Ukrainian comedian Volodymyr Zelensky has bailed on a presidential debate set to take place at Kyiv's Olympic Stadium. Singing a traditional Ukrainian song, incumbent President Poroshenko joked that he was stood up. 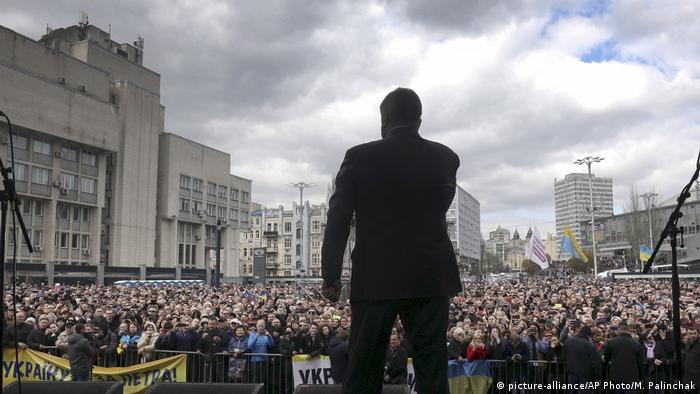 Leading Ukrainian presidential candidate and actor Volodymyr Zelensky failed to show up to a debate with the incumbent candidate, President Petro Poroshenko (pictured above), on Sunday.

The candidates are facing each other in a runoff election, which has seen Zelensky, a professional comedian, take a comfortable lead over Poroshenko. But Zelensky has yet to shed light on his policy positions.

"I do not like that a presidential campaign in Ukraine looks like a silent movie," Poroshenko said while standing next to an empty podium bearing Zelensky's name at the Olympic Stadium in Kyiv. "I must say: Ukraine's fate is in danger."

Poroshenko took Zelensky's absence as an opportunity to bolster his image. He sang an altered version of a Ukrainian folk song about a no-show date: "You told me on Sunday — We'll go to the debate together / I came, you didn't — You tricked me, let me down."

Read more: Ukraine: Is this comedian winning votes because of his political sitcom?

Despite revealing little about his platform, pollsters show the comedian winning the vote by up to 61 percent, with Poroshenko failing to poll over 24 percent. But Zelensky has agreed to another debate, scheduled to take place in five days.

Poroshenko is hoping to capitalize on his political experience by luring Zelensky into a debate in the hopes of depicting him as an amateur in Ukraine's complex political environment.

Pressed on whether he would accept the result if Zelensky wins, Poroshenko said: "It will be the election of the Ukrainian people, and I will respect it — any elections."

The runoff vote is expected to take place on April 21.

The ex-president is accused of doing business with people in parts of Ukraine controlled by pro-Russia separatists. Poroshenko could face up to 15 years in prison if found guilty.

Dozens of missiles struck the Ukrainian capital Kyiv and other cities, hitting critical infrastructure and knocking out power. This came after Zelenskyy delivered a video address at the G20 summit. DW has the latest.

Mikheil Saakashvili's partner said he has been transferred to "the most dangerous place for his life." He has been on hunger strike since his arrest upon returning from exile on October 1.