The Paris prosecutor has said there's no evidence to suggest arson was behind the blaze at Notre Dame. Authorities have assembled a team to probe the cause and interview workers involved in the site's renovations. 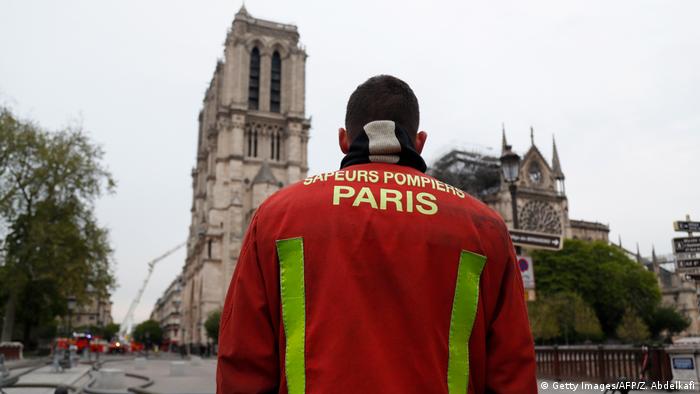 The cause of the massive fire that engulfed Notre Dame Cathedral was probably accidental, Paris Prosecutor Remy Heitz said Tuesday.

The blaze burned through the night and caused extensive damage to the 8-century-old Gothic structure, prompting its spire to collapse.

"Nothing suggests that it was a voluntary act ... We are favoring the theory of an accident," Heitz told reporters, adding that a team of 50 people were working on a probe into how the fire started.

He said the investigation would likely be "long and complex."

The prosecutor's office said police had started questioning construction workers who had been carrying out extensive renovations to balustrades and crumbling gargoyles at the site.

Hundreds of firefighters worked through the night to bring the fire under control. It was extinguished on Tuesday morning, some 15 hours after it broke out.

Officials who entered the charred edifice reported that despite significant damage and some weaknesses, the building's main structure had been saved. Staff from the fire department also managed to evacuate some of the artworks from inside the cathedral, the Culture Ministry said.

Authorities say the basic structure of the 12th-century cathedral, one of Europe's most visited landmarks, has been "saved and preserved." Investigators are looking into a link with renovation work being carried out. (15.04.2019)

More than a million protest against France's pension reform 31.01.2023

More than a million people took to the streets of Paris and some 250 other cities and towns across the country. For many, it's not a fight against just one reform, but against a vision of society they don't adhere to. DW spoke with some of them.

German Chancellor Olaf Scholz met with French president Emmanuel Macron in Paris to pay tribute to the historic Elysee Treaty. Signed in 1963, the agreement laid the foundation for close bilateral collaboration between the two former enemies.