Zimbabwe will have "free, fair, credible" presidential elections by July 2018, said the interim president. But analysts believe Mnangagwa is "not a very democratic individual" and "people should have no illusions." 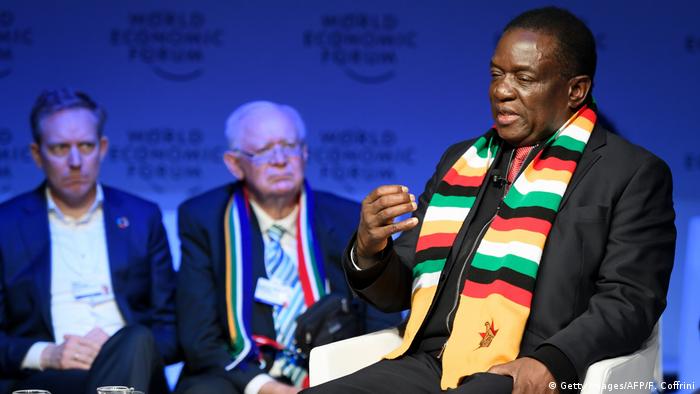 Zimbabwe's President Emmerson Mnangagwa on Wednesday said the country's first elections since the end of Robert Mugabe's 37-year rule would be held before July this year.

"Next month I will be able to make a proclamation of elections, so I believe that elections will not be in July, they will be earlier than July," Mnangagwa said speaking at the World Economic Forum in Davos, Switzerland.

The vote, which was previously expected in late July or August, will see the country elect a president and both houses of parliament.

Mnangagwa, who had been vice president until Mugabe sacked him, was sworn in as interim president in November last year following Mugabe's resignation.

"We want to have free, fair, credible elections, free of violence," 75-year-old Mnangagwa said, adding that he would welcome international observers.

"If you have that criteria, why would you want to deny international observers coming into our country? The EU ... I would welcome them."

Mnangagwa told the World Economic Forum on Wednesday that Zimbabwe was "open for business."

Under Mugabe's rule, government spending increased drastically and was partly used as patronage. More than 90 percent of the budget went towards civil servant salaries, which left little for investment needed to boost growth.

In the second half of Mugabe's rule, Zimbabwe's economy collapsed, especially after the violent and messy seizure of thousands of white-owned commercial farms.

But Mnangagwa said he would welcome former commercial farmers to return. "We don't want to think along racial lines, that is the philosophy of the past. Farmers are farmers," he said.

Some former cabinet ministers who served under Mugabe have been charged with corruption and Mnangagwa said Mugabe would not be immune from prosecution.

'People should have no illusions'

Despite, Mnangagwa's announcement of free and fair elections, Derek Matyszak, an analyst with the Institute for Security Studies (ISS) in South Africa, told DW in November that Mnangagwa was regarded as "extremely ruthless, shrewd and calculated" and that many people "hold him in fear and awe."

Read more: Emmerson Mnangagwa: the Crocodile who snapped back

"He is certainly not a very democratic individual. People should have no illusions," Matyszak said. "Mnangagwa has been at Mugabe's side for 50 years. He was considered to be Mugabe's fixer."

Zimbabwean cabinet sworn in amid criticism

Zimbabwe has a brand new cabinet. But the process did not go smoothly: public outcry forced the president to drop appointees at the last minute. (04.12.2017)