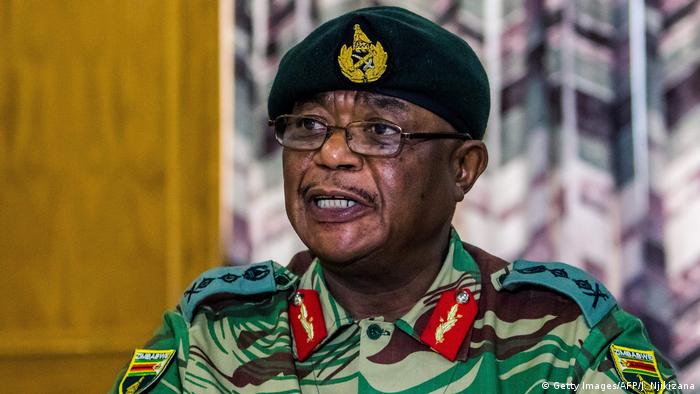 After just over a month in office, Zimbabwe's new president Emmerson Mnangagwa has named his two deputies. Constantino Chiwenga is seen as the military man behind the coup that brought former President Robert Mugabe's 37-year-rule to an end. Kembo Mohadi had served in several government positions in Mugabe's government. In November 2017 he became Minister of Defense and War Veterans.

Chiwenga caught international attention when he called a press conferenceand gave a warning to then-President Robert Mugabe's government. "Our peace-loving people who have stood by their government and endured some of the most trying social and economic conditions ever experienced are extremely disturbed by what is happening within the ranks of the national revolutionary party," Chiwenga told the press while surrounded by other high-ranking military personnel. He also spoke of "counter-revolutionary infiltrators who are now influencing the direction of the party."

Major General S.B. Moyo: "We are only targeting criminals around him"

Two days later, the military took control of Zimbabwe's national TV broadcaster ZBC and surrounded government buildings. This is not a coup, they insisted. "We are only targeting criminals around [Mugabe]," the army general SB Moyo said in a television address. Mugabe was, however, kept under house arrest and eventually forced to step down.

The takeover from Mugabe was the final step in the internal succession battle within ZANU-PF. With a general election set for mid-2018 and President Mugabe fast approaching his 94th birthday, it had long been rumored that the president's wife Grace Mugabe harbored hopes of stepping into her husband's shoes.

In 2014, Mugabe fired his then-deputy president Joice Mujuru. In November, 2017, Mugabe went on to fire vice president Mnangagwa. Mujuru and Mnangagwa had both been active members of the struggle for independence from Britain and had been close comrades and allies of Mugabe. But both politicians were said to have fallen out with his wife Grace Mugabe.

Just days before the coup General Chiwenga visited China, where he met Chinese Defense Minister Chang Wanquan. China described this as a routine military exchange between the two countries, but denied they had any hand or prior knowledge of the army takeover.

Following the military coup, many observers had speculated about whether the army would play a bigger role in Zimbabwe's new government. Besides Chiwenga, two other former generals joined Mnangagwa's cabinet and a third was named ZANU-PF party commissar. Chiwenga himself had stepped down as head of the army on Monday, December 18, 2017, making way for him to take up the post of vice president.

Zimbabwe's new president Emmerson Mnangagwa has laid out plans for his ruling ZANU-PF party. It's the first conference after Robert Mugabe had been ousted after 37 years in office. Elections are scheduled for 2018. (15.12.2017)