Yulia Tymoshenko is Approved as Ukraine′s Prime Minister | Europe| News and current affairs from around the continent | DW | 18.12.2007

Yulia Tymoshenko has been restored as Ukrainian Prime Minister after parliament narrowly endorsed her bid for leadership. A first round of voting was aborted due to fraud charges. 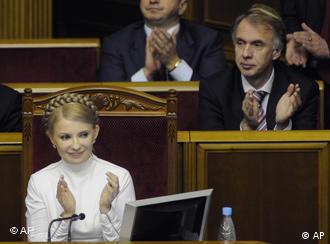 Tymoshenko is pleased with her victory, which took two rounds of voting

In the second ballot, Tymoshenko needed 226 votes from the 450-member parliament to secure her place as the new head of government. And that is exactly what she got.

The first vote, which was aborted last week following claims by her party that the electronic polling equipment had been tampered with, saw Tymoshenko defeated by just one vote. 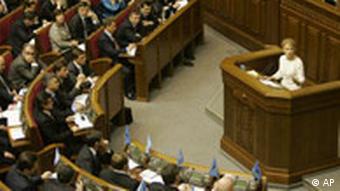 Tymoshenko speaks before parliament in Kiev

This time, however, there could be no doubt about the validity of the ballot. It was conducted by roll call in which each deputy was asked to state their position publicly.

Tymoshenko's adversaries, who controlled just under half of parliament, did not take part in the show-of-hands poll, and it was not clear until the very last vote was cast how the axe would fall.

The fact that the result was ultimately so close leaves her opposition party, led by pro-Russia outgoing Prime Minister Viktor Yanukovych, in a strong position. Speaking to the assembly after the ballot, he predicted that his opponent's return to power would bring renewed instability to the former Soviet country.

"We all remember full well how it was when you were in office last time and how it all ended. Within less than a year, the economy shrunk by nearly 10 percent and prices rose," he said, adding that the people of Ukraine could expect no improvement in their lives.

Tymoshenko rose to fame when she and President Viktor Yushchenko led the 2004 Orange Revolution protests that forced a re-run of a rigged presidential election victory by Moscow-backed rival Viktor Yanukovych.

When Yushchenko won the re-run, he appointed Tymoshenko as Prime Minister, but in-fighting brought her term of office to an early end just a few months later. 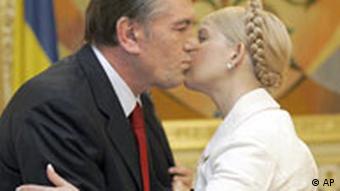 A new era for Yushchenko and Tymoshenko

Although Yushchenko was absent from Tuesday's ballot, he posted a statement on his Web site in which he claimed the results were evidence that they could succeeed in tackling the country's top priorities.

For Tymoshenko, those priorities are the implementation of reforms. She has pledged to uphold the ideals of the 2004 Revolution, building closer ties with the West and eventually seeking EU and NATO membership.

Meanwhile, after Tymoshenko's Tuesday election, Ukraine's parliament named a pro-Western foreign minister. The parliament voted 227-0 for Volodymyr Ogryzko, who has been serving as deputy foreign minister and agrees with the ex-Soviet republic joining NATO and the European Union.

The new Prime Minister has also vowed to clean up corruption and press ahead with vital economic, judicial and political reforms, including a corruption-free privatization program.

German Foreign Minister Frank-Walter Steinmeier welcomed the election results and described them as "an important first step on the road to a stable government." He said Tymoshenko's coalition needed to proceed with courage, and he promised Germany's support on the road to reform.

Former Ukraine Premier Yulia Tymoshenko looks set to return to her old job after opposition parties agreed to form a coalition. But the new government is also expected to hand out key posts to its rivals. (16.10.2007)

Results showed that the parties of the "Orange Revolution" have a slight lead over Ukrainian Prime Minister Yanukovych's pro-Russia party, but both sides are claiming victory as charges of election fraud were made. (02.10.2007)