Former Ukraine Premier Yulia Tymoshenko looks set to return to her old job after opposition parties agreed to form a coalition. But the new government is also expected to hand out key posts to its rivals. 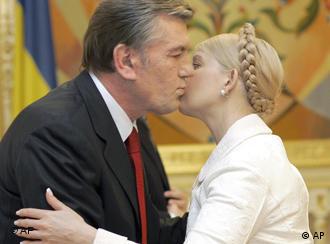 Yushchenko and Tymoshenko are getting cozy again

Tymoshenko, the leader of her eponymous party, and the heads of Our Ukraine-People's Self Defense bloc sealed the agreement after a meeting with President Viktor Yushchenko on Monday, Oct. 15.

Earlier, official results from the Sept. 30 election confirmed that the so-called "orange parties" won a thin majority of 228 seats in the 450-seat chamber. According to news reports, another party with 20 seats could still join the coalition, giving it a comfortable majority.

A fresh start in parliament?

"Power has changed in Ukraine and we have achieved the result we had hoped for," Tymoshenko told reporters, according to Reuters news service. "The parliament is new, those in power are new. The democratic team has all grounds to reform all sectors of life so that people feel tangible changes in the country."

As leader of the larger coalition party, Tymoshenko is expected to become prime minister, a job she already held for eight months in 2005.

Although she was a close ally of Yushchenko during the 2004 Orange Revolution, she lost her job after a fall-out with the president over reform projects.

Including the opposition in government 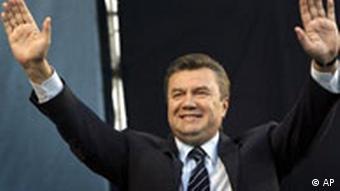 The party of Tymoshenko's main rival, pro-Russian Prime Minister Viktor Yanukovych, will be the largest bloc in parliament with 178 seats. But together with its communist allies, it commands only 202 seats.

President Yushchenko, however, has called for a grand coalition and wants the orange coalition to hand key posts to their rivals. Tymoshenko's bloc has signaled a willingness to grant some important posts -- a deputy prime minister and some assistant ministers -- to the new opposition.

Key parliamentary votes are due in Ukraine this week to finally resolve a long-running political crisis by setting the groundwork for early elections. But some fear even these steps won't heal the ex-Soviet republic. (28.05.2007)

Ukrainian President Viktor Yushchenko launched a political showdown Friday when he ordered troops to secure government buildings. A German diplomat warned the move could harm the Ukraine's relationship with Europe. (25.05.2007)

Ukraine Gripped by Stalemate as EU Waits For Compromise

Do you think that the new government will be good for Ukraine? Please include your name and country in your reply.