Yulia Tymoshenko: Democracy Is Beginning in Ukraine | Europe | News and current affairs from around the continent | DW | 21.08.2007 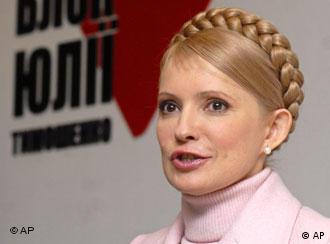 Tymoshenko is critical of Russia

Yulia Tymoshenko heads Ukraine's BYuT political alliance. She was a leader of Ukraine's so-called Orange Revolution in the winter of 2004-2005 and subsequently served as the country's prime minister for seven and a half months, until September 2005.

DW-WORLD.DE: What are Russia's aims when it comes to Ukraine?

Yulia Tymoshenko: Russia is trying to keep Ukraine within its sphere of influence. It's taking advantage of all of Ukraine's historical dependencies to do so, energy dependency among others. And it's using the quarrelling of Ukraine's elites. The longer Russia intends to maintain this system of dependency, the longer our relations won't be able to normalize.

Do you think Russia deals too harshly with its former satellite countries?

All the countries of the former Soviet Union are independent today. They have the right to formulate and to realize their own national interests. I believe it's the wrong tactic if Russia tries, with the help of various instruments, to restrict the freedom of these states.

At the same time, Russia is not alone responsible for how relations develop. Above all, the political leaders and elites in the post-Soviet countries -- who, despite their dependency, still haven't shed the role of vassals and politically and economically subordinate themselves to Russia -- are guilty. I cannot respect such politicians, and I believe that they should leave the political arena. Ukraine needs politicians who strengthen the independence of the country and, at the same time, are in the position to build harmonious, fair and honest relations with neighboring countries. 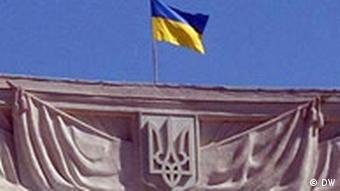 You say there's a tendency in Russian politics to rekindle expansionism. What role should Ukraine take in the fight against Russian expansionism?

Ukraine's role is important in the field of energy above all. Ukraine is the bridge between the countries that possess lots of resources and the European Union, countries that need those resources. Ukraine is a transit country, and that's why we see our role in the development of numerous transport routes that allow diversification of the supply of energy resources to Europe and to Ukraine. We know that Ukraine can build the necessary transit pipelines for gas -- in addition to the necessary oil pipelines that already exist. We know that we can supply the EU with a large amount of electricity at affordable prices. And Ukraine should be able to carry out this function freely.

Why does your political platform include integration into the European Union and not integration with Russia in the framework of a uniform economic area?

The European countries, especially those of the old Europe, don't want to see Ukraine in the EU soon. At the same time, two-thirds of our country is not prepared to see themselves as part of the authoritarian entities that currently surround Russia. That's why, in the short or mid-term, Ukraine will put things in order and introduce European standards at home, and only then discuss all the possible processes of integration.

Russia is pursuing a tougher foreign policy at the same time as Ukraine is sinking under the weight of internal crises and possesses no consolidated foreign policy line. Aren't you jealous of Russia in this respect? 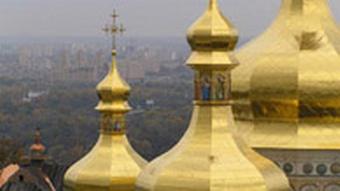 Ukraine is a bridge between the EU and Russia

No, on the contrary, I think that order can come to Ukraine much sooner than to Russia. We are in the midst of a certain amount of chaos, but this chaos is the beginning of a genuine democracy. Sometimes strict order -- which our neighbors have -- is an impediment on the route to harmony within one's own society. And that's why I think many post-Soviet states will soon envy Ukraine. I reckon we need another two or three years to develop our own strategic line and to choose the right direction.

What do you think of Ukraine joining NATO?

Ukraine is quite divided on this question. You can't overlook that when you make policy. That's why the political powers in Ukraine should start a broad discussion about all the world's security systems. Not all politicians are familiar with the work of this or that security system -- let alone the people. That's why all discussion of joining NATO is very speculative. Our parties will take up this discussion, and we are sure that Ukraine can only approach this or that collective security system through a referendum. Whether politicians like it or not, in such strategic questions they should rely on the opinion of the people. Personally, I think Ukraine fits with the European collective security system.

Do you see yourself as president of Ukraine in 2009?

To be honest, I don't see it so narrowly. Not because it would be too small a goal for me, but rather because my thoughts are only directed towards far-reaching changes in Ukraine. From which position I can best bring about these changes depends on the political situation: whether in power as president, prime minister or at the head of the opposition. But the main goal for us is a Ukrainian breakthrough.

"Only Democracies, Not Bullies, Are Worthy of Respect"

DW-WORLD.DE spoke to Estonian President Toomas Hendrik Ilves about the challenges facing his country and its stormy relationship with Russia. (13.07.2007)

Key parliamentary votes are due in Ukraine this week to finally resolve a long-running political crisis by setting the groundwork for early elections. But some fear even these steps won't heal the ex-Soviet republic. (28.05.2007)

At a meeting with German Chancellor Angela Merkel in Berlin, Ukraine's President Viktor Yushchenko said on Thursday his country was conscious of its responsibility to be a reliable energy partner for Europe. (08.02.2007)