Your stories: 'They say it's the victim's fault'

At age 13 Halimatu was forcibly cut, together with her two sisters. She is the only one who survived. Now she's gone back to the place where it happened - not only to face her past, but also to raise awareness for FGM. 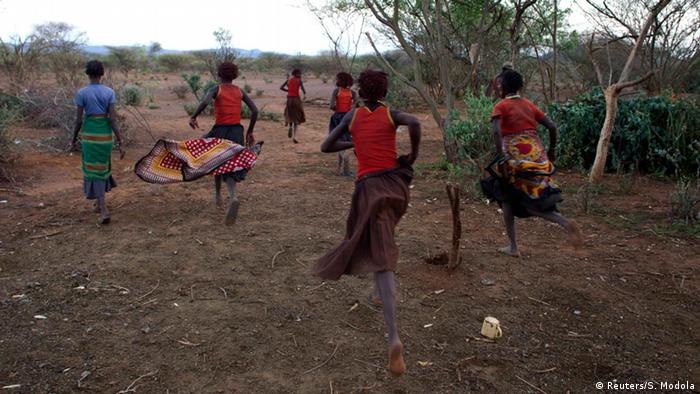 Halimatu reached out to us on our Facebook page, leaving a comment:
"I was 13 when I was forced to undergo FGM. We were three girls; unfortunately I was the only one to survive. Today, I'm 29 and the pain is still so real, both emotionally and physically. I'm interested in telling my story."

We asked her some further questions about her story via email:
I was born in Liberia, in a tiny village called Kotima, in Fola county. Due to the civil war I was adopted by a Muslim couple from Sierra Leone when I was three years old. I grew up there along with their three biological children: two girls and a boy. They were very nice but had strict cultural beliefs.


You've pointed out that FGM is normal where you are from. Can you explain why people think it is normal?

I'd say it is a religious issue: They say it says in the Koran that women are to be circumcised.


Where did it all happen?

My two elder sisters and I were taken to our aunt's place. My sisters were 16 and 14, and I was 13 at the time. All of the sudden we saw all our family members; people were singing and dancing. I was very nervous and immediately started throwing up. I am crying now... I have never talked about this in detail, but I remember every single moment of that day vividly. My 16-year-old sister stood up and ran away - and her mother was the one to chase her and bring her back in. She was the first one they cut; the second one was my middle sister. I didn't see when they were cutting them and I was the last. My eyes were tied and my foster mum took my hand and led the way. They asked me to lay down, which I obviously did. Suddenly I felt this unbelievable pain. I started fighting and managed to pull the cloth from over my eyes: My aunt sat on my chest and then they cut me. It's so painful it's impossible to bear. The even more upsetting part about it, is that they do these harmful things to babies as young as 7 days old.

They took me into a small room. My sisters were already there. When my elder sister wanted to urinate, she started bleeding. Overnight it became worse. On the fourth morning my middle sister started bleeding. It was shocking. We were miles from the nearest town, they could not take them to hospital or even seek medical help. According to the custom there, it is taboo for a man to see you at that time. On the seventh day after the cutting, my middle sister died at the age of 14 … oh my God. I became distracted from real life. When my elder sister died the following morning, my world changed. You know what? In that part of the bush, when you die, it's your fault. The victim's fault - can you believe that? Since that day I have never been the same.


You mentioned that you are married - can you talk openly with your husband about the issues you have due to FGM? How does he react to your pain?

My sexual life is very painful and an everyday challenge with my husband. At first, it was difficult to talk to him about it but I gathered the necessary courage. However, he doesn't support me at all in healing. It hurt me a lot when he mocked me, saying I'm not sexually active - ridiculing me like it was my fault. It wasn't my idea to get cut, I did not have a choice. And although the feeling of having sex is great, the pain of physical contact during it is very abnormal compared to what my friends have explained to me.

I've had two operations - for the births of my two children. I'm mother to a daughter - and I would never even think about putting her through what I went through.


If you look at society and at your community, do you think there's a chance for change, a chance to end FGM?

Many people are still practicing it, because even some politicians are avid supporters, saying they don't want to eradicate their culture completely. So they just act as if they are against it to avoid international attention - and thereby ignore the teens that are dying, they don't mind them. They are all the same.

And one of the greatest reasons why it's difficult to eradicate FGM in Africa is that from a very young age, our parents, and especially our mothers, make us feel that this part of our bodies isn't meant to exist. They say it is a taboo to have it. Even though their children are bleeding to death every day, they deny it is their responsibility; they say it is the victim's fault. That's barbaric.


What would you say needs to happen to achieve change?

In May, I went to Sierra Leone, to the village where I was raised, to sensitize people to the dangers of FGM. Recently one of our neighbour's daughters became paralyzed in one leg after she was cut. I don't know exactly what happened to her medically.

My journey there wasn't sponsored by anyone, I organized and paid for it myself - though I would love to link up with an organization that can help me spread my message. I went to my village my best friend Martha, who also is a victim of FGM. I also brought my 7-year-old son with me. But I left my 2-year-old daughter behind, out of fear that people there would take her from me and cut her also. The holiday season is normally the time when circumcisions take place, that's why I am going back to the village again in December so I can continue making progress.


How was going back there for you, how did you feel? Were you frightened because all the memories came back or where you angry about what happened to your neighbour's daughter?

I was both angry and disappointed at the level of evil, their level of wickedness. Angry too, to see the same people who changed my whole life by killing my sisters and taking an essential part of my body a decade and a half ago. And disappointed by the way they crippled that young girl all in the name of cultural heritage and religious beliefs.


How did the people in your village react to your attitude? Do you think one day the practice can be eradicated by raising awareness among communities?

I summoned all the women that are involved in this act, including my grandma, who is the head of all the excisors. I wanted them to understand how this is affecting us - women like me - and what the dangers are. At first it wasn't easy, they were very defensive, saying I came to eradicate their cultural beliefs. But the most encouraging part is that when I talked to some of the teenagers they were ready to say no to FGM. That gives me some hope.

I will be traveling there again in December to continue where I left off. It is important that organizations come to Sierra Leone and Liberia to raise awareness and sensitize people to the dangers of FGM by talking to them. Because not everyone here has access to the Internet to read about the dangers of the practice. That's why I'm also planning on writing a children's book on FGM. I want to distribute copies of it to various primary schools in my district.

I think it will be possible to eradicate the practice one day, by creating awareness and giving the younger generation the power and the voice to say no to FGM!

The pain of being cut and the trauma of having something stolen from you - female genital mutilation (FGM) affects 140 million women worldwide. Meet young women dealing with having been cut.

#endFGM: The scope of the problem in graphics and numbers

It's considered a violation of human rights, nonetheless two million girls undergo female genital mutilation (FGM) each year - adding up to 140 million cases. This graphic series shows the scope of the problem.