Jailed for his activism in Syria, the rapper Abu Hajar and his band Mazzaj Rap are pursuing their fight for justice in Berlin. They've found freedom of expression in the city - but also face humiliation as refugees. 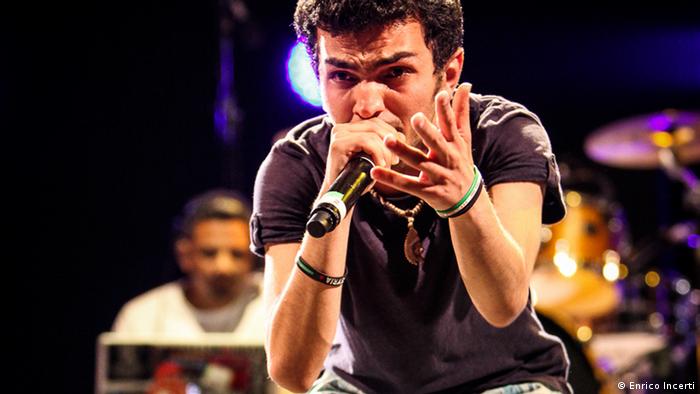 It's after midnight in one of Berlin's oldest surviving squats and around 200 people are rocking to the beat of a Syrian rap band, the lead MC singing about his and his band mates' persecution at the hands of the Assad regime. "You want freedom?" implores the young man in Arabic as English lyrics flash on the back wall amid silhouettes of torture and interrogation in a Syrian jail. "Yes, and we want all the detainees!" he rejoins, the words echoed loudly by a group of Syrian men and women at the front of the packed room who raise their arms in solidarity.

In ways, it's a fairly typical night in Berlin as punks, activists, rap music lovers (six such bands will perform till 3:00 am) and exiles from the Middle East, Africa and beyond move to infectious electronic beats, high-energy live percussion and politically charged rhymes. Yet the young men on stage made an improbable journey to get here. Banned from playing rap music in the country they fled, some made it out of prisons where friends and family continue to languish - if indeed they are still alive.

Before Mazzaj Rap start their set at Köpi, a cavernous old tenement building squatted in 1990 and a bastion of alternative culture in Berlin, a man on crutches excuses himself as he negotiates the crowd. "I'm sorry, I was shot by the Syrian regime," he says.

But like the band on stage, the man did not seem to be looking for pity. Despite the harrowing stories that were being told (the "We Fed Up" is "dedicated to all the political detainees and their mothers"), this was a show of defiance, the continuation of a popular revolution, a struggle for freedom and dignity in the face of decades of oppression (under Bashar al-Assad and now ISIS) that is often lost amid media hysteria over faceless refugee hordes breaking down European borders.

MC Abu Hajar is the 29-year-old lead rapper and chief songwriter for Mazzaj Rap. Granted political asylum in Berlin in late 2014, Abu Hajar calls himself an economist, musician and political activist. He was jailed for his music and activism by a Syrian dictatorship that has long used arbitrary detention to crush dissent.

When first detained by police as a university student in 2007, Abu Hajar was charged with distributing political pamphlets. But the real reason for his capture was the outlawed rap music he played, and a song he wrote that criticized honor killings of women by men in Syria.

Banned from university, Abu Hajar relocated to Jordan to continue his studies but returned to Syria more regularly in early 2011 to join the first peaceful protests for civil rights. Within months, a revolution had spread across the country and Abu Hajar believed the regime would soon fall. But on the first anniversary of the protests he was back in detention, the victim of a vicious crackdown. 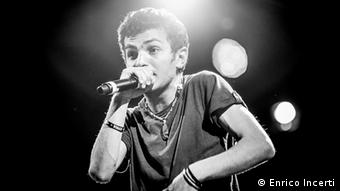 Telling his story in a Syrian cafe in the polyglot Wedding district of Berlin, Abu Hajar points to a man at the next table with long hair, the Mazzaj Rap percussionist with whom he was arrested in March 2012. The two were beaten and accused, without evidence, of unauthorized political activity. They shared a cell as they underwent daily torture, from whippings to hits with electric prods.

Fearing that he would die like many other detainees, Abu Hajar was unexpectedly released two months later. But he was soon pursued again by secret service agents and fled to Lebanon before traveling to Europe. After studying in Rome, Abu Hajar decided to move to Berlin as the war in Syria escalated.

Abu Hajar came to Berlin because its reputation for tolerance and diversity had long attracted Syrian political refugees. Since arriving, he has helped form a Syrian activist network that rallied hundreds at Brandenburg Gate in March to mark the fifth anniversary of the revolution. His music has also flourished as he records, performs and collaborates with musicians from around the world. 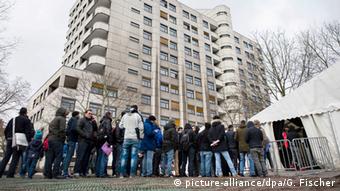 But despite his newfound freedom of expression, and a relationship with a German woman, Abu Hajar expresses deep frustration at living as a "humiliated refugee in Germany." For all the "Refugees are Welcome" signs in the capital, he says he has seen and experienced much racism.

Watching newly arrived refugees stand for days in the cold while waiting to be processed, Abu Hajar has documented how some were beaten and insulted by guards. The subject is a major theme of the new album he is now recording.

"And who will give housing to a refugee?" he asks. "On every application I write: I'm Mohammad, I'm not a terrorist." Talking soon after the March terror attacks in Brussels, Abu Hajar fears that Syrian refugees will suffer the consequences - even if many, like himself, do not follow Islam.

As far right anti-immigration sentiment appears to be gaining ground throughout the country with popular movements like PEGIDA and the political party Alternative for Germany, Abu Hajar says he would go home if he could. In the meantime, he wants to study to get a PhD in Germany, to continue the revolution in exile, to tell, through his music, the true story of why he and many other Syrians came to Europe.

Back at Köpi, the Mazzaj Rap members smiled as Berliners cheered, whistled and demanded an encore. For them, and perhaps their injured comrade on crutches, the moment was a short triumph in a long fight for dignity.