A day after Saudi-backed militiamen retook Aden's airport from Houthi rebels, the Yemeni fighters have captured the city's main port. Their latest gains have been described as the biggest setback to date for the rebels. 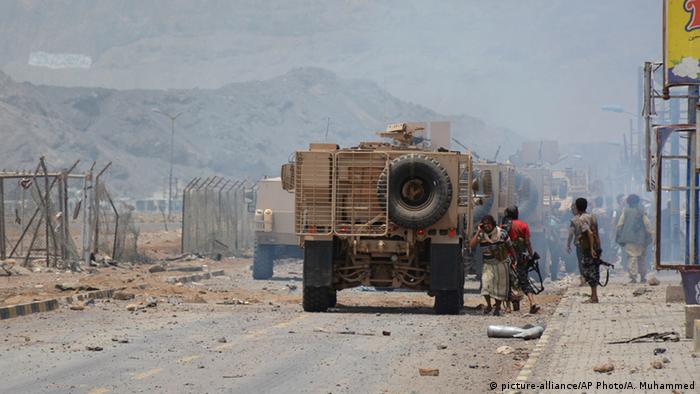 Heavy clashes between Saudi-backed Yemeni militiamen and Houthi rebels took place around Aden's port and the neighboring Mualla district on Wednesday before the Houthis withdrew their fighters.

Dozens of combatants and civilians have been killed over the past two days, according to doctors at the southern city's main hospital.

The capture of the port came a day after the fighters loyal to Yemen's exiled president wrested the city's airport and another district from the Houthis.

The Reuters news agency reported that about 40 armored vehicles helped in the battle to win back control of the airport.

On Wednesday afternoon, Yemeni militiamen used intensive sniper fire in an attempt to seize another area called Crater, close to the Sira Fortress.

Residents described seeing scores of fighters on the streets as part of the militiamen's offensive dubbed "Operation Golden Arrow."

The anti-Houthi forces say they're now focusing on capturing an area between the airport and a peninsula where much of the city lies.

Earlier this year, the rebels pushed into the south and east, heading for Aden, Yemen's main port and second city.

In March, Saudi Arabia and other Arab States stepped in, launching airstrikes on Houthi positions and providing financial and military backing to Yemeni groups loyal to Hadi.

The latest fighting further breaks a UN-brokered truce that was due to begin last Friday but which failed after just a few hours due to coalition airstrikes on Houthi positions.

The pause in the fighting was meant to allow aid agencies to deliver vital supplies to around 13 million people close to famine and many in urgent need of medicine.