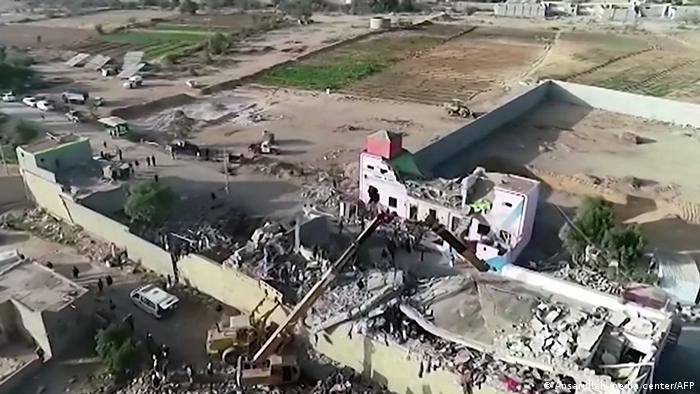 The airstrike in Saada left at least 70 people dead

At least 70 people have been killed after an airstrike by the Saudi-led coalition hit a detention center in northern Yemen on Friday, the Red Cross said.

The incident happened in the northern city of Saada, a stronghold of the Iran-backed Houthi rebels who have been waging a war against the Saudi-backed government for several years.

"Over 100 detainees killed and injured," the International Committee of the Red Cross (ICRC) in Yemen said. Doctors Without Borders said separately that the number of wounded alone was "around 200" people

"There was a targeting of a detention center in Saada and currently ICRC teams are inspecting the location to verify the numbers of dead and injured," Basheer Omar, spokesperson for the ICRC in Yemen, told the AFP news agency.

The charity Save the Children said that the total death toll from a series of airstrikes on Friday and Thursday night stood at over 60, including three children.

The Saudi-led coalition denied having carried out the strike in a Saturday statement.

Reports of the targeting of the rebel-held facility are "baseless and unfounded," said coalition spokesman Turki al-Malki, adding that the coalition will share information on the facility with the the ICRC and the United Nations' humanitarian affairs office in Yemen.

The airstrike happened early in the morning and by midday, rescue workers were still pulling bodies out of the rubble.

Residents in Saada told the EFE news agency that there were three airstrikes from coalition planes, but Riyadh did not confirm having a role in the attack.

A witness told Reuters news agency that African immigrants were among the deceased. Despite the ongoing conflict, migrants still cross into Yemen across the Horn of Africa hoping to reach Saudi Arabia or other wealthy Gulf states.

The strike also coincided with a nationwide internet blackout, according to web monitor NetBlocks. The Houthis said that a separate coalition strike had hit a communications hub in the port city of Hodeida.

The coalition confirmed that it had carried out attacks against "Houthi military capabilities" in Hodeida, Bayda province and the Houthi-led capital Sanaa.

The airstrikes come after the Houthi insurgents claimed responsibility for a drone attack that killed three people in the city of Abu Dhabi in the United Arab Emirates.

The UAE is a key member of the coalition fighting the Houthi militants.

Saudi Arabia and its allies first intervened in the Yemeni conflict in March 2015 after the Houthis forced the internationally recognized government in Sanaa to flee.

The fighting has killed tens of thousands of people already, displacing millions more and pushing Yemen into a humanitarian crisis.

Stephane Dujarric, Guterres' spokesman, said further deadly airstrikes had been reported elsewhere in Yemen, with children among those killed.

"An airstrike on telecommunications facilities in Hodeidah has also significantly disrupted vital internet services across much of the country," Dujarric said in a statement. "The Secretary-General calls for prompt, effective and transparent investigations into these incidents to ensure accountability."

The UN's envoy for Yemen, Hans Grundberg, called on both sides to "exercise maximum restraint" on Friday while expressing concern for the military escalation.

"We are very concerned... It's not acceptable," Mona Juul, the Norwegian ambassador to the UN and current president of the Security Council said in reference to the airstrikes on Friday.