A ceasefire in Yemen is likely to go into effect ahead of peace talks later this month, the UN envoy to the country has said. Previous talks in June broke down before parties even had a chance to meet. 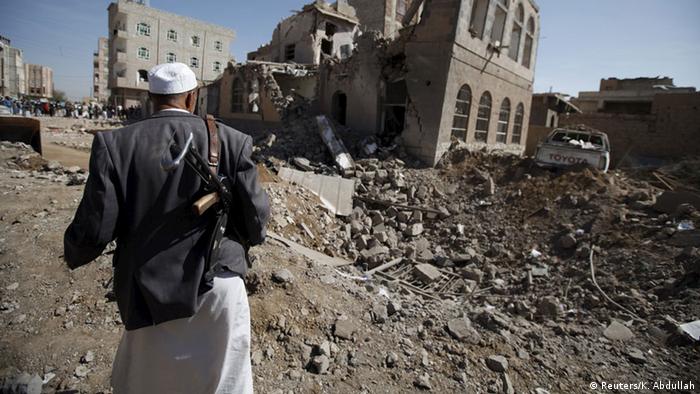 Ismail Ould Cheikh Ahmed, the UN's Yemen envoy, said three delegations representing the warring factions would meet on December 15 for talks to end a nine-month old conflict that has left 80 percent of the country in need of humanitarian assistance.

A ceasefire and confidence-building measures are likely to go into effect as representatives from President Abed Rabbo Mansour Hadi's government, Houthi rebels and forces loyal to former President Ali Abdullah Saleh sit down for talks near Geneva, he said.

On a visit to Yemen over the weekend, Ahmed said he had secured Hadi's commitment to a ceasefire. The Saudi-led Gulf Arab coalition had made Hadi's approval a prerequisite for joining the ceasefire.

Previous UN-brokered talks in June collapsed before the warring parties even sat down at the negotiating table.

The multifront conflict has pitted Houthi rebels and forces tied to former President Saleh against forces loyal to Hadi, southern Yemeni secessionists, tribal forces and elements of al-Qaeda and the so-called "Islamic State."

The Houthi group swept Hadi from power in February as part of what it called a revolution against corruption, accusing Hadi of being beholden to Saudi Arabia and the United States.

In March, Saudi Arabia alongside Sunni Arab states launched a military campaign to oust the Houthis in a so far unsuccessful bid to restore Hadi to power.

The Saudi-led campaign has widely been condemned by the UN and monitoring groups as indiscriminate and needlessly destructive.

Germany's foreign intelligence agency BND has released a disparaging report on Saudi Arabia. Their assessment says the country is destabilizing the Middle East with proxy wars in Yemen and elsewhere in the region. (02.12.2015)