Armed men, suspected to be linked to al-Qaeda, have abducted UN staff in Yemen. They have put forth their demands and talks for the workers' release are ongoing. 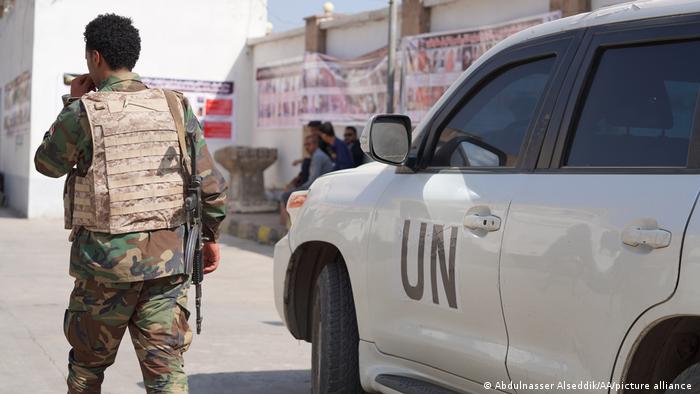 They were taken in the province of Abyan late Friday while returning to Aden, Yemen's temporary capital, after a field mission, the UN confirmed.

"The United Nations is in close contact with the authorities to secure their release," said Russell Geekie, spokesman for the top UN official in the country.

The UN Secretary-General's spokesperson said they were aware of the case but refused to comment "for obvious reasons." He did not elaborate.

The Yemeni government identified the abducted UN staff as four of its nationals and one foreigner.

They worked with the UN Department of Security and Safety, it said, adding that the government was working to secure their release.

What are the abductors' demands?

Tribal leaders said they were in talks with the abductors to secure the workers' release.

The abductors, they said, demand a ransom and the release of some militants imprisoned by Yemen's internationally recognized government.

What's the situation in Yemen?

The country, one of the poorest in the Middle East, has been convulsed by civil war since 2014.

It began with Iran-backed Houthi rebels taking control of the capital Sanaa, and the northern parts of the country.

The internationally recognized government was ousted and forced to flee to the south.

A Saudi-led military coalition intervened in the civil war and has been fighting the Houthis since 2015.

The war has left thousands of people dead, displaced millions of others, and led to severe shortages of food and other essential goods in Yemen.

US sends fighter jets to UAE

The US Air Force on Saturday said F-22 fighter jets had arrived at an airbase in the United Arab Emirates.

Earlier this month, Washington promised to deploy a guided-missile destroyer and fighter jets to assist the UAE. This was after the Houthis launched a series of missile attacks against the UAE, a key member of the Saudi-led coalition.

The attacks, in response to a series of ground defeats in Yemen, have opened a new front in the seven-year war.

Opinion: No price tag is too high for humanitarian work

$41 billion — that’s what aid agencies need to help people facing war, disease and hunger around the world in 2022. It's more than ever before, writes Martin Griffiths.