Would a federal Ukraine be viable?

The ruling Party of Regions has mooted a federation as a possible way out of crisis for Ukraine. But far from defusing tensions, the opposition believes giving more power to the regions would cause the state to collapse. 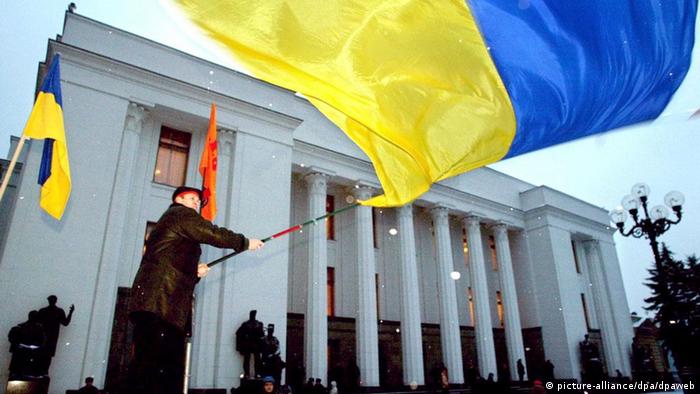 Article 2 of the Ukrainian Constitution defines Ukraine as a unitary state. Its capital and center of power is Kyiv. The country, which regained its independence following the disintegration of the Soviet Union in 1991, is divided into 24 districts (oblasts) and the Autonomous Republic of Crimea.

So far, the president, the government and parliament have always had authority over nearly everything, from taxes to language policy. But now it seems that the continuing political upheaval in Ukraine is threatening to rip the country apart.

Today (22.02.2014) legislators and officials sympathetic to Yanukovych as well as some Russian lawmakers gathered in Kharkiv, a city in the Russian-speaking east of Ukraine. As pro-Western protesters outside shouted "Ukraine is not Russia!", the officials, from predominantly Russian-speaking areas, approved a resolution for regional leaders to take full responsibility for constitutional order in their territories.

There has been vocal support for Viktor Yanukovych's ruling Party of Regions in the east and south of the country - traditionally strongholds of the party - which could embolden the party to try to exploit the current political crisis in order to turn Ukraine into a federation.

Party of Regions warns of disintegration

The idea is not new. In early February, the parliamentary newspaper Holos Ukrainy (Voice of Ukraine) printed a proposal by the Communist Party "regarding possible amendments to the Constitution." According to these amendments, Ukraine should become a federal state. The Communists are allies of the ruling Party of Regions and often vote together.

A few days before the proposal was published, a Party of Regions parliamentarian, Vadim Koleznichenko, spoke in favor of a "federalization of Ukraine," since the country was on the brink of civil war, as the online newspaper Ukrainska Pravda quoted him saying. He said that citizens in the east and south of Ukraine see the opposition protests in Kyiv as a "threat" to them. Federalization, he said, would help to prevent the country from falling apart. According to media reports, this would mean Ukraine could be divided into up to seven large states, each with its own parliament. 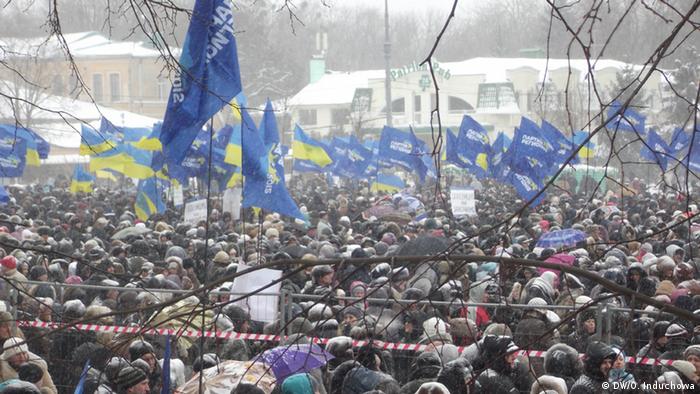 There were anti-Maidan rallies in the south and east, such as in Kharkiv

Moreover, Viktor Medvedchuk, a consultant to Andriy Klyuyev, the head of the presidential administration, has also spoke out in favor of the idea. "Federalization is the one and only medicine against the disintegration" of Ukraine, he wrote in his blog.

Medvedchuk is also the leader of the Ukrainian Choice organizaion, which wants an alliance with Russia and is opposed to closer ties between Ukraine and the European Union. This movement has had little impact on Ukrainian politics - officially, at least. However, Medvedchuk is a close friend of Russian President Vladimir Putin.

There has already been heated debate about whether or not Ukraine should be a federation. In the early 1990s, the Crimean peninsula wanted to secede; and during the Orange Revolution in 2004, regions in the east and south of the country threatened to form their own republic.

But this time it could be serious. The ongoing protests in Kyiv, which at least superficially seem to be the work of western Ukrainians, have been widely rejected in the east. There, many people still feel connected with Russia. They often watch Russian television, which portrays the events in Kyiv as a "far-right coup d'etat."

Opposition leaders have not yet commented on the idea of a federal Ukraine - with the exception of former Member of Parliament Vyacheslav Kyrylenko. He has warned in a blog against federalizing the country. "This is just the first step," he said, adding that the second step would be to split off eastern Ukraine and destroy the independent state. His blog entry speculated that Russia was behind these plans.

Whether a federation could actually come about in Ukraine depends on parliament. To change the constitution requires 300 of 450 members voting in favor - significantly more than the ruling Party of Regions can muster. 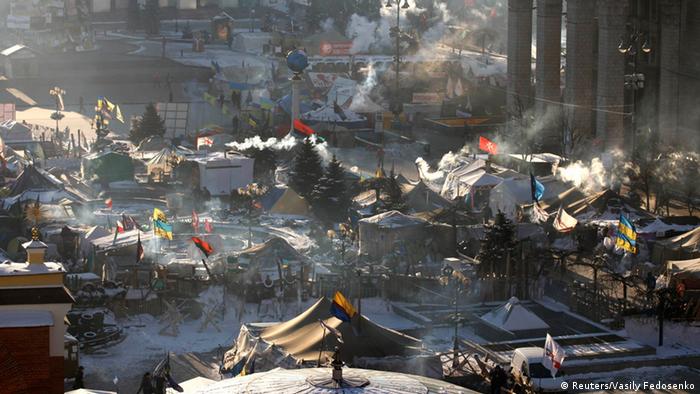 How the population would react to a federalization of Ukraine is also unclear. Sociologists have avoided carrying out surveys, in order to "let sleeping dogs lie," as Volodymyr Paniotto, director of the Kyiv International Institute of Sociology, put it. There are therefore no numbers available.

Speaking directly to the people on the streets of Kyiv, most are skeptical. "Ukraine as a federation would not be bad if it were democratic, like in Germany," said a man clearing ice from the Kyiv protest area with a shovel. But he rejected a federation along Russian lines.

"Russia is only a federation on paper," he said. "The real power is in the Kremlin." He also added that a federalization of Ukraine would lead to disintegration., speculating that "Russia is just waiting to seize the Crimea for itself."

Another passer-by was even vocally opposed to a federal Ukraine. "We are not a multi-ethnic country like Russia," he said. "We are all Ukrainians, whether in the East or in the West."

Even government supporters do not seem especially convinced of the idea. "The unity of Ukraine is very important," said Oleksandr Zinchenko, commander of the so-called Anti-Maidan, a tent camp of government supporters in Kyiv's Mariyinsky Park. He told DW that it was "not yet time" for federalization, and that Ukraine was neither economically nor psychologically prepared for it. However, he did think that it was an "interesting idea for later."

The Ukrainian government and opposition has agreed (21.02.2014) on a timetable to end the crisis. But Ukraine expert Winfried Schneider-Deters, who's spent a lot of time on the Maidan, doesn't think it'll bring peace. (22.02.2014)

As Ukrainian President Viktor Yanukovych agrees to hold early elections, the Russian media paint a grim picture of Ukraine as a nation that has lost trust in all authority, steadily slipping into chaos and civil war. (21.02.2014)

An opposition activist kidnapped and brutally tortured, Dmytro Bulatov has come to symbolize the protests in Ukraine. Now he is to receive treatment for his injuries in the West. (02.02.2014)