Russian media paint a dark picture of Ukraine | Europe| News and current affairs from around the continent | DW | 21.02.2014

As Ukrainian President Viktor Yanukovych agrees to hold early elections, the Russian media paint a grim picture of Ukraine as a nation that has lost trust in all authority, steadily slipping into chaos and civil war. 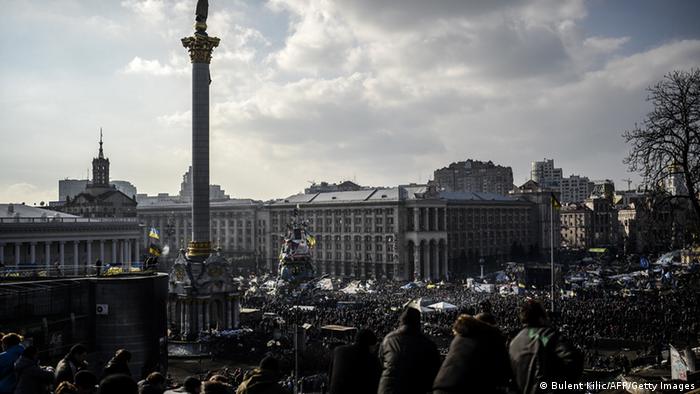 Izvestia, a pro-Kremlin daily, leads with a report on the life of ordinary citizens living in or near Kyiv's Maidan, the center of ongoing anti-government protests, which the paper calls a "war zone." It describes empty stores, closed banks, and fearful citizens, and claims that on February 20 alone, 129 charter flights left Kyiv for Russia, while flights to other destinations from the city were packed. The story's title quotes an interviewee as saying: "This kind of thing only happened in Kyiv during the Fascist occupation." The article also compares the emptiness of Kyiv's center to the deserted streets after the Chernobyl nuclear disaster.

Komsomolskaya Pravda, a tabloid that is one of Russia's best-selling daily newspapers, writes that "what is happening in Kyiv will hardly leave anyone in Russia indifferent." It also reports the view of Ukrainians living in the Russian city Tver, one of whom says even relatives in Kyiv "can't understand" what's happening there.

Early on Friday (21.02.2014), the daily newspaper Kommersant published an article titled "Time for Viktor Yanukovych to get out." The article claims that the US and EU's initial "outwardly careful approach to the Ukrainian crisis ... has been replaced with open pressure on Kyiv." Moscow, it adds, "won't be rushing to be an intermediary in the situation." The fact that Yanukovych agreed to an early election is seen as a "capitulation" by the paper, which goes on to write that the EU thinks "Viktor Yanukovych himself as well as the leaders of the Ukrainian opposition are increasingly losing control of the situation in the country." 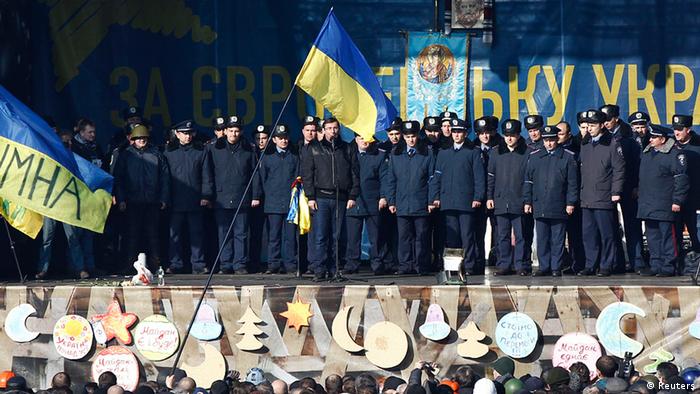 Police from Lviv joined anti-government protesters at the Maidan

The popular weekly newspaper Argumenty i Fakty seems to agree that Ukraine is spinning out of control. "From the night of February 20-21, 2014, Ukraine de facto ceased to be an independent government," the paper wrote, pointing to the fact that it was the Polish Prime Minister Donald Tusk, rather than a Ukrainian official, who had first announced that Ukraine had agreed to hold early elections in 2014.

"Argumenty i Fakty" also points out that the street fighting in Kyiv - which it says includes "neo-Nazis" - and the paralysis in the government will impact on the Ukrainian economy. According to the paper, "Ukraine's perspectives for European integration, which weren't the best to begin with, are now becoming completely illusory."

Gazeta.ru, an online news outlet considered more independent than many, ran a rather different story on Friday from the Maidan, where Kyiv's demonstrations have been taking place for three months. Along with papers including "Komsomolskaya Pravda" and Moscow broadsheet "Moskovsky Komsomolets," it reported that the chief of Lviv province's interior ministry, Vasyl Krykavskyi, had said that western Ukrainian police were on the side of the pro-EU protesters. Referring to the protesters, he told the police not "to listen to lies about extremists - it is our people who are here [on the Maidan]." The paper also reports, however, that many in the crowd thought the declarations from these men in uniform came "too late," or were a trap.

Ukraine's parliament has voted to release former prime minister Yulia Tymoshenko from prison. It is one of several motions passed in the hours since opposition leaders and President Viktor Yanukovych signed a deal. (21.02.2014)

Most Western politicians in Viktor Yanukovych’s position would have long resigned. But the Ukrainian president has no such intention. A review of the past four years explains why. (21.02.2014)

Former US National Security Advisor Zbigniew Brzezinski calls on Russia to push Ukraine’s President Viktor Yanukovych to step down and Germany to put up some money. He also tells DW how he envisages a future Ukraine. (20.02.2014)