World's oldest message in a bottle discovered in Australia, sent from Germany

More than 130 years ago a German ship threw a message overboard. It eventually buried itself on a remote Australian beach, and turned out to be part of an important worldwide experiment.

The world's oldest message in a bottle was discovered on a remote Western Australian beach, a museum announced on Tuesday.

An Australian family discovered a bottle half-buried in the sand of tiny Wedge Island, about 140 kilometers (88 miles) north of Perth. Inside was a tightly rolled piece of paper.

"[We] were walking across the dunes when I saw something sticking out of the sand so I went to take a closer look," discoverer Tonya Illman said.

"The note was damp, rolled tightly and wrapped with string. We took it home and dried it out, and when we opened it we saw it was a printed form, in German, with very faint German handwriting on it."

The bottle was handed to the Western Australian Museum for analysis, who coordinated with German and Dutch agencies to research its history.

Read more: Found footage - The camera that floated across the North Sea 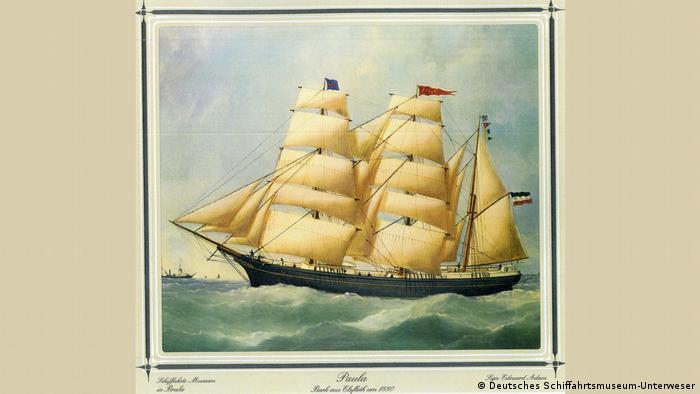 The bottle was thrown overboard from the German merchant sailing barque Paula, depicted here in 1880.

From: Bark Ship Paula, Port: Elsfleth, Captain: D [illegible], On her journey from Cardiff to Macassar.

The finder is requested to send the slip in the bottle to the German Naval Observatory in Hamburg or the nearest consulate for the return to the same agency after filling in the information on the back.” 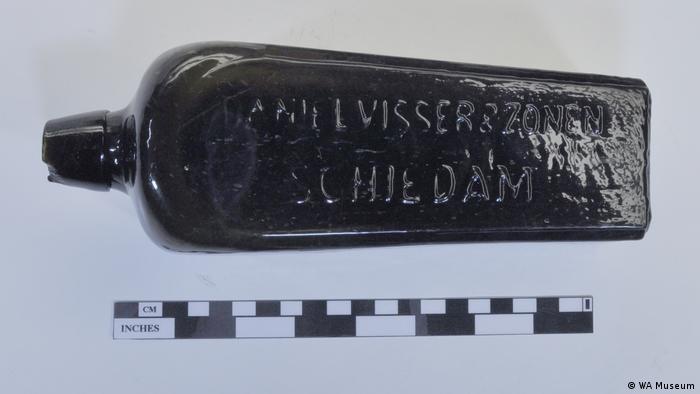 Dutch archaeologists said the bottle was a late 1880s gin bottle, ubiquitous throughout Europe and its colonies at the time

The WA Museum, along with the German Federal Maritime and Hydrographic Agency (BSH) and the National Meteorological Service of the Federal Republic of Germany (DWD), determined that the message was genuine.

"Incredibly, an archival search in Germany found Paula's original meteorological journal and there was an entry for June 12, 1886 made by the captain, recording a drift bottle having been thrown overboard. The date and the coordinates correspond exactly with those on the bottle message," Dr Ross Anderson, Assistant Curator Maritime Archaeology at the WA Museum, said in a statement.

The bottle likely washed up on the beach six to 12 months later.

Read more: Tackling plastic waste in oceans with 'wooden message in a bottle' 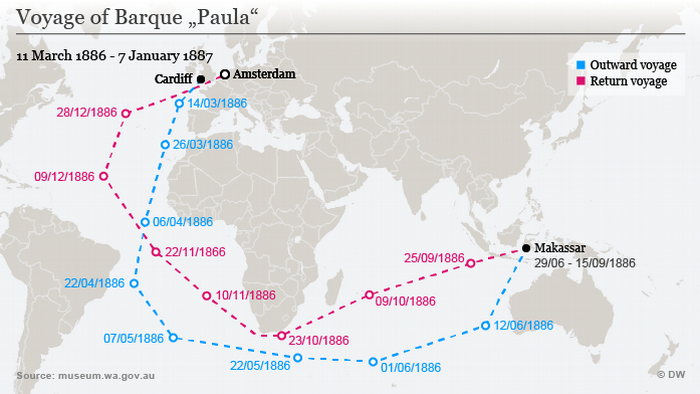 The experiments were conducted by German scientist Georg von Neumayer, who became the first Director of the German Naval Observatory in 1876 and was a leading figure in drift bottle research. His worldwide experiment provided valuable data on the great ocean currents.

Some 662 of the messages were returned to Hamburg (about 10 percent), but none of the actual bottles were ever returned. The last time one of the notes was found was in 1934 in Denmark.

"The appearance of the form from the bottle found is exactly the same as that of other forms from the year 1886, which were sent back in the following years to the German Seewarte and are available to us in the original. The forms have changed a lot over the years, but in the 1886 period the form is exactly what you have," the BSH told the museum.

The bottle has been loaned to the museum for two years.

The previous oldest message in a bottle had a similar history but was sent by British researchers and discovered by a German.

Message in a Bottle: The Start of a Beautiful Friendship