Construction has started in Chile on the world's largest optical telescope. From 2024, the European Extremely Large Telescope has the potential to transform our understanding of the universe. 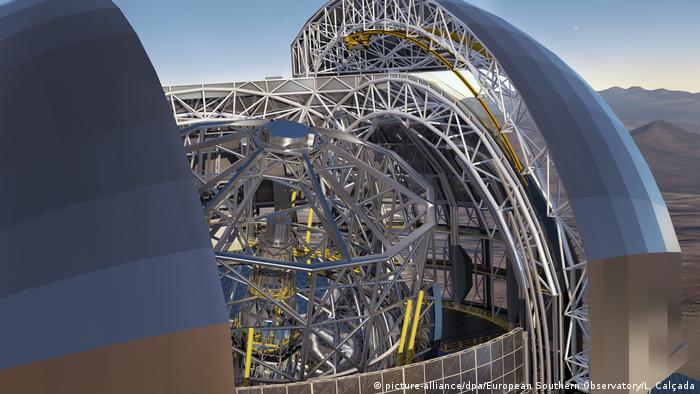 The ground-breaking ceremony for the 39-meter diameter main mirror in the telescope took place Friday on the flattened top of Cerro Armazones, a mountain rising to 3,000 meters in Chile's dry and largely cloudless northern Atacama region.

When fully constructed, the Extra Large Telescope (ELT) conceived by the European Southern Observatory (ESO), a consortium that includes Brazil, Germany, France and Britain, will also have four smaller mirrors.

The main mirror will have 800 hexagonal sections, each with a diameter of 1.4 meters, designed to fit together exactly, and is to be protected by an 80-meter dome (illustrated above).

One of ESO's goals is to search for planets beyond the Solar System where life may be viable, including the recently discovered Trappist-1 and Proxima b systems.

The largest secondary mirror, spanning 4.2 meters and weighing 3.5 tons, was forged in Mainz, Germany and is reputedly the largest-ever produced convex mirror.

ESO, which has its headquarters near Munich, oversees three other observation locations in Chile's desiccated Atacama region.

The ELT was originally envisaged in the late 1990s and is projected to cost 1.1 billion euros ($1.2 billion), mainly from European donors.

In the United States, competition continues between the Los Angeles-based Caltech university with its Thirty Meter Telescope intended for Hawaii and the Carnegie Science Center's Giant Magellan Telescope, also planned for Chile.

A tale of two camps and possibly two planets

Spectrum: The sky is the limit