One out of 10 Syrian refugees require resettlement, the UN refugee agency said ahead of a Geneva conference. But several EU member states have rejected a redistribution system amid calls for global solidarity. 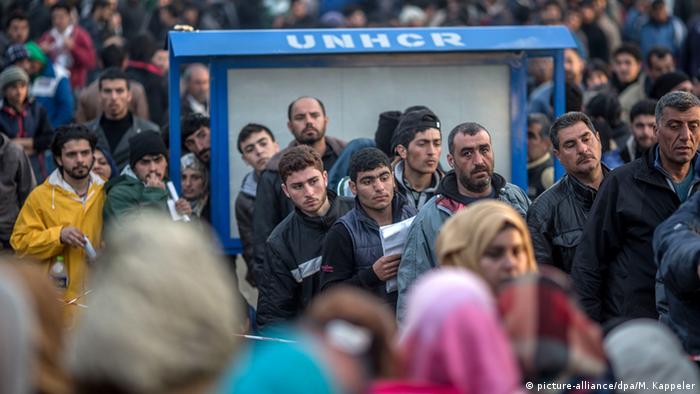 "We are here to address the biggest refugee and displacement crisis of our time," Ban told representatives from over 90 countries.

Syrians need to be given the "tools to build up their lives for themselves," the UN chief said. He called for more legal pathways to be opened to allow Syrian refugees greater access to opportunities, including labor schemes and access to education.

Wednesday's conference aims to bolster support for resettlement programs and facilitate other solutions to aid front-line countries impacted by the conflict-induced migration flow. It also seeks to involve "countries that until now have not been involved in such initiatives," according to a UNHCR statement.

"Refugees fleeing conflict and violence, and arriving in Europe, carry an important message: addressing their plight cannot only be the task of countries and communities that are close to wars. It is a global responsibility that must be widely shared until peace prevails again," said UNHCR chief Filippo Grandi in a statement.

The question of resettlement

The Office of the UN High Commissioner for Refugees (UNHCR) on Tuesday said that one out of ten Syrian refugees needed to be resettled.

Up to 10 percent of Syria's 4.8 million refugees require "resettlement and other humanitarian admission," the UN refugee agency said, adding that more than 450,000 places were required before the end of 2018.

In Europe, the question of resettlement has been a controversial issue, resulting in a political impasse on an EU redistribution system between Brussels and several member states, including Hungary, Poland, Slovakia and the Czech Republic.

According to the International Organization for Migration (IOM), more than one million migrants arrived in Europe in 2015, many fleeing conflict in Syria, Iraq, Afghanistan and elsewhere.

"Giving at least some Syrian refugees an opportunity to move on to better lives, and relieving the burden on countries hosting millions of refugees are important gestures of solidarity. Let us not miss this opportunity," Grandi said.

On March 18, Brussels and Ankara agreed on a transfer deal that would allow EU authorities to return migrants arriving in Greece by way of Turkey, a move aimed at impeding irregular migration to the bloc.

The deal was criticized by the UN and human rights groups, with UNHCR withdrawing support from temporary holding facilities.

Earlier Wednesday, Italy's interior ministry said rescue operations in the Mediterranean have risen sharply in 2016 compared to last year, with more than 16,000 migrants saved from smugglers' boats in distress.

Ankara says it wants to resettle more than a million Syrian refugees in territory once home to people from Syria's Kurdish minority. Many displaced Kurdish refugees now live in the al-Hasaka camp, with their hopes of returning home fading.

EU interior ministers have set out a 10-point plan to aid in resettling those fleeing Russia's war in Ukraine. The ministers agreed to set up a central platform to help EU governments provide necessary support.