World leaders seek coordinated response to IS terror at G20

As the G20 meeting wraps up, Western and Russian leaders have shown a deeper drive to combat terrorism together. Both sides have expressed new hope for a common solution in Syria, but old impediments may still remain. 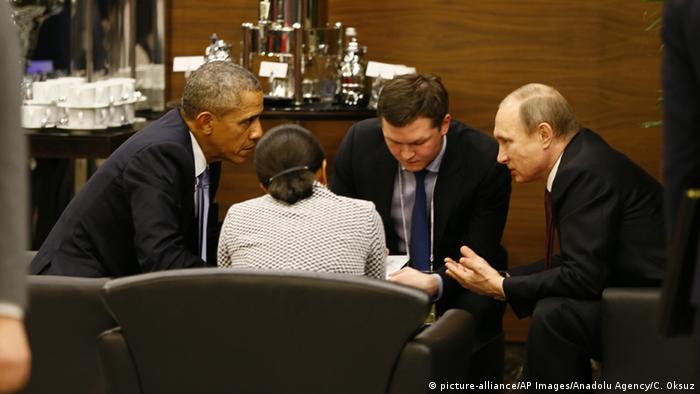 The recent string of violent acts claimed by the "Islamic State" (IS) militant group - the downed Russian plane in the Sinai, the bombing in Beirut and the coordinated attacks in Paris - have heightened the sense of urgency to combat the militant group.

The second and final day of the G20 meeting, in Antalya, Turkey has resulted in a draft statement denouncing the Paris attacks as an "unacceptable affront to all humanity" and pledging to pool intelligence on the movement of foreign fighters.

The G20 meeting is a regularly held summit between the world's largest industrial and developing nations.

In a statement made at the summit, US President Barack Obama called the Paris attacks a "terrible and sickening" setback in the fight against the Islamic State, in which he nonetheless claims there to be progress. He reiterated the call to bring an end to the civil war in Syria, although he ruled out the possibility of the US leading ground operations in the conflict.

Russian President Vladimir Putin stated at the summit that he saw the Paris attacks as further evidence that a more vigorous anti-terror coalition needs to be formed. He welcomed what he sees as a new shared recognition that joint actions will be necessary in combating IS.

Much of the discussion on Monday took place in sideline discussions between Western leaders and the Russian president.

In their discussions, the Western leaders sought to find common ground with Russia in their interventions in the Syrian civil war, which has served as a breeding ground for Islamic State extremism and a mass exodus of citizens beyond the country's borders.

"We must not let this gap between us be the altar on which this country, Syria, is slaughtered," British Prime Minister David Cameron said. He cited a willingness "to make compromises."

France stepped up its aerial assault of Islamic State-held territory in Syria on Sunday, breaking from its more hesitant stand before Friday's attacks. This comes less than two months after Russia increased its own bombing campaign in the country.

"The latest tragic events in Paris show that we have to unite our efforts in fighting this evil, something we should have done a long time ago," Putin said.

Obama in his statement said there was progress in the latest diplomatic push to bring an end to the Syrian war, evidenced by the shared urgency, but warned that there are a number of ways in which it could falter.

Russia's enhanced involvement in the Syrian conflict on the side of its ally Assad has troubled Western leaders. They have decried Moscow's targeting of rebels outside of the Islamic State, which it also labeled as terrorists.

Putin on Tuesday said France may extend support to the Syrian opposition as well in the battle against IS. He said that Moscow has "established contacts" with the opposition "which asked us to conduct airstrikes."

While foreign powers involved in the Syria's civil war have generally been able to agree on the need to combat Islamic State power in the country, disagreement still abounds over the fate of Syrian President Bashar al-Assad. Russia has insisted on his retaining power in a post-war settlement, while the US and its European allies have largely demanded his removal.

Climate change was originally to be a cornerstone of the meeting's agenda in advance of the global climate summit to be held in Paris next month. Representatives from the twenty delegations still moved ahead with talks towards a binding climate treaty.

The talks though often stalled. Sticking points included the possible inclusion of review mechanisms to evaluate nations' progress towards long-term goals, as well as the funding of emerging economy's environmental commitments by developed countries.

British security services have prevented about seven terror attacks from being carried out since June. Prime Minister David Cameron has announced a strengthening of security services. (16.11.2015)

World leaders have come together for a two day G-20 summit in Turkey starting on Sunday. The usually economic- and trade-heavy agenda is expected to center around Syria, the refugee crisis and security. (15.11.2015)