Tributes are flowing in for US Senator John McCain, who has died of brain cancer at the age of 81. World leaders have praised the war hero for his integrity, "moral courage" and "belief in democracy." 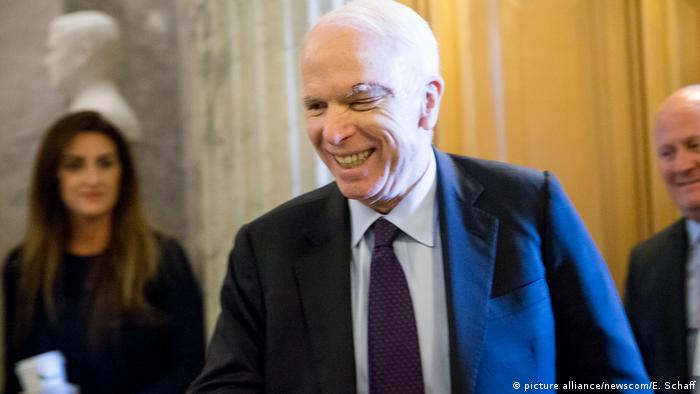 Leaders from around the world are paying their respects to the memory of Senator John McCain.

The Republican from Arizona died on Saturday after a yearlong battle with cancer.

Flags on Capitol Hill and the White House were lowered to half mast in his honor, while politicians and dignitaries from around the world offered tributes.

President Donald Trump, who had a strained relationship with McCain and once mocked his war record, sent his "deepest sympathies and respect" to the senator's family on Twitter.

"We have lost a man who steadfastly represented the best ideals of our country," said US Defense Secretary James Mattis.

"Few of us have been tested the way John once was, or required to show the kind of courage that he did," said former President Barack Obama. "But all of us can aspire to the courage to put the greater good above our own. At John's best, he showed us what that means."

German Chancellor Angela Merkel praised McCain as "one of the great political figures of our time," emphasizing that he was an "indefatigable fighter for a strong trans-Atlantic alliance." She also stressed his "courage" and "sincerity."

"Senator McCain was led by the steadfast belief that the aim of every political activity is to serve freedom, democracy and the rule of law. His death is a loss to all those who share that belief."

German Foreign Minister Heiko Maas said McCain was a man whose voice would be remembered.

"He stood for an America that is a reliable and close partner. An America, that takes responsibility for others out of strength, and stands by its values and principles even in difficult moments," he said on Twitter.

German Defense Minister Ursula von der Leyen praised his "impressively forthright, courageous and indomitable character," while Bundestag President Wolfgang Schäuble said McCain's "unshakable commitment to the values of the free world and trans-Atlantic alliance," made him "an inspiration to many across the Atlantic and party lines."

NATO Secretary General Jens Stoltenberg said McCain was an "Atlanticist," who "will be remembered both in Europe and North America for his courage and character, and as a strong supporter of NATO."

McCain: 'The only thing that Vladimir Putin understands is strength'

"I will always treasure the constant friendship he showed to the people of Israel and to me personally. His support for Israel never wavered. It sprang from his belief in democracy and freedom," he added.

Taiwanese President Tsai Ing-wen thanked the senator for endorsing bills in Congress that supported Taiwan, saying his death marked the "great loss of an important friend of Taiwan."

"He never backed down from his beliefs & forever strived [sic] for a more peaceful & prosperous world," she tweeted.

Pakistani Foreign Minister Shah Mahmood Qureshi said McCain, who made many trips to the country, had "always stood for strong Pakistan-US relations and a cooperative approach for promoting peace and building stability in the region."

Sarah Palin, who was McCain's running mate in the 2008 presidential race, said: "John never took the easy path in life and through sacrifice and suffering he inspired others to serve something greater than self."

Former Democrat President Bill Clinton and former Secretary of State Hillary Clinton said in a statement that McCain "believed that every citizen has a responsibility to make something of the freedoms given by our Constitution, and… he lived by his creed every day."

"Some lives are so vivid, it is difficult to imagine them ended. Some voices are so vibrant, it is hard to think of them stilled," former President George W. Bush said.

Bush is among the dignitaries expected to speak at McCain's funeral. The senator is set to be honored in Arizona and Washington before being buried at the US Naval Academy Cemetery in Annapolis, Maryland.

McCain has chosen to discontinue medical treatment for an aggressive brain tumor, his family announced in a statement. Support for the former presidential candidate poured in from Republicans and Democrats alike. (24.08.2018)