US Senator John McCain dead at 81: 'Greatest American hero of the last 50 years'

John McCain, a war hero and one of the most respected US legislators in recent memory, has died. He had a clear view of America's role in the world, but his most crucial vote had nothing to do with foreign policy.

'Only thing Putin understands is strength'

US Senator John McCain, a former presidential candidate and Vietnam War hero, died Saturday after losing his battle with brain cancer, his office said in a statement.

"Senator John Sidney McCain III died at 4:28 p.m. on August 25, 2018. With the senator when he passed were his wife Cindy and their family," the statement read, noting that the Republican senator had "served the United States of America faithfully for 60 years." The McCain family announced Friday that the senator had chosen to discontinue his cancer treatment.

On July 25, 2017, a week after disclosing his cancer diagnosis, McCain returned to the Senate floor, where he had been serving for 30 years. He delivered a remarkable speech — one that in many ways summed up what he believed in and stood for throughout his unique military and political career.

"What greater cause could we hope to serve than helping keep America the strong, aspiring, inspirational beacon of liberty and defender of the dignity of all human beings and their right to freedom and equal justice?" he asked in the widely praised address. If almost anyone else had posed the question, it could have come across as heavy-handed or corny; coming from the widely respected McCain, it distilled his decades of service and purpose in life.

America's unique role in the world was McCain's mantra, said James Jeffrey, the US special representative to Syria, who previously served under Presidents George W. Bush and Barack Obama as deputy national security adviser and ambassador to Turkey and Iraq. He first met McCain in 1990 at what is today called the Munich Security Conference, where McCain traditionally led the US delegation.

"Even then it was clear that he had an insight into America's role in the world and the way the world worked that is unlike any American official — including the two presidents that I worked directly for — that I have ever experienced," said Jeffrey, who called McCain the "greatest American hero of the last 50 years." 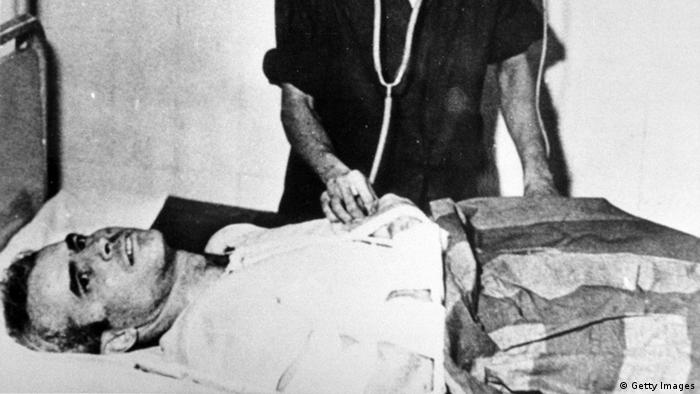 During the Vietnam War, McCain was held at the infamous Hanoi Hilton prison (he's seen here in a Hanoi hospital in 1967)

What made McCain's knowledge about the world unique was the fact that much of it predated his political career and stemmed from his upbringing and military experience. The son and grandson of four-star admirals, born on a US naval station in Panama, McCain absorbed his family's tradition of military service early on and after finishing high school entered the elite US Naval Academy. After graduating, he trained to become a Navy pilot, followed by several years of various assignments on aircraft carriers.

As the US ramped up its military campaign in Vietnam, McCain requested a combat assignment, which sent him flying bombing missions over the country. In October 1967, on his 23rd bombing mission, his plane was shot down and McCain, badly injured, was captured by the North Vietnamese. He spent the following 5 1/2 years as a prisoner of war in Vietnam, receiving no adequate medical care for the serious injuries he sustained from the crash. He was repeatedly and severely tortured, and was held in solitary confinement for two years.

After his father was made commander of all American forces in the area, the North Vietnamese offered to release McCain early, which he rejected. He was finally released in March 1973 after peace accords were signed.

His Vietnam experience not only helped shape McCain's view of America's special role in the world, it also made him a convincing advocate for the difficult argument that such a role sometimes had to be paid for in blood, said Jeffrey.

"McCain was exactly the guy who could make that argument, because few people who are still alive have paid more in blood than he had," he said.

McCain, who was decorated with the highest honors for his military service, decided to end his career in the Navy after it became clear — also due to his lasting injuries from his imprisonment in Vietnam — that it would be unlikely for him to follow in the footsteps of his father and grandfather and rise to the rank of admiral. Instead, he decided to embark on a political career. 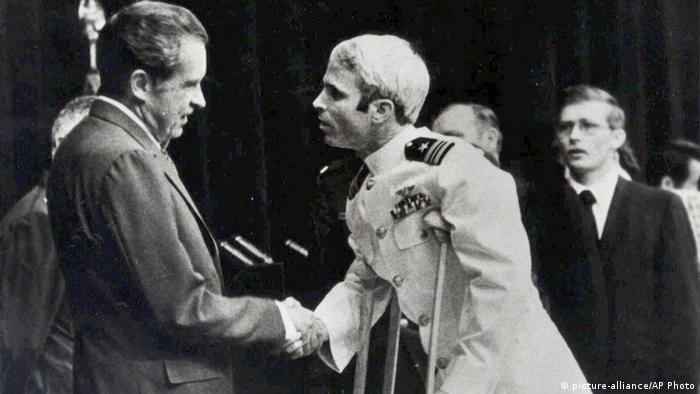 He was first elected as a Republican congressman to the US House of Representatives in 1983, but in 1987 switched to the Senate, where he continued to serve his adopted home state of Arizona until his death. During his long tenure in Congress, McCain became the leading legislator on foreign policy and military affairs of his generation.

"John McCain was one of the most talented members of Congress of the 20th and 21st centuries," said Mara Karlin, a strategic studies scholar at Johns Hopkins University who served five US secretaries of defense in various capacities.

"His leadership on a wide range of issues — from enabling a transformed US relationship with Vietnam to helping build a capable and resourced US military — was essential as the United States navigated its role first in the post-Cold War world and then in the post-September 11 world," she said.

McCain's propensity to ask difficult questions and speak his mind on matters of US foreign policy was not only aimed at Democrats, but included his own Republican Party. For instance, McCain, who had in principle supported the US-led invasion of Iraq under George W. Bush, later criticized the war effort as a "train wreck."

His attempts to become president culminated in McCain clinching the 2008 Republican nomination, only to be defeated handily in the general election by Barack Obama. McCain's selection of archconservative Alaska Governor Sarah Palin as his running mate, a decision he later said he regretted, has been criticized by some as paving the way for the tea party movement and then the rise of current President Donald Trump. 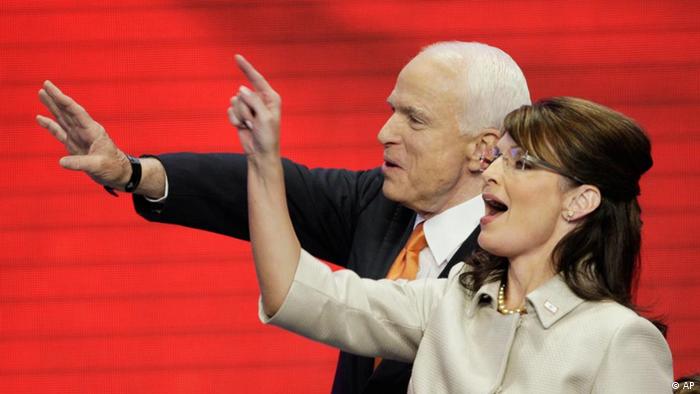 With Sarah Palin as his running mate, McCain ran for president against Obama in 2008

McCain's failed presidential campaign and his growing realization that it would be difficult to work with the nascent tea party movement that was becoming stronger inside the Republican Party foreshadowed the senator's increasing alienation from the GOP.

While it's impossible to say whether McCain would have made a good president, said Jeffrey, he had "integrity, leadership and deep knowledge. That's a good start."

McCain's repeated departures from party orthodoxy during his political career had long ago earned him the media moniker "maverick" — a term Jeffrey rejects, because it implies someone taking a position simply because he or she wants to be contrarian. That, Jeffrey explained, was never McCain's intention. A better word to describe McCain, he suggested, would be "patriot," because McCain always tried to act in accordance with his own ideals and conscience.

But while McCain, who was always a strong supporter of NATO and the trans-Atlantic relationship, was widely seen as a "hawk" on key foreign policy issues such as Russia's resurgence under Vladimir Putin and Moscow's illegal annexation of Crimea in 2014, he was also ready to make peace.

"While John McCain's accomplishments are too long to list, his critical role in enabling the US government to move beyond the visceral memory of the Vietnam War and reshape its relationship with that country may be his most critical achievement," said Karlin. "Like Nixon to China, only John McCain's engagement with Vietnam could give others the space to recognize the potential for a different relationship."

Curiously though, McCain's most important decision as a senator may have been one that had nothing to do with foreign policy and national security. It came shortly after he returned to Washington after having received his cancer diagnosis in the summer of 2017, half a year into Trump's tumultuous presidency. 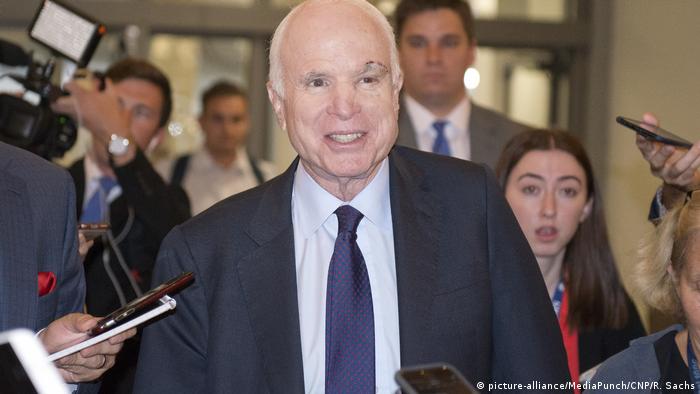 After being diagnosed with brain cancer, McCain returned to Washington for a crucial vote on Obamacare

In a nail-biter late-night session in Congress, McCain delivered the decisive vote against Trump and the Republican Party's efforts to repeal Obama's signature health care program, also known as "Obamacare." It dealt a serious blow to the GOP leadership and Trump, who notoriously had said in 2015 that McCain was "not a war hero" during the election campaign.

"I would say he will be remembered for his vote that stopped Trump's effort to trash Obamacare and throw over 20 million people off of government health care as much as anything he has done internationally," said Jeffrey.

McCain's health care vote in a way also marked the climax of the contentious personal relationship between Trump and the senator. In a 2015 campaign speech, Trump attacked McCain's military service and taunted his experience as a prisoner of war-turned-hero, saying, "I like people who weren't captured."

McCain reacted to this and repeated other personal attacks by Trump as could be expected from him: by refraining to hit back with ad hominem attacks himself and instead trying to take the high road.

His reluctance to defend himself against the disparaging remarks lobbed repeatedly at him by the president did not mean, however, that McCain was hesitant to confront Trump directly in the political arena.

To the contrary: his last years in office could be characterized as a battle against the nationalist and isolationist sentiment symbolized by Trump's "America First" policy. And McCain strongly criticized Trump's handling of key international issues, including the North Korean nuclear crisis and what was widely viewed as Trump cozying up to the Russian president at the recent summit in Helsinki. McCain slammed Trump's overtures to Putin as "one of the most disgraceful performances by an American president in recent memory."

But some of his strongest and perhaps most lasting remarks focused on the defense of democracy and America's traditional role as the leader of the West, both of which he regarded as being threatened by Trump.

In a speech at the US Naval Academy last year, McCain, without naming Trump directly, delivered a blistering indictment of the president and his winner-take-all political style.

"We are asleep to the necessity of our leadership, and to the opportunities and real dangers of this world. We are asleep in our echo chambers, where our views are always affirmed and information that contradicts them is always fake. We are asleep in our polarized politics, which exaggerates our differences, looks for scapegoats instead of answers and insists we get all our way all the time from a system of government based on compromise, principled cooperation and restraint," he said.

Instead, McCain repeatedly demanded that political leaders strive for what is in the best interest of the citizens they represent, even if it hurts them politically. The best example of McCain putting his conviction into practice was arguably his vote against his own party's efforts to repeal Obamacare.

In a statement explaining his stunning vote, the senator slammed his party for simply trying to undo Obamacare without offering anything better to replace it. It again echoed and characterized McCain's ethos of service to the American people: "We must do the hard work our citizens expect of us and deserve."

Senator John McCain, who was tortured as a prisoner of war in North Vietnam, has urged lawmakers to reject Gina Haspel. Haspel told lawmakers she would not allow the CIA to undertake activity she found "immoral." (10.05.2018)

The US senator has said he will oppose the latest Republican attempt to replace Barack Obama's health care law. Another 'nay' from the Arizona senator could be the fatal blow, given the party's small Senate majority. (23.09.2017)