The head of the United Nations says the world needed to pull together as one to more effectively fight the coronavirus pandemic. 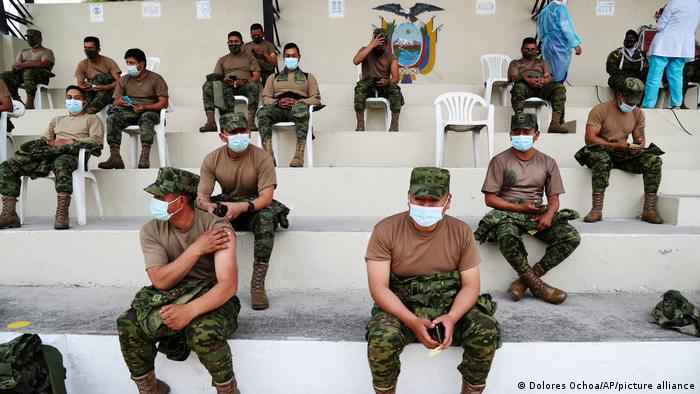 United Nations Secretary-General Antonio Guterres on Monday called for the application of wartime logic in the international battle against COVID-19.

At the opening of the World Health Organization's main annual assembly of member states, Guterres lamented a "tsunami of suffering" sparked by the coronavirus crisis.

"We are at war with a virus," he said. "We need the logic and urgency of a war economy, to boost the capacity of our weapons."

The UN chief pointed out that more than 3.4 million people had died and some 500 million jobs had disappeared since the virus first surfaced in 2019.

"The most vulnerable are suffering most, and I fear this is far from over," Guterres said, stressing the dangers of "a two-speed global response."

"Sadly, unless we act now, we face a situation in which rich countries vaccinate the majority of their people and open their economies, while the virus continues to cause deep suffering by circling and mutating in the poorest countries," he said.

"Further spikes and surges could claim hundreds of thousands of lives, and slow the global economic recovery," he said. Guterres insisted that "Covid-19 cannot be beaten one country at a time."

The assembly began with statements from various world leaders, health ministers and other high-ranking officials, and will continue until June 1. It is set to focus heavily on efforts to deal with the coronavirus pandemic.

A potential revamp of the entire approach in dealing with future global health emergencies will also be under consideration as part of this week's talks.

In his opening address, WHO director-general Tedros Adhanom Ghebreyesus said the spread of COVID-19 is being perpetuated by a "scandalous inequity" in vaccine distribution.

Tedros urged countries to donate vaccine doses to the WHO's vaccine sharing program COVAX, which is looking to inoculate 10% of the population of every country by September 2021, and 30% by the end of the year.

He also called on vaccine producers to give COVAX the first right of refusal on new batches, or to commit 50% of their volumes to COVAX this year.

What did Merkel and Macron say?

German Chancellor Angela Merkel and French President Emmanuel Macron were among the first speakers to give virtual addresses.

Merkel threw her backing behind the idea of a "global health threat council" and said leaders should provide the WHO with "lasting financial and personal support."

"We have been talking about this for years, but now it is all the more important to act," she said.

While Macron said: "We have to have institutions that are up to the task, that meet our ambitions.'' The WHO must be "robust" and "flexible" in times of emergency. "And it must be completely transparent to make sure that people trust the organization."

What is the World Health Assembly?

The World Health Assembly is the decision-making body of the World Health Organization (WHO) — the United Nations' health body — and is attended by delegations from all 194 WHO member states.

The main functions of the WHA are to determine the direction the organization wishes to pursue, appoint the Director-General — which is currently Tedros, whose term ends next year — and discuss the budget.

The gathering is held annually in Geneva, Switzerland, though this year, like in 2020, it will be held virtually due to the ongoing pandemic.

The COVID-19 pandemic is set to take center stage, including discussions around vaccine hoarding.

One of the major issues on the agenda are proposals for WHO reforms, which has been pushed to its limits by the pandemic.

The main event will likely come on Tuesday when officials discuss an assessment of the global pandemic response — and how to be better prepared in the future.

"The past year has been the most testing in our organization's history," Tedros acknowledged ahead of the meeting.

German Health Minister Jens Spahn is proposing member states contribute more financial backing for the WHO. Spahn believes it is not right that "private foundations sometimes give more money than the than the big states of the world," the health minister said ahead of the conference.

There is significant pushback over WHO policies, as some nations become wary of encroachment on their sovereignty.

But it is Taiwan's continued exclusion that will cast the longest shadow over this year's proceedings.

Taiwan — which had one of the world's best pandemic responses — remains locked out of the annual gathering for the fifth year in a row, despite growing global support for its inclusion.

The main driver behind Taiwan's omission is China, which views the self-ruled democracy as its own territory and has waged an increasingly assertive campaign to keep Taipei isolated on the world stage.

Mass trauma among nurses is a global phenomenon

On the eve of the meeting, Taiwanese Foreign Minister Joseph Wu urged the WHO to "maintain a professional and neutral stance, reject China's political interference" and allow his nation's participation in its activities.

"China has continued to falsely claim that appropriate arrangements have been made for Taiwan's participation in WHO. This wholly deviates from reality," said Wu.

The WHO has also come under scrutiny itself in recent weeks. An investigation revealed that the UN health body did not react quickly or efficiently enough to the pandemic after it first emerged in Wuhan, China, at the end of 2019.

What are they expected to agree?

On Tuesday the findings of three separate independent panels that have assessed different aspects of the global pandemic response will be discussed.

The outcome of their research suggested that countries and institutions had been woefully under-prepared to deal with the crisis. Therefore, the experts have argued for a total overhaul of the global alarm system.

They have also urged reform of the WHO to boost its independence, transparency and funding.

A draft resolution to strengthen the organization is also under discussion this week. The text is expected to call for nations to submit reviews over how prepared they were for the coronavirus outbreak.

The resolution could also give the WHO additional powers to investigate serious health threats without waiting for an invitation from the member states in question, a motion backed by both Merkel and Macron. But this is where some nations have expressed concern over their own sovereignty.

The US and Canada now allow the BioNTech-Pfizer vaccine to be administered to teenagers. Germany could follow suit this summer. But how sensible are the coronavirus vaccines for those under 18?

India: Delhi COVID lockdown may ease by May 31

Authorities say that if cases continue to decline, then the capital may start opening up on May 31. Delhi's test positivity rate has fallen below 2.5% in recent weeks.