Nike and Adidas are jostling to become the world's biggest soccer brand. The tug-of-war escalated after an unexpected World Cup upset and Nike's decision not to sponsor one of the world's most popular soccer teams. 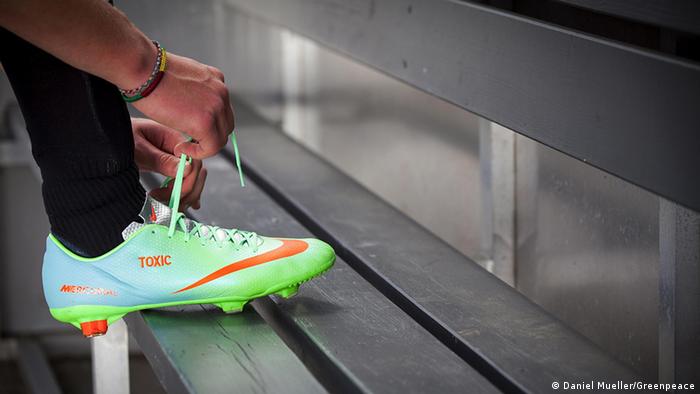 The battle for supremacy in the global soccer market reached new levels Wednesday after Nike's CEO said he expected his company's sales to keep rising fast even after the world's most-watched sporting event is over.

Nike CEO Mark Parker made the comments in an interview with a German newspaper a day after Adidas-sponsored Germany trounced Nike-wearing Brazil in the World Cup semi-finals.

"I promise you it will continue like that in the next year," Parker told the Handelsblatt daily. "The United States offers huge potential in particular, enthusiasm for football is there in any case. And in China there are tremendous growth opportunities."

Depending on who wins Wednesday's other World Cup semi-final, the big game on Sunday could have the same undertones of the fierce rivalry between the two sportswear giants Nike and Adidas as the semi-finals but with much higher stakes.

Vying for the top spot

Adidas, a World Cup sponsor since 1970, is providing apparel and cleats to finalists Germany and semi-finalists Argentina. Long the world's biggest soccer brand in terms of revenue, it is aiming for record soccer sales this year of 2 billion euros ($2.7 billion).

But Nike, which is supplying the now-eliminated hosts Brazil and other semi-finalists Holland, is nipping at Adidas' heels in terms of market share.

This year's World Cup saw more athletes wear Nike shoes than all of the other brands combined and last month Nike said its soccer-related revenue had shot up 21 percent to 1.7 billion euros in its last fiscal year that ended in May.

On Tuesday, Nike announced it was backing out of a bidding war to sponsor one of the world's most popular soccer teams, former English champions Manchester United. The company reportedly walked away from negotiations after rival Adidas made a bid to more than double the clothing and footwear contract.

British media said Nike was prepared to offer 440 million euros over 10 years to renew its contract which expires at the end of the 2014-2015 season. Media reports have suggested Adidas is close to signing a 10-year contract with the iconic British team worth 943 million euros.