When Algeria faces the US on Wednesday in the FIFA World Cup in South Africa, many Arabs will be rooting for the Americans rather than for their Arab brethren. Even soccer, it seems, can't paper over the cracks in unity. 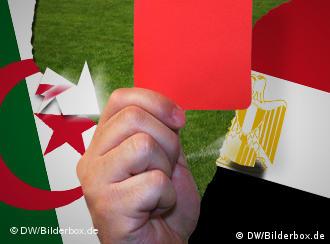 In Egypt, deep-seated anti-Americanism is likely to be drowned out for the duration of the match by memories of the scuffles, fires and broken glass that marked the Egyptian national team's qualifier for the World Cup against Algeria. The violence sparked demonstrations on three continents and a fierce political row. Egypt and Algeria recalled their ambassadors and Libyan leader Col. Moammar Ghadafi was forced to intervene to prevent the dispute from escalating.

"Damn the so-called Arab unity, we should no longer talk about it. We should review our situations. We can no longer bear such incidents," fumed Egyptian sports news caster Ibrahim Hegazi in the wake of Egypt's defeat at the feet of the Algerians.

The fallout of the Egyptian-Algerian qualifier and the mood in coffeehouses and private homes across the Middle East as millions watch the World Cup games on television is a telling barometer of the fault lines that divide the region. Unlike Africans, who cheer their national teams in South Africa but see victory not only as success for their country but for their continent as a whole, Arabs aren't rooting for the one Arab team that made it to the World Cup.

In fact, in the Middle East soccer is proving to be divisive rather than unifying. The notion of sports as a bridge builder like in South Africa where rugby eased the transition into the post-apartheid era lies beyond the Middle East's realm of the imaginable.

Brazilian, German, Spanish, Italian and Argentine flags flutter from cars in Beirut where fans express passions for their World Cup favorite normally reserved for one's own national team. In the Gulf, many have their bets on Brazil while England is often the favorite in Jordan and Israel.

That is not really surprising in a part of the world in which soccer is as much a victim of mutual distrust and conflict as are other cornerstones of political, social and economic life.

A look at Middle Eastern soccer and the walkup to South Africa tells all. The Palestinians, a national team without a country, never made it out of the starting block. Israeli travel restrictions prevented the team from fielding 11 players in what was supposed to be their first qualifying match against Singapore. 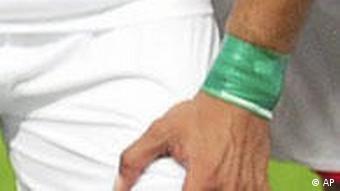 Iran's qualifying campaign was overshadowed by the country's post-election protests

Likewise, Lebanon, a country in which spectators have been barred from soccer games since the 2005 assassination of Prime Minister Rafik Hariri, never stood a chance. Lebanese Football Association Secretary General Rahif Alameh dates the "the death of football" in his country to 2001, when political-religious leaders exploited a match-fixing scandal to carve up the pie among themselves.

On the pitch, Iran's World Cup hopes were narrowly ditched by South Korea. But members of the Islamic republic's national team had more on their minds than the World Cup.

Several players took to the pitch in the first half of the game wearing green armbands in support of the Green Revolution movement that was protesting the outcome of the country's presidential election. Supporters unfurled banners in the stadium saying ‘Free Iran.'

The government and the team's coach were outraged forcing the players to leave their armbands in their lockers during the second half. Iranian newspapers reported that the armband-wearing players were fired after the game because of their insubordination.

Israel, forced to compete against European teams because virtually no Arab team is willing to meet them on the soccer field, lost to Latvia in a game that should have been an easy match. Bahrain too lucked out, ending one goal shy of the World Cup in South Africa. If Israel and Bahrain can chalk it up to bad luck, the story for Saudi Arabia says more about the region's politics.

Saudi players are finding it tough to keep up with international standards because the government and the country's soccer association discourage the kingdom's players from joining foreign clubs.

A Gulf too wide?

Embattled Iraq looked like it may be a shining example inspiring others to travel an alternative path. With the country tearing itself apart in a frenzy of sectarian violence and teetering on the verge of civil war, Iraq's national team of Shiite, Sunni and Kurdish players won the 2007 Asian Cup. Its World Cup hopes were however initially dashed by Qatar, whose long-term prospects of reaching the World Cup have since probably been thwarted by FIFA's objections to the gas-rich Gulf state's attempts to seduce Latin American players by offering them citizenship in addition to bags full of cash. 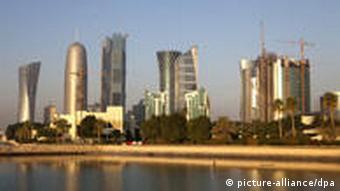 Qatar wants to bid for the 2022 World Cup

Like Iraq, war-ravaged Somalia, another Arab state, fields a multi-ethnic, multi-clan national team. But it operates under even more harrowing conditions than its Iraqi counterpart. The stadium in Mogadishu, the country's only sporting facilities, often serves as a battlefield. Players disperse of bullets and bodies prior to training. Members of the team have been killed or maimed for life, others have gone into exile.

Fans share their fate. Islamists recently stormed a home near Mogadishu where World Cup enthusiasts were watching the match between Nigeria and Argentina; two people were killed and 10 others detained, while 15 others were arrested while watching the Germany-Australia game.

There is little, if any, indication that Middle Eastern rulers will recognize the opportunities offered by sports to manage the region's fault lines any time soon. Some analysts believe, however, that Gulf ambitions to host major global sports events like Qatar's bid for the 2022 World Cup and Dubai's hopes to win the 2020 Olympics may force a change of attitude. Public pressure persuaded Dubai earlier this year to reverse a ban on allowing Israeli tennis player Shahar Peer to compete in the Dubai Tennis Championships.

Earlier, Arab media organizations lifted a ban on reporting on Israeli sports teams in international competitions. "Football has become a global trade, where all the sides forget about nationality, skin color, religion and all ethnic backgrounds," said one Saudi sports journalist. "Arabs should understand this new mentality and try to live with it."