Women's football: same on paper, different on the pitch

While female footballers are playing an identical game to their male counterparts on paper, there are differences - some more visible than others - that set the women's game apart from the men's. 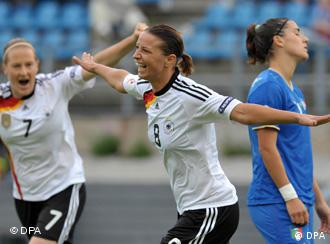 Most noticeable is the differing pace at which the games are played. Charline Hartmann, a defender for FC Cologne's women's team, says that what women lack in speed they make up for in technical ability.

"The women's game is fundamentally a bit slower," she says. "The ball is in play longer, though. With the men the game is often interrupted through fouls or aggressive play, which is not the case with the women. I think if we were as fast as the men we'd be better because we place more emphasis on technique."

While the women's game may typically be slower than the men's, it certainly isn't for lack of training. In fact, many women footballers begin their careers playing on boys teams and were often quite competitive. But at some point, says 21-year-old Cologne striker Yvonne Zielinsky, the boys start to pull away from the girls in terms of strength and speed.

"I always wanted to be faster, and for a while I could keep up," Zielinsky says. "But then there came the growth spurts, where the boys kept getting faster and eventually I couldn't keep up." 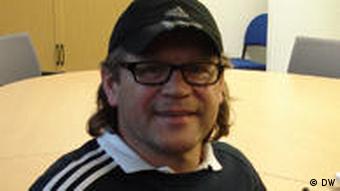 Tritschoks is a soccer academic and coach

"It's simply because women, for the most part, are 10 to 15, and possibly 20 percent behind men in terms of things like heart volume, muscle mass or blood volume," says Tritschoks, who coached his former club, FFC Frankfurt, to the league title, the German Cup and the UEFA Women's Cup in 2008. "This, of course, has an effect which can be observed in the women's game."

Tritschoks, who is now a professor of team sports and sports medicine at the German Sports Academy in Cologne, recalls that understanding the physical differences between the women's and men's games was one of the easy things to master as a coach. It's the psychological differences between men and women that are more difficult to pin down, he says.

"Coaching a women's team can't be directly compared with coaching a men's team. Women react quite sensitively to certain gestures, forms of communication and actions," he says, adding that it was always prudent to avoid a training regime based on drills and discipline.

"If you, as a coach, turn your back on a group of women players in practice, you don't need to worry that they'll be standing idle," he says. "With the men, you've got to stay on them a little more."

FC Cologne's Yvonne Zielinsky admits that for her, positive reinforcement is the best way to motivate her as a player.

"I like a coach who doesn't always harp on the negative things," she says. "Of course, you want a coach who makes suggestions on how to improve, but it's better when he tells you what you're doing right."

Markus Kühn, who coaches Zielinsky at FC Cologne, has learned some of the subtleties of coaching a women's team. While the physical aspects of his practices could be implemented on a men's team, there are some aspects of practice that he would not have implemented during his time as a youth boys' coach. 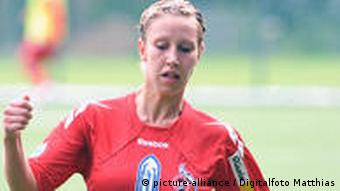 "We call it a 'chatty warm-up," Kühn says. "For the first 10 or 15 minutes of practice, the girls are given some time to catch up with each other and talk about their days before we really get down to business."

From the fans’ perspective, though, a strong work ethic isn't quite enough to draw them into the stadium. The numbers show that most soccer fans in Germany are still more interested in the speed and aggression of the men's game than the technically sound and aesthetically pleasing women's game.

Average attendances at first league Bundesliga matches often reach well over 40,000, while in the women’s national league, organizers would be happy to see 4,000 fans pass through the turnstiles.

Germany's women's soccer team will get a 60,000 euro bonus if they win the world championship this year, but it's less than a quarter of what was on offer to their male counterparts. (04.02.2011)

Germany may not have come back from South Africa with the World Cup trophy, but the country’s under-20 women’s team still has a chance to restore German pride at the U-20 World Cup, which began this week in Germany. (14.07.2010)

From migrants to world beaters

Celia Okoyino da Mbabi and Fatime Bajramaj, two daughters of immigrants, represent Gemany at the highest level of women's soccer. Their paths to the national soccer team took many twists and turns. (03.09.2009)