Wolfsburg win thriller with Bremen; Gladbach too much for Paderborn

All the action was in Bremen as Wolfsburg and Werder served up an eight-goal thriller. Lucien Favre's side responded to European heartache in midweek by picking up an easy 2-0 win over Paderborn. 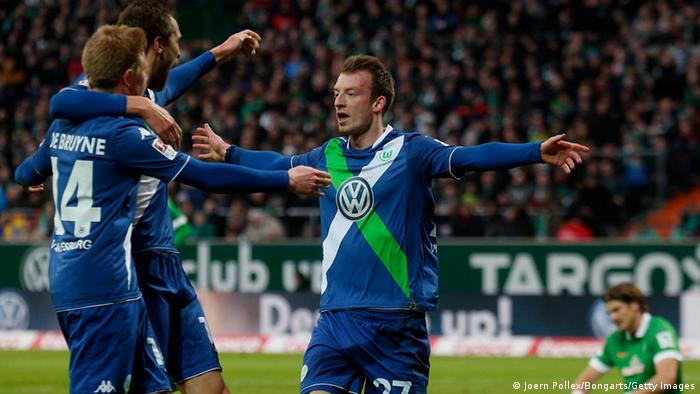 Wolfsburg staged an outstanding comeback with three goals in five second-half minutes to secure a 5-3 victory at the league's in-form side, Werder Bremen.

Dieter Hecking's men responded twice in the first 17 minutes before going 3-2 down by the half-time break. Three quick-fire goals from the Bundesliga's second-placed club stretched their unbeaten run in the Bundesliga and in the Europa League to 14 matches.

After a 0-0 draw in Lisbon on Thursday, Hecking shuffled his starting eleven to include Timm Klose, Marcel Schäfer, Daniel Caligiuri and Maxmilian Arnold. Bremen, meanwhile, added Janek Sternberg in at left-back and Levin Özuntali in attack as a replacement for Fin Bartels.

After nine minutes, Viktor Skripnik's side were ahead when Zlatko Junuzovic timed his run into the box to perfection, converting the cutback from youngster Öztunali. Only 78 seconds later the Wolves were level. Caligiuri scored into an empty net after a mistake from Raphael Wolf. 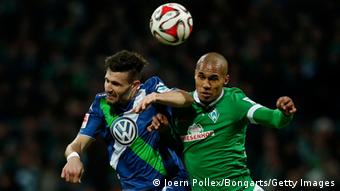 Neither Wolfsburg nor Bremen gave any quarter

Goals were packaged in pairs at the Weserstadion with Franco Di Santo cushioning the ball home from close-range in the 16th minute and Wolfsburg responding within 60 seconds - this time it was Kevin de Bruyne creating for midfielder Maxi Arnold.

On 24 minutes, Bremen went back ahead. The Wolves cleared a corner kick, but the ball fell to Felix Kroos whose shot from distance left Vieirinha in the muddle on the post and the ball creeped through the Portuguese wideman's legs.

It was the seventh time that Viktor Skripnik's men had scored before the half hour mark in their last four matches. By this point, the last two away matches for Wolfsburg had produced 14 goals in 120 minutes.

The interval marked a huge shift in fortunes for both teams with Bremen surrendering all defensive responsibilities and a reliable duo for the Wolves stepping up to the plate. Three minutes into the half, Bas Dost scored from close range with De Bruyne the architect from the right-hand side.

Belgian winger De Bruyne took his assist tally to 15 for the season on 51 minutes with a carbon-copy of Dost's first goal - the former Chelsea man beat Janek Sternberg to the ball on the wing and crossed the ball into the box for Dost to tuck home his 13th goal in eight matches for the Wolves in 2015.

Four minutes later, Wolfsburg scored their 10th goal in two away matches with Caligiuri netting his second from close range. That completed the scoring for the afternoon and meant that Wolfsburg stayed eight üpoints behind Bundesliga leaders Bayern.. 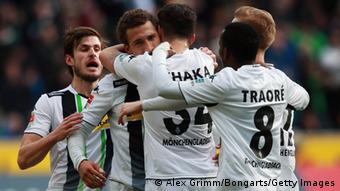 Gladbach secured their first win after European action this season

A first-half Fabian Johnson goal and a second-half one by Patrick Herrmann, both deflected, were enough to secure Gladbach a league win 72 hours after they exited the Europa League.

Coach Lucien Favre made five changes to the side after its frustrating home defeat to Sevilla. Thorgan Hazard, Herrmann and Max Kruse all started on the bench.

Most of the opening exchanges was dominated by Gladbach, but the lack of chances was reflective of their recent Bundesliga form. Johnson tried his luck early on from long range, while Raffael saw his shot blocked and cleared inside the first quarter of an hour.

Paderborn's Lukas Kruse was beaten on 17 minutes when Johnson's shot from the edge of the box took a deflection off Patrick Ziegler and wrong-footed the Paderborn keeper.

The remaining 28 minutes of the half were something of a non-event: Gladbach conjured up a handful of other chances, the most notable effort from Branimir Hrgota who forced Kruse to punch clear.

Kruse was alert to prevent Raffael from scoring a second goal from the hosts in the 46th minute before the visitors eventually moved into their best spell of the game. Alban Meha let it rip from the best part of 25 yards and forced a nice save from Yann Sommer.

Yet Paderborn's defense and Kruse could do nothing but watch Herrmann's deflected shot trickle into the net with nine minutes of the match to play. The result solidifies Gladbach's hold on third place. Paderborn are third from bottom.

Analysis: Hecking has Wolfsburg back near the top

Dieter Hecking isn't the most glamorous of coaches. As he told DW, that was the whole point of Wolfsburg hiring him. DW's Jefferson Chase reckons he has proven out to be just what the Wolves required. (01.03.2015)

Leverkusen ground out a workmanlike win at home against Freiburg and moved up into the Champions League spots. That was thanks to Dortmund administering a 3-0 beating to local rivals Schalke. (28.02.2015)