Wolfsburg made little doubt of their clash with Leverkusen, as Roger Schmidt's side passed up the chance to go top. In the Rhine derby, meanwhile, neither side came close to taking the full three points. 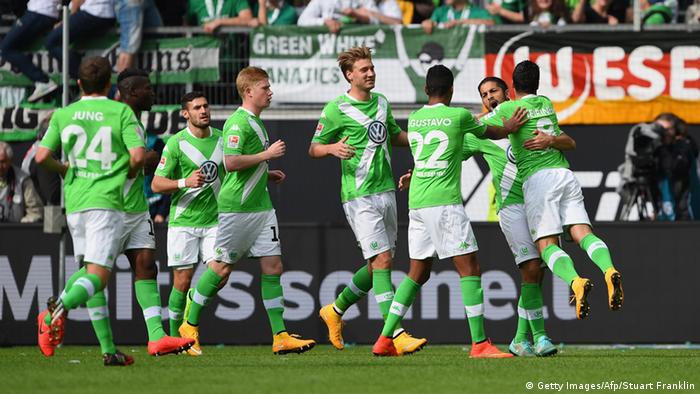 Bayer Leverkusen became the fourth side this weekend to drop points after playing in the Champions League midweek, losing 4-1 at VfL Wolfsburg. It was a long afternoon for the visitors who were forced to play 80 minutes with ten-men after Giulio Donati's red card.

Leverkusen rolled into Wolfsburg knowing that a win would take them top of the table, but coach Roger Schmidt decided to rest regulars Stefan Kiessling and Heung-Min Son.

The Wolves were the ones who started out with far more bite. Only eight minutes had elapsed when Junior Malanda powered his way past former Italian U-21 internatonal Donati, who brought him down from behind in the box and earned a straight red card. Ricardo Rodriguez made no mistake with the ensuing penalty. 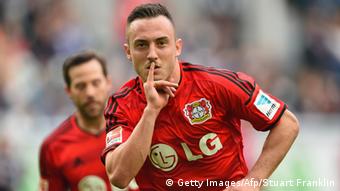 Josip Drmic opens his account for Leverkusen - but they lose 4-1.

Leverkusen leveled the scores out of nowhere in the 29th minute when a long goal kick eventually found Josip Drmic who finished sweetly. The goal spurred on Leverkusen, who played better a man down than they had done earlier when at full strength.

But they were caught out just before the break when Rodriguez received a long ball and whipped in a corner, which Vieirinha crisply headed into the back of the net.

And Rodriguez put the game away in the second half with a tremendous left-footed volley of a Kevin de Bruyne corner just after the hour mark. Schmidt introduced Kiessling, but the forward was unable to lift Leverkusen out of the hole they dug for themselves. Instead, Aaron Hunt completed the 4-1 scoreline, ten minutes from time. 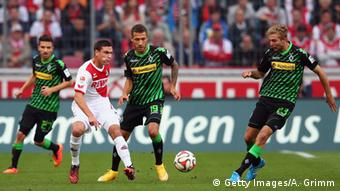 Cologne and Gladbach played out a dull draw on Sunday.

Hosts Cologne were clearly more interested in preserving their excellent defensive record this season than in taking the initiative, and the Foals were stymied by the Billy Goats' two lines of four at the back. Cologne had the best scoring chance in the 17th minute when Pawel Olkowski got behind the defense, threatening to net, but Yann Sommer came to the rescue.

Gladbach's best chance came three minutes after the break when Max Kruse headed André Hahn's cross from the right-flank inches wide. Otherwise, despite the passion in the stands, this was a match to forget that left both teams hovering just below the top six.

The Bundesliga resumes action on Tuesday with a full round of mid-week games.

Check out all of the action, as it happened, on our Live Ticker below.

In Saturday afternoon's late kick-off, Mainz beat BVB 2-0 in a game where Dortmund's composure in front of goal once again proved a problem. Shinji Okazaki and a Matthias Ginter own goal decided the game. (20.09.2014)