Wolfsburg need to take a long hard look at themselves

Wolfsburg are a warning to Bundesliga sides who try to do too much too quickly and pay the price for it. Survival was necessary, but the fact it even had to happen this way throws light on the bigger issues at the club. 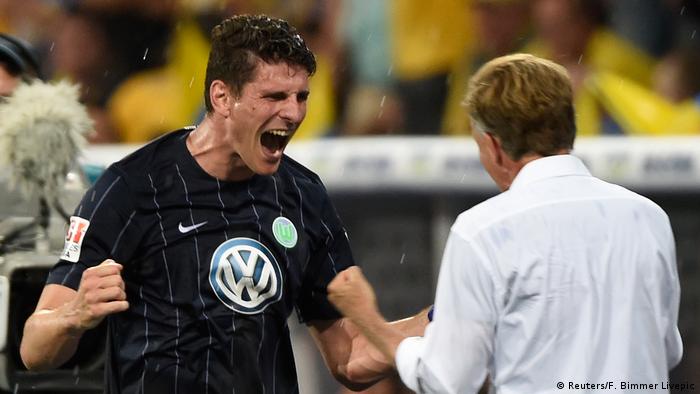 Wolfsburg will still be a Bundesliga club next season. In the same year the club celebrated 20 years in Germany's top flight, the club needed a scrappy playoff win over two legs against second-division side Eintracht Braunschweig to secure their top-flight status for another year. A short but busy summer awaits.

Eighty million euros ($89 million) spent, just 37 points gained. Eventually, Andries Jonker was the coach the club trusted to save their season but the Dutchman only just managed that.

Wolfsburg's season has been a catastrophic drop-off from a side that won the German Cup two seasons ago. The club lost 17 league games (the same as Mainz) and scored only 34 goals (10 fewer than Mainz and only two more than Ingolstadt). Having sunk to 16th place in the standings on Matchday 8, the highest they ever got after that was 12th on Matchday 17 and by the end of the following weekend, they were back down to 14th.

The Bundesliga has suffered from a widespread level of mediocrity this season, and Wolfsburg's two 1-0 wins over Braunschweig encapsulate that. The first game was won thanks to a fortunate refereeing decision as Wolfsburg flattered to deceive. In Braunschweig, Vieirinha scored a fantastic goal in a game in which Wolfsburg showed more greater quality but were still unconvincing. And that in short, has been the one-word description of their season: unconvincing.

Unlike other Bundesliga clubs Wolfsburg don't struggle with an identity issue - the community of Wolfsburg clearly cares about this team. The backing of Volkswagen makes them unpopular, but their recent decision to ban the women's team from celebrating their league and cup double win because of the men's relegation concerns is a far more damaging move.

Staying in the league keeps them relevant, but the issue now is making them competitive again. After all, consistent European football is the basic nourishment clubs like Wolfsburg live off.

"A few things will have to change at the club, those responsible know that as well. Lots of mistakes were made. We had too many players who were unhappy last season," Daniel Didavi said after the win against Braunschweig.

"I think we have players who perhaps need something new, who have been here for a while," the 27-year-old continued. "And we need players who have the will to achieve. The possibilities in Wolfsburg are enormous and we finally have to make the most of them."

Between the lines of Didavi's comments lie an ugly truth that has long troubled Wolfsburg. The disgruntled, transient player base this club has relied on in recent seasons has caused a great number of problems. That is unlikely to change this summer either.

"We all have to take a look at ourselves," Mario Gomez said after the second leg. The 31-year-old will certainly do that and wonder whether scoring goals for a side who needed to beat Braunschweig over two-legs will improve his chances of making Germany's squad for the 2018 World Cup in Russia. Ricardo Rodriguez is reported to be close to a move to Italy, while Luiz Gustavo is another who might depart.

The day after the win against Braunschweig, Wolfsburg's board were to get together to plan the next season. There will undoubtedly be transfers - the arrival of American defender John Anthony Brooks for a hefty 17 million euros was reported by the German media the morning after the club's Bundesliga status had been secured (although this has not yet been confirmed) - but the most important thing is that the club plots a course for longer term stability.