Will German companies stop cooperating with Belarus? | Europe| News and current affairs from around the continent | DW | 21.11.2020

As the EU imposes sanctions on Belarusian President Lukashenko and his entourage, German companies continue to do business with state companies in Belarus. Activists in Germany are now protesting against this. 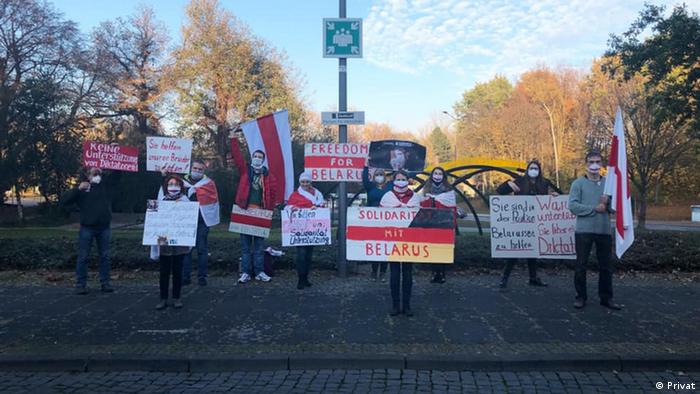 The German family-owned company Eickhoff manufactures equipment for the mining industry and supplies it to various countries, from Russia to Australia. One of its partners is the potash producer Belaruskali, one of the world's largest makers of fertilizer. This state-owned company from Soligorsk, around 120 km (75 miles) from the Belarusian capital, Minsk, has more than 16,000 employees and is an important source of income for Belarus. Eickhoff says it has been supplying Belaruskali since 1975, "regardless of the political situation in the country."

This is why people were waving the red-and-white flags in front of the company headquarters in Bochum, North Rhine-Westphalia, at the beginning of October. The activists were demanding that German deliveries to Belaruskali be frozen to express opposition to the violation of the rights of the workers striking in Soligorsk. 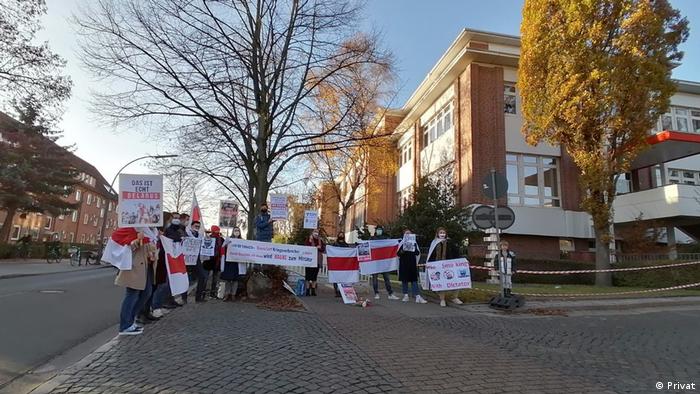 Belarusian demonstrators have protested outside the firm Hauni in Hamburg

Some workers at Belaruskali have been on strike since August 17, calling for the resignation of Lukashenko and an end to violence against peaceful demonstrators. When the strike began, management put pressure on the workers by freezing bonuses and arresting strikers. At the moment, more than 80 people are on strike, according to the spokesman of the strike committee, Gleb Sandros, who is currently abroad.

It was he who first tried to reach Belaruskali's foreign partners, including the German company Eickhoff. At the end of September, Sandros informed those business partners in writing about the repression against the strikers: "We are not asking them to break contracts but to let them rest for two or three months only, until the repressions against us stop," Sandros said.

A few days later, Belarusians living in Germany took up his initiative and also sent a letter to Eickhoff. Since they received no reply, they moved in front of the company headquarters in Bochum and handed over a letter. A little later, the managing director, Ulf Achenbach, came out to see the demonstrators. "He said he supported the democratic movement in Belarus, but that business is business, and such problems must be solved at a political level," said one of the participants in the action, Elisabeth Chigrin, manager of an IT company in Bochum.

In Eickhoff's official response to the demonstrators, which was made available to DW, the company also pointed out that a termination of the supply relationship would not have a major impact on Belaruskali, but would have a negative effect on underground security and the income of local people. Gleb Sandros considers these concerns to be nonsense. In response to an inquiry by DW, the company did not want to comment further on this. 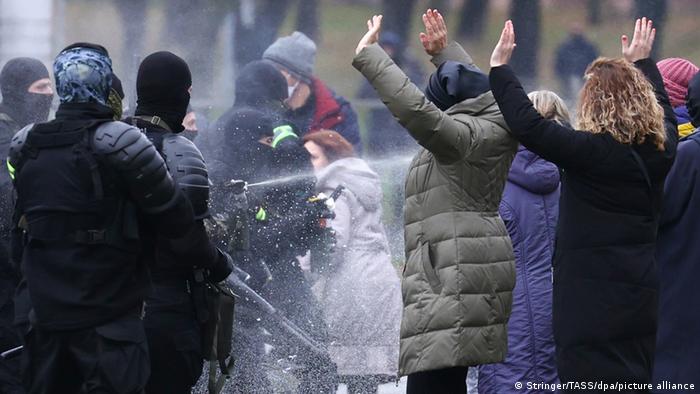 People have been protesting in the streets of Minsk since August

So far, Eickhoff is the only company that has even reacted to the letters of Belarusians living in Germany, according to Anton Malkin. Together with other compatriots, he asked more than 30 German companies, including large companies such as Bayer, Siemens, Daimler and Commerzbank, to stop cooperating with state-owned enterprises in Belarus and the Lukashenko regime, .

When asked by DW, Commerzbank said that its business in Belarus was to secure and finance German and European exports to the country. "We subject all Belarus business to a restrictive individual assessment," the bank said in a statement. Siemens offered assurances that the company was following the situation in Belarus closely, but did not want to comment on customers and existing contracts in the country, saying only that its "contractual obligations in Belarus are aimed at developing the country's infrastructure for the benefit of the Belarusian people." The Daimler automotive group, for its part, gave assurances that it would "comply with all applicable sanctions and embargoes against Belarus."

Germany is one of Belarus' four most important trading partners. According to the Belarusian statistics authority, Belstat, the total volume of imports from Germany in 2019 amounted to around €1.5 billion ($1.3 billion). German companies mainly supply technical equipment, chemical products, vehicles and plastics.

"It is with concern that we see that the political conflicts in Belarus have already led to a massive deterioration of the economic conditions," wrote Oliver Hermes, chairman of the German Eastern Business Association (OADW), in a statement. "For Belarus, it is urgently necessary to initiate a rapid political solution to the conflict to counteract a lasting loss of confidence among its own population, local companies and international investors."

When asked by DW how he assessed the ongoing cooperation of German companies with Belarusian state-owned enterprises under such conditions, Hermes merely replied that he could not comment on business decisions. Vladimir Augustinski, head of the Representative Office of German Business in Belarus, did not want to comment either.

Hoping to change Eickhoff's attitude, the Belarusian activists in Germany came to the company headquarters in Bochum twice more, but there was no reaction. Meanwhile, there are similar actions in front of other German companies.

These include the Hamburg-based Hauni Maschinenbau, a leading manufacturer of machines for the tobacco industry. The company supplies, among others, the largest Belarusian state tobacco factory, Neman, in Grodno in western Belarus, not far from the Polish and Lithuanian borders. Hauni has not reacted to activists' letters and demonstrations. The company's response to an inquiry by DW stated that Hauni constantly checks all its business partners with regard to national and international sanctions lists and strictly adheres to such sanctions. "This also applies to our business in Belarus," the company said.

At a recent solidarity rally with the demonstrators in Belarus in the western city of Cologne, Jörg Mährle, regional director of the German Trade Union Federation (DGB), called on German and European companies not to cooperate with Belarus. Some representatives of the Belarusian community in Germany are also hoping to address these demands to local trade unions and politicians, while drawing the attention of the German public to the fact that companies are, as they say, cooperating with "the bloody Lukashenko regime."

In order for this to change, German companies need a signal from above, says Elisabeth Chigrin. "If Germany declares on a political level that it will no longer supply products to Belarus because human rights are being violated there, then it will be easier for companies to stop supplying," she says, before adding that this would then not be their private decision, but a political one from above.