Why was the German comedy 'Head Full of Honey' a total flop?

"Honig im Kopf" was one of Germany's top box office hits. Til Schweiger directed a remake of his own film, but "Head Full of Honey" bombed in the US. As it's released in Germany, a film expert compares comedy traditions. 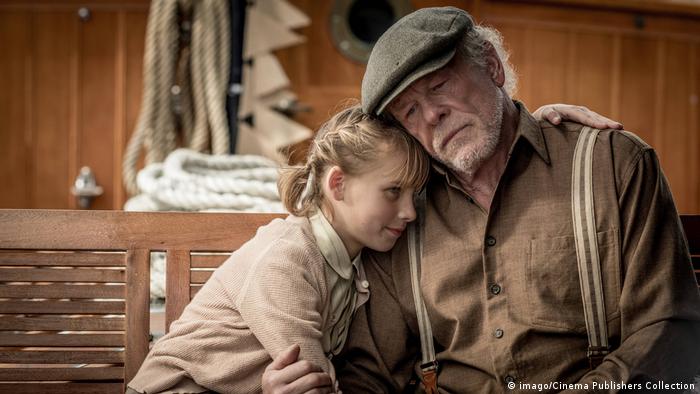 Seven million people in Germany flocked to see Til Schweiger's tragicomedy Honig im Kopf after it was released in 2014. That was reason enough for the producer and director to shoot a remake of his own movie in the US, where he once resided.

Head Full of Honey stars Nick Nolte, Matt Dillon and Emily Mortimer, as well as Nolte's own daughter, Sophie Lane Nolte, in the role of his granddaughter (top image). It made a total of $12,350 (€10,850) at the box office when it was released in English-speaking countries in November.

The New York Times review noted its "bizarre plotting and shrill performances," adding that "the film seems to have been edited in a Cuisinart." The British Observer described it as "Exaggerated, infuriating, and about as funny as a root canal without anesthesia."

The film is now set for a second theatrical run, this time in Germany, where it is released on March 21. DW discussed how such a box office bomb could happen with Christof Decker, American Studies professor specialized in Film and Cultural Studies at the Ludwig-Maximilians University in Munich.

DW: The movie Honig im Kopf was very successful in Germany; its English-language remake, Head Full of Honey, intensely criticized in the US and England. Is the understanding of humor different in Germany than in the rest of the world? 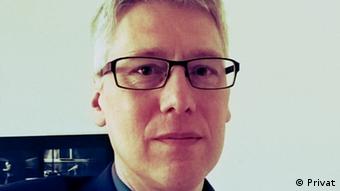 Christof Decker: Yes. At least it has a different line of tradition than in Anglo-Saxon countries. I'm currently teaching a course on comic forms. We start with the silent movie era: Charlie Chaplin, Buster Keaton, Laurel & Hardy. In these, there's a permanent dialogue with the audience that knows something the character doesn't yet know. This often results in something funny.

In the US, silent film comedy was relatively soon oriented towards a global market and was always associated with the question: Who is the audience, to whom is the production being addressed? It was always about taking the gag to the extreme, in other words, about maximum comedy.

Is this more difficult with German comedy?

The cliché about Germans is that they are too grim and have no sense of humor.

I don't believe that this idea, which in cultural studies is called essentialism and which suggests something of an innate defect, is true. People in Germany have a sense of humor. In film and television, however, what's lacking is a professional environment that drives people to be truly innovative, to go one step further and not to be satisfied with what is more or less successful.

Because you know what works and is sufficient to reach a certain audience and a certain number of viewers?

Yes, you can only achieve this advanced professionalism, of course, if you don't just appeal to the familiar audience, but take risks saying: This should interest and be understood by a much larger audience. This connectivity for a heterogeneous and diverse audience is very often missing in the German context. 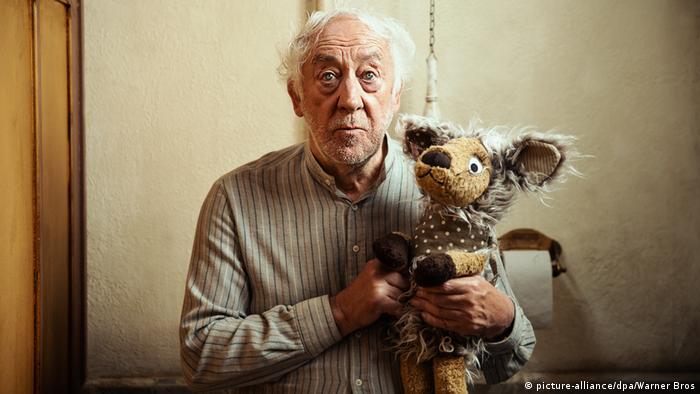 It tells the same story about a man suffering from Alzheimer's disease: The original 'Honig im Kopf' was a huge box-office hit

Why does it work the other way around; why do we watch US comedies based on pure slapstick?

For comedy to work, there needs to be not only perfect timing but also a certain lightness. Slapstick is hard work, but at its best, it looks effortless. German comedies, on the other hand, often seem cumbersome and troubled. Even in quite formulaic US formats like the romantic comedy, characters seem uninhibited about themselves.

Take for example the comedian Amy Schumer, who dismantles a classic genre. The US system has also succeeded in discovering age as a source of morbid comedy that is also amusing, as seen for example in the Netflix sitcom Grace & Frankie.

Are stereotypes the biggest problem in German comedy?

Not necessarily. Every comedy works with stereotypical characters and these are always associated with sharpness. German comedies, however, lack a certain radicalism and ruthlessness when it comes to dealing with stereotypes. Stereotypes are a central element in the aesthetics of comedy. The question is: How far can one go with this representation? And here the Anglo-American forms of comedy are often much more radical in view of their outbidding logic. They tend to transcend borders. The motto for the gag writers around Stan Laurel was: "Can you top this?" 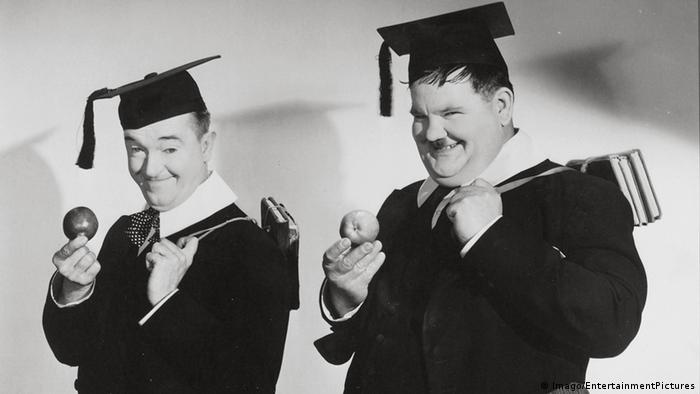 Laurel and Hardy are popular around the world

Are there historical reasons for that?

Yes, the comic is also a means of negotiating cultural conflicts. In German comedy, people are always reserved about hurting someone else. In the US, around the turn of the century, an audience developed in popular culture that could not be considered homogeneous. It always involved marginal groups as well. In a sense, in the early days of mass and popular culture, American audiences represented a global audience in small form, consisting of different religious, cultural, and ethnic backgrounds. One of Charlie Chaplin's famous short films is called The Immigrant. These groups had to be included in some way.

And what they all had in common was the experience of exclusion?

In a way, yes. In the US, there is a very different cultural driving force that emerges from a very heterogeneous and dynamic society. Jewish or African-American comedy comes from a historical position of discrimination, for example from a long history of slavery. The stereotypes must then be radical, because comedy is often the only means for minorities to defend themselves. It often refers not only to the "opponent" of the majority society, but also to its own group, which with its inferiority complexes becomes the target of comedy.

So German films are intended for an audience that is too homogeneous?

The implicit addressee is often a white, homogeneous middle-class that wants to see its lifestyle confirmed by comedy and that regulates the weird, the intellectual, the non-conformist. As a result, many areas of comedy remain untouched, not reaching a global audience. When I compare the situation with other cultural areas, I can use [Schlager] folk music as a comparison; that is a genre that only works in German-speaking countries and is not exported, because people elsewhere do not understand what might be attractive about it.

Considering this in the context of the Head Full of Honey remake, this means that instead of condescendingly claiming that this film is too demanding for US audiences, it would have to mean the other way round: We Germans are too undemanding in what we watch in our own cinemas?

For the comedy this is likely true, as expectations seem to be relatively low. I see here a real dilemma of German cinema: Comedy is by far the most successful genre that has been produced in Germany in recent years, as you can see in the Fack Ju Göhte series. At the same time, German film comedy only seems so successful if it retains its provincial character and is not cosmopolitan.

The film Welcome to the Hartmanns, one of the most financially successful comedies in recent times, illustrates a fundamental problem of German film comedy: It cannot do without the tendency to combine comedy with moral views or doctrines in order to confirm the status quo from the point of view of the majority society — especially not from the margins.

Morality as a stumbling block

Could you point out a positive example of a German comedy?

A positive counterexample — certainly not the only one — is Loriot, who was a perfectionist in orchestration and precise timing. He was also inspired by Monty Python, who cultivated nonsense and didn't want to reduce his comedy to a simple moral formula. He also had a strong penchant for physical comedy and has always appealed to his audience as intelligent. Interestingly, he was able to develop his broadcast format on television and only partially managed to do so in later films.

So the German formula of adding moral judgments is what's ruining the joke?

That is undoubtedly a fundamental problem of German comedy, which can be traced back to the early decades of the talkies and back to the UFA films  and which continued into the 1950s. It was not exportable even then, but has remained the only successful tradition within Germany.

Is this a response to history: A longing for a good mood and a healthy world after the war?

After the war, the point of departure for comedy was certainly not geared towards innovation. As points out film historian Thomas Brandlmeier, we have to go back to the 18th century to explain the rise of bourgeois society. He speaks of a special German form of comedy, where different stage traditions were sworn into a moral function at that time. For comedy, this meant the dominance of the play-on-words jokes and the expulsion of the grotesque harlequin from the stage. It was replaced by the likeable, the pleasant, the ordinary.

In the US, on the other hand, a democratic culture developed at this time, for which comedy became an equally entertaining and sharp weapon in the omnipresent struggle for recognition and rights. Both lines of tradition can still be seen today.

German film director and actor Til Schweiger has announced plans to convert a former barracks into a refugee home in central Germany. The award-winning filmmaker has persistently called for more empathy for refugees. (02.08.2015)

Charlie Chaplin: A cult figure that stood the test of time

Charlie Chaplin is one of the most iconic figures in cinematic history. The comic actor, director, screenwriter and composer captured audiences with his "tramp" persona. Even today his films continue to delight millions. (19.12.2017)