When you get a country's humor, you're a step further in understanding its culture. Some of these 10 different types of German jokes may get lost in cultural translation — but Germans actually do have a sense of humor.

According to the cliché, Germans have no sense of humor. The belief has often been spread by English-speaking observers, but perhaps the jokes were simply lost somewhere in cultural translation. Once you have to explain a gag, it obviously loses its comedic power.

The German word for joke is "Witz." The term was derived from Old High German, "wizzi," which means "to know." The term "Witz" is also close to the English word as "wit" —  one's ability to quickly perceive and express clever and amusing ideas.

Something that's funny is "witzig," but we can't guarantee these 10 classic types of German jokes are witty enough for you. Click through the gallery above to find out.

Keep in mind that these were the most translatable ones. Your next step will be to understand "Witze" directly in German...

If you want to understand more about German culture through humor, check out the series of cartoons "That's so German." 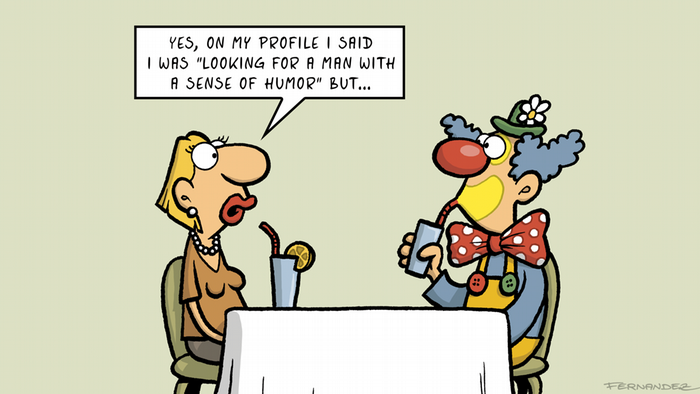 You'll also find more from Meet the Germans on YouTube or at dw.com/MeettheGermans

Sometimes facial expressions and hand gestures can communicate more than words can, but they also vary greatly from culture to culture. Here's your DW video guide to understanding and emulating typical German gestures. (01.03.2017)

Animals with funny names in German

In German, a flying dog is not a dog and a washing bear is not a bear. Meet the Germans host Kate Müser explores some of the cutest - and most curious - German animal names (with the help of some stuffed friends). (03.05.2017)

Germany is famous for its delicious cakes - but some of them have names that don't sound particularly appetizing. Meet the Germans host Kate Müser meets with a pastry chef for a tasty language lesson. (19.04.2017)

Do you "spider" or "talk around the hot porridge"? In German, you can. Meet the Germans host Kate Müser asks bilingual colleague Michael Knigge to explain some of the best German idioms. (Watch for outtakes at the end.) (22.03.2017)

Does grippe have you in its grips? Cold and flu season has arrived in the Northern Hemisphere. In Germany, we have a few unique folk remedies to combat the germs. Whether or not they work seems to be a matter of belief. (01.02.2017)

Some of them may get lost in cultural translation, but here are different types of jokes that are now classics in Germany. Are you laughing already? (10.05.2017)

Every country has its social etiquette, even if not everyone follows it all the time. If you don't want to get strange looks in Germany, try avoiding these faux pas. (18.01.2017)

How does the rest of the world see Germany? Rachel Stewart investigates the most common German stereotypes for Meet the Germans.