Sometimes facial expressions and hand gestures can communicate more than words can, but they also vary greatly from culture to culture. Here's your DW video guide to understanding and emulating typical German gestures. 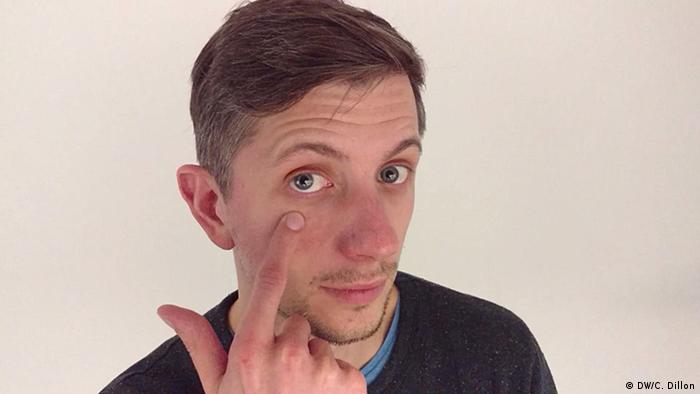 The odds are high, even if you never visit Germany, that you'll at some point meet a few German in your lifetime. Germans are the world's best travelers.

The problem is, German gestures and facial expressions do not precede them. They are not the French, whose lips flutter famously. Nor the Italians, whose exaggerated hand movements are known the world over.

So what do they do? We'll show you.

How to do it: Wave a hand in front of your face as you finish a statement in order to emphasize how asinine a particular idea or behavior is.

"They've been together for two months and they already bought a dog?" (Hand wave).

Typically, an absent third party is the reference here. But in an escalating confrontation, this hand gesture can be aimed right at the person you're talking to in order to show them that they're completely out of sync with a little old thing called reality:

"You thought you could just date other people!?" (Hand wave + scowl).

That's level two: confrontation with your conversation partner. But before you get there, practice the basics while talking about someone who isn't there.

"Seriously, she dumped him on WhatsApp?!" (Hand wave).

2. The eye-drop = 'I mean this sarcastically'

How to do it: Pull down your eyelid while you're talking to imply that everything you say after that is meant sarcastically.

Amazingly, Germans can see sarcasm. When a German pulls down on a lower eyelid, it means "Every word from here on out is the opposite of what is reasonable." It's like a safety measure to make sure the verbal sarcasm is taken for exactly what it is.

Here's the thing: Newcomers should avoid trying to do this one. Something about the timing, the angle of the tug - it's all quite elusive. In my experience as a foreigner, non-locals who try to do it and fail - and you will fail - enter the uncanny valley of the almost-but-not-quite-German and risk garnering odd looks in return.

How to do it: Purse your lips, nod thoughtfully, maybe cock your head, all while listening.

Beware of the pursed lips. In spite of all that nodding, the listener is not quite sold on what you're telling them. It's as if the idea you're trying to convey is being sloshed around inside that mouth... like a sip of  wine… not quite sure if it's good yet?… ah yes, there it is... it's terrible, and I'll tell you why.

It's not all negative when it comes to pursed lips. But it does imply a skeptical sort of listening, with judgment reserved to the end. Pursed lips, by the way, are one of the best ways to tell if a newcomer to Germany has gone native: If you start doing it yourself, you've been here too long.

4. Staring into your soul

How to do it: Lock pupils and never let go.

He's just a German, and Germans tend to stare.

It's the non-expression, the nothing-face - and it's contagious.

Even those averse to eye-contact will find themselves drawn in, as if magenetically, until a sort of social docking occurs. Thereafter, you and the German can scan each other's pupils deeply for clues to intent and meaning.

Impressively, Germans not only hold uninterrupted eye contact while listening, but often while speaking. That takes practice. English speakers who immediately try to go full German on this one risk losing their train of thought.

But it's a wonderful trait: Firstly, you know the person is listening intently (they really are); secondly, since it's very difficult to look someone in the eyes and speak coherently and come up with pleasant little white lies, the false pleasantries vanish and the conversation becomes honest and true - leading toward a final deep dive into the other's soul.

How to do it: Smile, blink your eyes in an exaggerated way right at someone, and nod your head one time.

In Germany, in group situations, it's perfectly acceptable to say "Hello" to people by blinking your eyeballs at a specific person.

To see this in real life, just be the first person seated at a German meeting. Then watch as the others come in. One by one, they'll say "hello" to those present with a scrunch of the eyeballs, a pinched-up smile and a nod. You're expected to do the same right back.

Note that this greeting is usually reserved for acquaintances and colleagues (and not as much with close friends).

6. The temple/forehead tap = 'What an idiot'

How to do it: Reference a person, tap your temple or forehead. Now they're an idiot.

Here, English speakers might twirl a finger around an ear to say "Crazy." Or we used to. Today, the twirled-finger gesture is so outdated and cartoonish that it mostly makes the person who's doing it look foolish.

But the tapped German temple is very much alive - and it's a very real insult to the person on the receiving end of it.

Example: "You know it was John's idea, right?" (taps forehead).

How to do it: Say "Boooooah," express astonishment with your eyes and physically pull away.

On the spectrum of expressions and sounds, the utterance "Booooah" is something in between.

That's because saying it involves some serious physical theatrics, with the person who makes this sound simultaneously manipulating his or her face to display astonishment - all while retreating backwards with the head and upper torso.

Like the English word "Wow," it can be used to connote anything from amazement to respect to disappointment or even disgust.

When you've mastered the movements, note that the "o" part of this expression can be drawn out for as… long… as… you… deem… necessary. That'll amplify whichever emotion you're trying to convey. For example: "Boooah" might mean I'm impressed, but "Boooooooooah" means I'm blown away! For further points, successively deepen the "o" sounds until they approximate the gravelly deep vibrations of George Clooney as he just wakes up.

That's it - you're now seven steps closer to interacting with Germans with increased understanding.

We'd love to see a clip of you mastering these expressions and gestures. Find us on Twitter at @dw_culture  under #MeettheGermans.

Is German a harsh language? Not if you're talking to your sweetheart. From "mouse-bear" to "Schnucki," Meet the Germans presenter Kate Müser discovers lots of cute and funny nicknames Germans use for their loved ones. (08.02.2017)

German learners guess the meaning of these 5 funny idioms

You go me on the cookie? In translation, some German idioms are hilarious. Meet the Germans presenter Kate Müser met up with German learners who try to guess what German idioms mean, and this is what happened. (25.01.2017)