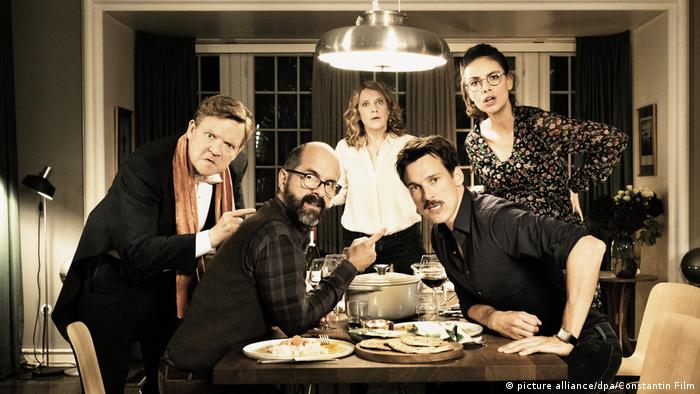 Innocent guessing games can sometimes lead to bitter revelations. That's what happens in Der Vorname (literally, The given name), the latest movie by Sönke Wortmann, the filmmaker who signed one of the most successful German films of the post-war era, the comedy The Most Desired Man (released in the US as Maybe ... Maybe Not).

Thomas and his girlfriend Anna are expecting a baby. He lets his brother-in-law, Stephan, and a friend of the family, René, try to guess how they want to call their son. At some point he reveals that it starts with an A, but once they've exhausted every option, they finally give up, only to find out that the name the couple has picked is Adolf.

The friends were all set to have a pleasant dinner together, but the revelation changes the course of the evening.

The film is based on a French play called Le Prénom that was also adapted into a hit movie in 2012 (titled What's in a Name? in its English version).

It's built on a classic storyline, one that appears for example in Edward Albee's famous play Who's Afraid of Virginia Woolf?, or in yet another movie based on a play, Roman Polanski's Carnage, starring Jodie Foster, Christoph Waltz and Kate Winslet: Too much alcohol at a dinner party leads the protagonists to unearth old rivalries and reveal their true colors.

In the film Der Vorname, the name chosen by the academic parents-to-be is an absolute provocation that serves as the starting point of the friends' dispute.

Adolf was a widespread name in German-speaking countries until it became infamous through the Nazi dictator. After Hitler took power in 1933, the name briefly spiked, but became very unpopular after 1942. From 1951 onwards, the name was barely used anymore.

Some people born before the war who were also named Adolf preferred to avoid the association. For instance, Adolf Dassler, the founder of Adidas, went by the nickname "Adi."

While baptizing your child "Adolf Hitler" is forbidden in Germany, there is no official law against using the first name only. Some rare people actually do, but most of the time it's rather used as a middle name, in reference to ancestors who were also called that way.

German registry offices also have the power to prevent parents from using the name if they feel it is chosen to promote far-right extremism.

Helge Schneider portraying Adolf Hitler in the film My Führer

Still hard to laugh about Hitler

Der Vorname finds its place among other works that have also addressed the historical legacy of the Nazi era through comedy.

The filmmakers who have done so all realize that Hitler jokes are likely to fall flat in Germany. When in the past late-night show hosts Harald Schmidt or Jan Böhmermann  dared a Hitler impersonation in their opening acts, people in the audience would only react with restrained laughter. Germans know that trivializing the Nazis' crimes is morally unacceptable.

Charlie Chaplin did it first

That was easier elsewhere. The legendary Charlie Chaplin had already signed his satire on Hitler and the Nazis in 1940 with The Great Dictator.

Meanwhile, Germans have also relaxed their approach, as different comedies about the Nazis have been released over the last decade.

Renowned theater actor Martin Wuttke achieved international recognition for his portrayal of the Führer in Quentin Tarantino's Inglorious Basterds (2009) and even popular German comedy shows, such as Switch Reloaded, have since included a Hitler parody.

The satirical novel Look Who's Back, by Timur Vermes, was a best-seller that was also adapted into a movie. In the story, Adolf Hitler wakes up in modern-day Berlin and finds new paths to popularity. In Oliver Masucci's film, a scene showing images of actual neo-Nazi demonstrations added a bitter touch to the satirical comedy — something that any artistic representation of National Socialism should aim to achieve.

How Germans see themselves

One day in Germany, 10,000 video clips: Filmmaker Sönke Wortmann has compiled a film in which Germans portray themselves. The result is a rosy ode to a country otherwise said to often overlook the bright side. (13.07.2016)

From 'Pulp Fiction' to 'The Hateful Eight'

For some experts, he's today's most influential film director; for others, just a cynic of the silver screen. Quentin Tarantino's latest feature film, "The Hateful Eight," hits theaters soon. DW looks back at his career. (23.12.2015)