'Not our fight': Why the Middle East doesn't fully support Ukraine

Middle Eastern countries are still on the fence when it comes to the Russian invasion of Ukraine. Their citizens are pointing out the West's double standards around conflict and refugees. Should Europe be worried? During a demonstration in rebel-held Syria, protesters expressed support for Ukraine

At first, they were ready to go to Ukraine to join the international legion fighting there. But in the weeks following the Russian invasion, the three young Syrian men changed their minds.

"Why would we fight somebody else's war?" one of them explained last week as the trio sat around a cafe table in central Berlin. All three friends, all in their early 30s, are refugees and have been in Germany since 2015. They had discussed going to Ukraine to fight the Russians, who had ruthlessly bombed their own city, Aleppo.

But they decided against it. "We have our own problems," another of the men argued. "[Syrian dictator] Assad is still in power, the Russians still support him — and nobody cares."

None of the men wanted to put their names to these comments because they were well aware what they were saying was controversial in Europe, where most countries are fully supportive of Ukraine.

Although not everybody feels this way and there have been demonstrations of Syrian solidarity for Ukraine, the group's attitude is far from uncommon in the Middle East, or even other parts of the world. Africa and India don't necessarily see this as their fight either.

Over the past month, commentators throughout the Middle East have been quick to point out what they see as the hypocrisy of this situation. They have talked about double standards and mentioned conflicts in Afghanistan, Iraq, Syria and Palestine, as well as the treatment of refugees arriving in Europe. 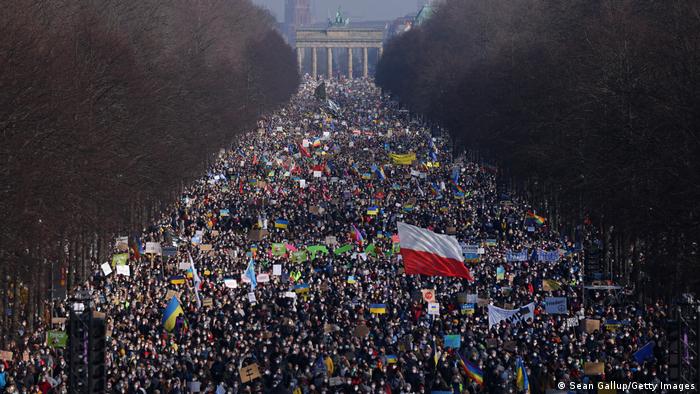 The tragedies in Syria "provoked no reactions in the West remotely comparable to the solidarity shown with Ukraine," Michael Young, a senior editor at the Carnegie Middle East Center, wrote this month on the think tank's website.

The same argument has been a popular topic for Arabic-language columnists.

"If you think that Putin is a criminal because he moved militarily against Ukraine and you do not think the same about [George] Bush Jr., [US administration officials] Dick Cheney, Donald Rumsfeld and Colin Powell, who occupied Iraq … your brain cells are malfunctioning," Ahmad al-Farraj, a well-known columnist with conservative Saudi daily, Al Jazirah, tweeted.

A writer for Hespress, a Moroccan publication, tracked the Arabic-speaking public's reactions on social media. He concluded that a lot of the angry arguments had more to do with anti-American sentiment than any genuine sympathy for Russia's invasion.

"This is the new image of the dirty competition between America, Russia and Europe," Mohammed Filali, a pharmacist's assistant in Rabat, Morocco, suggested to DW, reflecting this sort of opinion. "They are competing on the territory of Ukraine and the poor Ukrainian people alone are paying a heavy price."

Anti-American instead of pro-Ukraine

But perhaps this isn't surprising. Surveys show that locals have felt this way for years. The 2019-2020 Arab Opinion Index, a regular study which interviewed over 28,000 people in 13 Arab countries, asked respondents to assess the impact of different nations' foreign policies.

Over half — 58% — had a negative opinion of US foreign policy towards Arab countries. Only 41% felt that way about Russian foreign policy. The biannual survey indicates that these numbers have been about the same for over a decade. 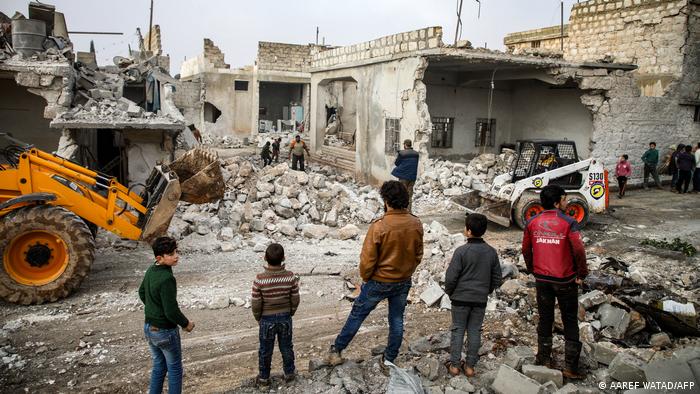 The same poll offers further clues as to why Middle Easterners are determined to remain neutral when it comes to the Ukraine war.

Asked about their main priorities, a majority of citizens said these were economic in nature. Some worried about corruption and political stability but 57% talked about unemployment, inflation and poverty as the biggest challenges they faced.

Mohammed Karim, a 39-year-old Iraqi living in Baghdad, told DW this was the main reason he was following events in Ukraine. "This war has an impact on people's livelihoods here," Karim explained. "It has caused a rise in prices and a scarcity of some goods already."

Ukraine and Russia export substantial amounts of wheat and cooking oil to the Middle East and the price of these goods has increased significantly over past weeks, leading to protests in some parts of Iraq.

Russia has been expanding business and military ties in the region and these are among other explanations offered for Arabs' attitudes toward the Ukraine war. 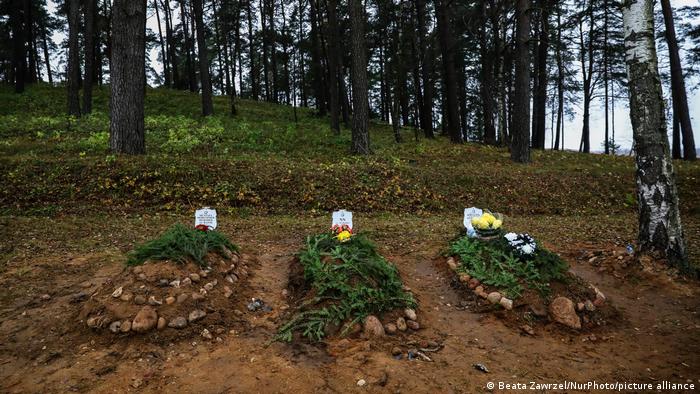 At least 19 migrants died on the Polish-Belarussian border

Other reasons suggested by local media include an apparent admiration for autocratic Russian President Vladimir Putin as a "strongman leader" as well as Russia's approach to foreign policy in the region; unlike others, Russia sets no conditions around human rights or democratic norms.

Who cares what they think?

But does any of this really matter? Voters in Middle Eastern nations with autocratic rulers cannot have a huge impact on foreign policy. But could this kind of public opinion have international repercussions in the long run?

During the recent United Nations vote on whether Russia should be expelled from the organization's Human Rights Council, only one Middle Eastern country, Libya, voted yes. Almost every other one abstained or was absent. This included the United Arab Emirates, Saudi Arabia, Jordan and Iraq, all traditionally seen as friends of the US.

"That was the right thing for Iraq to do," argued Rami al-Saleh, a 29-year-old Iraqi journalist from Baghdad. "Any war taking place this century will affect every country and Iraq needs to retain its allies in every place, whether it's to deal with economic problems or terrorists. The axes of power are shifting," he noted.

The vote was about "countries not wanting to blow their bridges to the multipolar world order," confirmed Samuel Ramani, a tutor in international relations at Oxford University in the UK, who specializes in Russian foreign policy and Middle Eastern security. "They see Russia as one of the pillars of that [world order]."

Moving away from US dominance offers Arab nations more opportunity to assert themselves. For example, Morocco has used diplomatic language so that it can remain neutral, Mohammed al-Ghawati, a professor of political science in Rabat, explained.

Morocco "affirms the unity of the Ukrainian territory but is also working to consolidate strategic relations, especially with permanent members of the Security Council," he noted.

Morocco was absent from both of the last UN votes on Russia's invasion and needs allies on the Security Council because of its territorial dispute over the Western Sahara .

Although there are factional differences inside countries — for example, Iraqi militias aligned with Iran have expressed support for Russia, an Egyptian politician very publicly parroted Russian disinformation — most people in the region don't have passionate opinions either way on the Ukraine conflict, Ramani agreed.

The two areas where public opinion around this might come to matter more, and eventually have an impact on government policy, are in food security and the recruitment of mercenaries in the region, he told DW.

Other than that, the way Middle Eastern states and their citizens are mostly dealing with the war in Ukraine is unlikely to involve any direct confrontation with Russia.

"They are basically either trying to strike a deal, or acknowledge that the world order is changing, or they want to be a voice of deconfliction," Ramani concluded. "So even if they are critical of Russian behavior, that doesn't mean they will be supportive of Ukraine."

War in Ukraine: Equal rights for all refugees?

The war in Ukraine has pushed diesel prices to record highs. In Middle Eastern countries without a functioning public power grid, diesel is desperately needed to run backup generators. But who will be able to afford it?

How could the Ukraine crisis affect the Middle East?