Why Southeast Asian students choose the UK and US over Europe | Asia | An in-depth look at news from across the continent | DW | 17.05.2021

Why Southeast Asian students choose the UK and US over Europe

Most Southeast Asian students dream of studying in a British or an American university, with Japanese higher education schools also gaining popularity in the region. European universities are lagging behind. 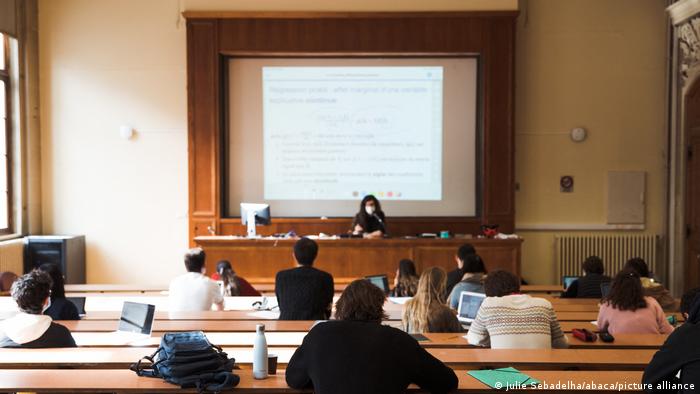 EU states remain way behind the US (29.7%) and the UK (19.9%) as preferred destinations for tertiary education

For many Asian students, studying at a university in continental Europe never really comes up for consideration.

When it comes to luring the lucrative Asian market, universities in EU member states are still scrambling to catch up with their British, American, and increasingly Japanese, counterparts.

The European Union last month extended its scholarship program for Southeast Asia until the end of 2022, providing another 300 scholarships for students from the region through the provision of a further €5 million ($6 million).

But universities in EU member states are still playing catch up to their British or American, and increasingly Japanese, counterparts in that part of the world.

According to the latest State of Southeast Asia report, released by the ISEAS–Yusof Ishak Institute each year, some 12.2% of opinion-makers from the region said in 2020 that an EU member state would be their preferred destination if offered a university scholarship. This rose to 13% in 2021.

However, EU states remain way behind the US (29.7%) and the UK (19.9%) as preferred destinations for tertiary education, while the popularity of Japanese universities is increasing faster than for the EU's, according to the report.

"Anglophone universities have the undeniable advantage of language. The use of the English language remains the main decision factor for many Asian students," Igor Driesmans, the EU ambassador to the ASEAN bloc, told DW.

Studying in Germany: From finance to fraternities

However, Driesman added that universities in the EU are gradually catching up — Not only producing more academic content in English but also teaching more classes in the world's lingua franca.

A key driver of this shift towards English-language education has been the European Higher Education Area (EHEA), a collaboration established in 2010 between higher education institutions in the EU as well as those in parts of Eurasia.

The number of English-taught bachelor's programs offered by institutions in EHEA countries rose from almost none in 2009 to nearly 3,000 by 2017, according to an EHEA study that year. For English-taught postgraduate programs, the number rose from 725 in 2001 to more than 8,000 by 2014.

The total of first residence permits issued to non-EU citizens for education purposes across the bloc rose from 235,000 in 2009 to close to 400,000 in 2019, according to Eurostat data.

Many Southeast Asian students prefer to study in English-speaking countries, but a greater number each year also want to study in Japan, despite the language barrier, said Kimkong Heng, co-founder of the Cambodian Education Forum, a newly created think tank to promote education research.

This is because some Southeast Asians have previously studied in Japan and recommend the universities to their friends, family and other students back at home, Heng said. Some even help to more formally connect their friends or students with Japanese universities.

Also, Heng added, Japan offers considerable government scholarships to students from the region every year. "One thing the EU should do is to offer more scholarships to Southeast Asian students," he commented. "Stipends for students should be increased, too, to make their scholarships more attractive."

Not that the EU isn't providing such help. The EU Support to Higher Education in the ASEAN Region program was launched in 2015 alongside the UK, an EU member at the time. In 2020, some 176 students from across Southeast Asia were awarded an Erasmus scholarship for a Joint Master's Degree, said Driesman.

In late April, the EU extended its support for higher education in the ASEAN region until the end of 2022, which provides financial assistance for intra-regional scholarships as well as scholarships to study in EU states.

But there are clear limits to what the EU can do in the higher education domain, "which remains in the hands of member states and universities that are generally autonomous," said Meng-Hsuan Chou, associate professor at Singapore's Nanyang Technological University.

Some EU states have paid attention to focusing on relations with former colonies. According to one study, there were 1,402 Indonesian nationals enrolled in Dutch universities in 2018/2019 year.

However, a European Commission study on this issue, published in mid-2019 and titled "Attracting and retaining international students in the EU," noted that the problem isn't necessarily attracting students but retaining them either for postgraduate study or work.

But one of the main problems, said Chou, of Singapore's Nanyang Technological University, is that universities in EU member states have yet to "project a clear image" of themselves to Southeast Asian students, unlike US and UK colleges.

When choosing an overseas university, she continued, Southeast Asian students look at two things: value for the money invested, and the image of the study experience — meaning what degrees are on offer, and what the living environment offers.

On the one hand, many EU universities are cheaper than their rival institutions in Britain or the US.

The starting cost per year for an undergraduate degree for non-EU students was €2,770 in France, €4,175 in Belgium and between €6,000 and €15,000 in the Netherlands, compared with around €12,000 in the UK, according to data collected by QS Quacquarelli Symonds, a global higher education analytics firm.

For some EU states, such as the Czech Republic and Slovakia, the cost of postgraduate degrees is almost the same for EU and non-EU students, though these come with certain local language requirements.

On the other hand, British and American universities are regularly ranked as better than European institutions, potentially making them better value for money for overseas students.

According to the Times Higher Education World University Rankings 2021, all but three of the top 20 universities in the world — Switzerland's ETH Zurich, Canada's University of Toronto, and China's Tsinghua University — are in the US or the UK. The next European university on the list is Germany's LMU Munich in 32nd position.

"The combination of these two images generates the staying power of US and UK universities and is contributing to the growing appeal of Japanese universities in the eyes of Southeast Asian students," Chou pointed out.