Why some young people are fleeing Belarus | Europe| News and current affairs from around the continent | DW | 24.03.2021

Why some young people are fleeing Belarus

Hundreds of students in Belarus have paid a high price for speaking out against their government, with many now in exile. One couple shares their story. 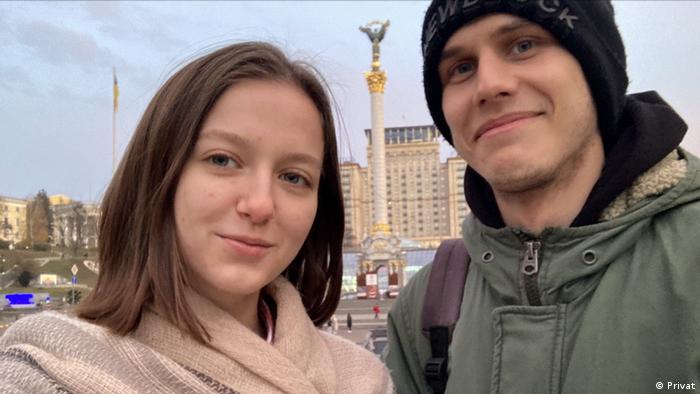 Many students in Belarus have paid a high price for their politics. They were thrown out of university, jailed, or even exiled.

"Our first thought was that we had to save ourselves and didn't know where to go or where to get help," says Anastasia Petrovich. In just 20 minutes, she and her boyfriend Maksim Zafranski packed up their belongings and boarded a bus from Minsk to Kyiv, and later spent five hours at the border as Belarusian authorities searched through their items. They found pamphlets in her boyfriend's possession, which at first seemed potentially subversive. In the end, the two were permitted to leave the country and enter neighboring Ukraine. 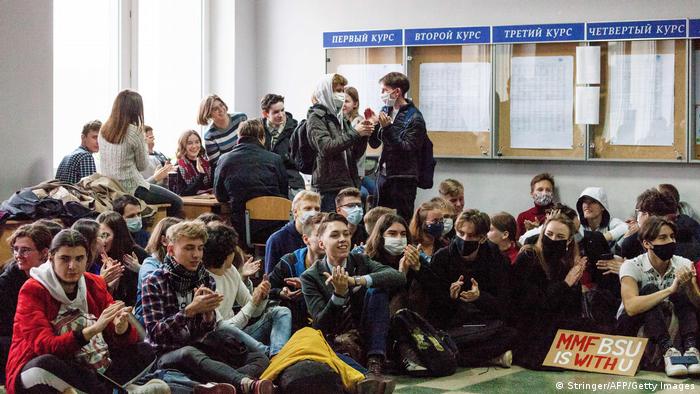 The two were students at the Belarusian State Economic University in Minsk and members of the university's student strike committee. One of the issues they had protested was the disputed result of the August 2020 presidential election, which saw authoritarian leader Alexander Lukashenko declared the winner despite the vote being widely dismissed as fraudulent. The couple decided to flee to neighboring Ukraine over fear they would be jailed in Belarus if they stayed.

After they arrived in Kyiv, they used a fast food restaurant's internet connection to contact friends in the country. "An acquaintance helped us in the beginning and later the owner of a hotel in Kyiv allowed us to stay there for free for a month," she tells DW.

Expelled and thrown into KGB interrogation

Zafranski was thrown out of school the day he fled the country — but not for bad grades. He was thrown out for protesting against the Lukashenko regime, on the steps of the university, together with local seniors, and for also not attending classes for two weeks. He says he spent 15 days in jail at the end of October and was interrogated by the police and the KGB, together with his girlfriend, over issues related to the ongoing unrest in the capital, Minsk. There was no explanation given on why the KGB was interested in the duo. But Zafranski thinks they were merely intended to intimidate the demonstrators.

Zafranski and Petrovich weren't the only Belarusians forced by KGB pressure to flee the country. Almost the entire strike committee, as well as students from other universities, are in exile abroad.  They too fear losing their freedom. Together, they're now also part of the online messaging app, Telegram Messenger, which helps them stay in contact with those still in Minsk.

According to the "Student Initiative Group," a union of students from 15 Belarusian universities, 415 students have so far been arrested at protests since last September. Some 135 others have been expelled from university and charges have even been brought against 27 students.

The situation in Belarus worsened last October after Lukashenko said he would expel students supporting nationwide strikes. "Send them to the military or throw them out on the street," the leader demanded.

November 12 last year was a dark day for students in Belarus. The KGB searched the apartments of nine students and one instructor at a total of five different universities in the capital, Minsk. They stood accused of disturbing the peace and now face possible jail terms of up to three years. They've so far spent the last four months behind bars.

A total of 12 people now face charges, and six are said to be activists with the Association of Belarusian students. Government prosecutors say the protests were coordinated with the opposition politician and human rights activist, Svetlana Tikhanovskaya, who too is now in exile. The protesters, the authorities said, blocked hallways, yelled slogans and disrupted classes.

One student, Artem Vinokurov, has been sentenced to three years in jail. Interior Ministry officials said video captured him entering a lecture hall and calling on students to go on strike.

The arrests and criminal cases have had an effect. These days, barely any students in Belarus dare to openly voice critical opinions. The most active among them take to the streets only briefly and distribute stickers and flyers at their universities. Vigils for political prisoners now only take place as picture galleries on the internet, where students are seen holding up posters to cover their faces. Those who have been suspended from university but haven't left Belarus keep fighting for their right to resume their education. 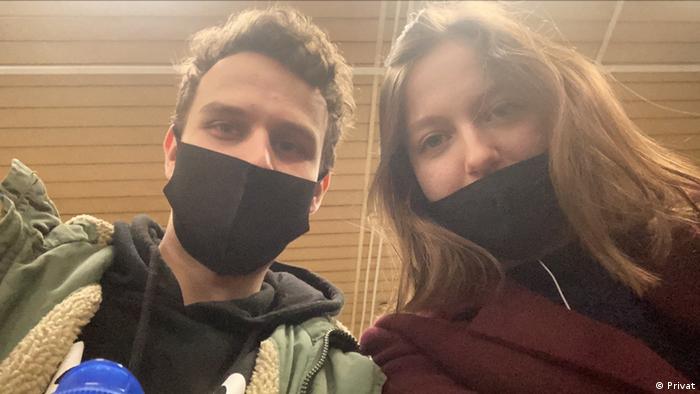 The couple now lives in Kyiv, where they want to continue their studies. But first, they are seeking part-time work. A lawyer gives them advice on how best to apply for a Ukrainian residency permit. Several foundations have said they are willing to give the duo financial support. But the young couple hopes that students in Belarus can soon demonstrate again.

"I would like a country that doesn't humiliate or beat its own people but listens to them and doesn't stifle their initiatives," Zafranski says. Petrovich adds: "I hope that Belarus gets away from the idea of always asking Russia for money. We should look after our economy ourselves without hoping for help from our 'big brother.'"

This article was translated from German and Russian.