Ken Saro-Wiwa was executed by a former military regime in Nigeria for fighting for the rights of the Ogoni. 20 years after his judicial murder, people in the region are still not benefitting from oil revenues. 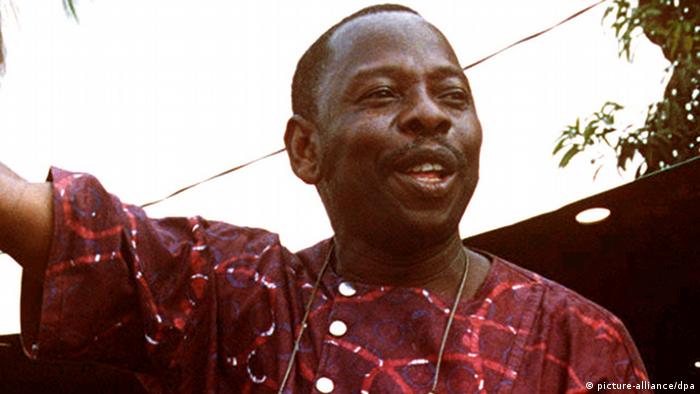 Harry Saro-Wiwa sits beside his brother’s grave. A washed-out, torn flag flutters from a wooden pole. Harry says his brother gave his life for the wellbeing of the Ogoni people and never looked after his own interests. Just as he starts opening up, some young people appear and loudly interrupt the interview.
Some are in their underwear and they smell of alcohol. Harry explains to them that he is talking about his brother, who is buried there. But the young people shrug him off: "Ken is a hero to the Ogoni – this is not just about your family, it is about all the Ogoni," they say. Though it soon becomes clear that what they really want is money, allegedly for guarding the grave. Or just because they sensed a chance to get a little bit of something. It’s hard to tell.
Defender of human rights 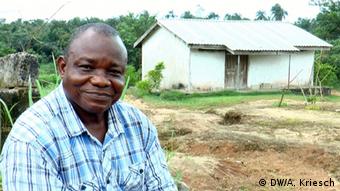 20 years after Ken Saro-Wiwa’s death, what happened at his grave shows how divided this society is. Almost everything is about money. The writer Ken Saro-Wiwa co-founded MOSOP, short for the Movement for the Survival of the Ogoni People, in the 1990s.

The group argued that oil production had devastated the region's environment, while bringing no benefit to its 500,000 people. Saro-Wiwa said that Shell had turned what was once an area of unspoilt natural beauty into a grubby black moonscape. Oil from dilapidated pipelines and pumping stations seeped into the soil and destroyed it. For local residents, Nigeria's oil reserves hadn't brought affluence, just poverty and disease.
The Ogoni took up the peaceful fight against Shell and the military regime of Nigeria. In 1993, Shell abandoned Ogoniland and has not been back since. This triumph turned Ken Saro-Wiwa and his acolytes into a real menace for General Sani Abacha’s military dictatorship. He had the writer arrested in 1994, allegedly for being responsible for the death of four Ogoni tribal leaders. Saro-Wiwa was hanged on November 10, 1995. He became a symbol for environmental protection and the human rights. 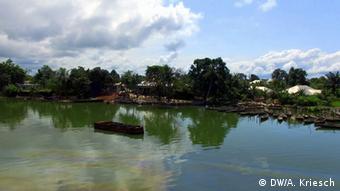 There are hardly any fish left, say local fishermen

At the activist’s grave the young people only leave after we buy them a couple of drinks. Harry asks us to excuse their behavior. He is seconded by Iddi Zobare Deboge, a sociologist at the University of Applied Sciences in nearby Bori. "The oil industry here didn’t help. It doesn’t create any jobs for young people."

The locals used to be fishers and farmers, but oil extraction ruined the environment. In 2011, the United Nations published a report putting the cost of cleaning up the area at a $1 billion (931 million euros). Removing all the damage will take 30 years. Igo Weli, spokesperson for Shell Nigeria, explained the company's stance on the clean-up. "We are working with the government to start implementing measures as soon as possible. We want to help – and be part of the solution," he added.
That is something many Ogoni doubt very much. The human rights agency Amnesty International accuses oil groups of not doing a thorough job of cleaning up the environment.
Controversial compensation
Shell has been at the of center criticism in Nigeria for decades. Analysts accuse the company and former military govenrments of willingly dividing society. A policy of divide-and-rule managed to win over some leaders to their side, while marginalizing opponents, critics say.
Shell paid out millions to improve its image and avoid trials. In 2009 it paid $15.5 million to the family of Ken Saro-Wiwa and the other eight executed activists. Shell maintained that this was a humanitarian gesture, and not a 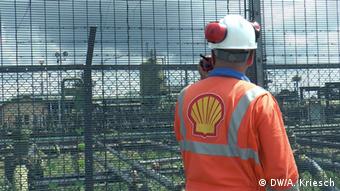 Shell is the biggest oil firm in the Niger Delta

recognition of culpability. In 2014, the people from the village of Bodo, where oil spills occured in 2004, received $84 million in compensation.

The consequences of the catastrophe can still be seen in Bodo. There are is thick carpets film on the rivers and the sand of the coast is dirty with oil. "There is hardly anything left to catch here," says fisher Sinebari Bonwa. "There used to be oysters, once, but those times are long gone."
Tentative hope for the future
Shell’s payments made a few people rich, says villager Emmanuel Adakobane. "Some are now saying they want the money intended for cleaning up the environment to be shared by the villagers. But that can’t possibly work," he adds. He hopes that after the clean-up industry will settle in the region and create some jobs. People only think of themselves, he adds: "The problem with people here is, if they are 100, they want jobs for all 100 of them. But that is not feasible."
Back at Ken Saro-Wiwa’s grave we ask his brother Harry if he feels optimistic about the future. "I pray and hope that some day we will attain everything that Ken died for." At least the next generation should benefit from the oil riches and "this place should stop being so sad." 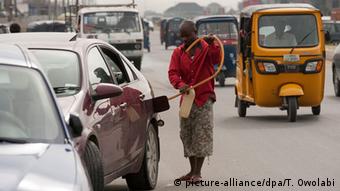 But Harry Saro-Wiwa also knows that oil prices are low, companies are not investing and the Nigerian state is lacking revenues. All along the Niger Delta, rebel groups are still stealing oil and kidnapping people for ransom. At the end of 2015, an agreement between the government and some militias – which suspended their nefarious activities in exchange for money and jobs – will expire.

Shell has not cleaned up Niger Delta, rights groups claim

A new report by rights group Amnesty International claims that the oil giant Shell has not cleaned up oil spills in the Niger Delta, despite the firm’s promises to do so. (03.11.2015)

The big players in Africa's oil industry are meeting in Cape Town to discuss the ongoing turmoil in the industry. Falling oil prices are not just causing doom but could be beneficial to the continent. (28.10.2015)

Nigeria has arrested the head of a major local oil firm only a day after the oil giant's former petroleum minister was arrested in the UK on corruption charges. The government has said it will clamp down on graft. (06.10.2015)