Worldwide 140 million women are affected by Female Genital Mutilation (FGM) - despite the fact that it is illegal in most countries, proving the true root of the problem can't be tackled with legislation alone. 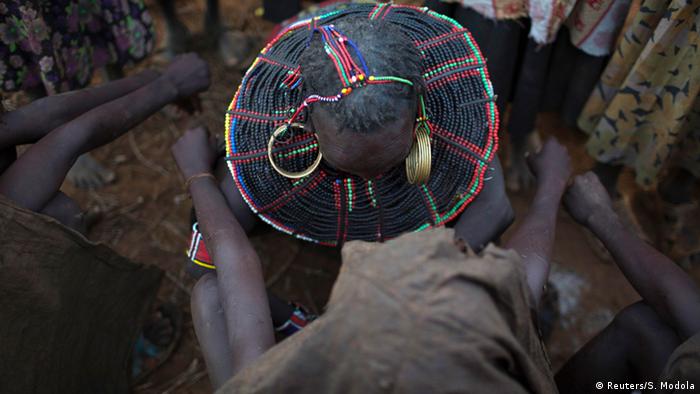 A Pokot woman performs a circumcision on a girl in a village in Kenya in October 2014. The traditional practice of circumcision within the Pokot tribe is a rite of passage that marks the transition to womanhood and is a requirement for all girls before they marry.

Somalia, the country with highest prevalence of 98 percent of Female Genital Mutilation (FGM), recently announced plans to ban the practice by law. It's a move that was celebrated by activists on social media as a powerful sign.

And true, it is one - but basically only on paper. Because in fact, in almost all of the countries where FGM is happens, it is already illegal. And despite that two million women continue to be mutilated each year. 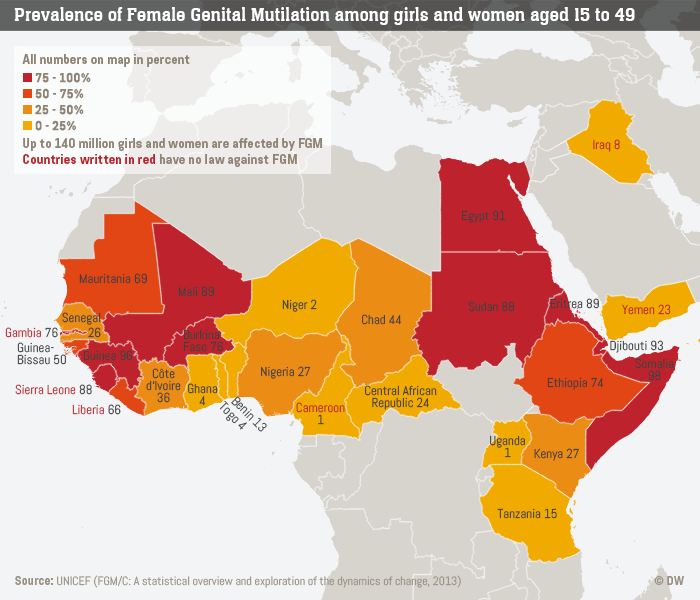 Of course, laws against such a cruel and inhumane act are better than no laws at all, something with which Mary Wandia, FGM programme manager at the campaign group Equality Now, agrees. "Somalia has the highest prevalence of FGM globally, so a strong law, which is fully implemented will be hugely important there. This will be vital to sending a strong message that the government will protect girls at risk."

However, laws alone don't have the power to #endFGM. Legislation must also be enforced to ensure that legislation is adhered to, according to Germaine Haddad, expert on FGM at the United Nations Population Fund (UNFPA) in Egypt.

"The existence of a law that is not enforced and without commitment of relevant entities makes the law useless," she says. "Also feeling that the biggest achievement is having a law and automatically FGM will disappear is a completely wrong assumption. The law is the first step that eases the work of advocators, but parallel work on the community level is as important."

But even if law enforcement reached the grassroots of the societies affected, success wouldn't be guaranteed, says Molly Melching, founder of Tostan, an NGO that works in western African countries to empower communities to implement change based on human rights.

"In communities, where 85 percent are practicing, how many people do you want to put in prison? A robber [should go to prison], yes, but someone who is following a practice that is believed to be important in their culture? We have seen over and over again that [legal punishment] has not worked."

One reason is that social norms are more powerful than laws. In its FGM evaluation report, the UN children's fund UNICEF said that many people fear social exclusion for abandoning an inherited tradition more than they fear legal punishment.

This isolation is something Melching says she has witnessed through her work visiting communities and in helping them to #endFGM: "One woman told me: 'I was not cut when I was married into this family. But when I would walk in the room, the other women would stand up and leave.' She was seen as not being pure and clean and she said she finally ended up being cut at the age of 30, because the she couldn't stand the pressure."

But it is not just in rural Africa where this unbearable social pressure is present. In other regions and even in big cities, women can also face ostracization for not having been cut.

Like in the United Kingdom, for example. Aminatu (not her real name), who is originally from Sierra Leone, but grew up in London, was mutilated as a child. She doesn't want her daughter to have to go through the same experience, but is fiercely criticized for her views.

"My father and the African community here keep attacking me for opposing FGM," she says. To travel to Sierra Leone with her daughter is unthinkable: There's always the looming possibility that some aunt, cousin or other relative might circumcise her daughter against her will.

Paradoxically, two-thirds of people in the 29 countries where FGM is particularly prevalent say the practice should be stopped - which makes it even harder to understand why it still continues. 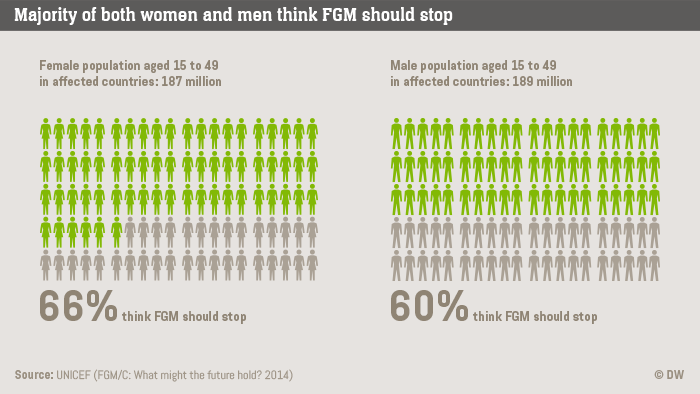 Sociologists say this could have a simple reason: a lack of communication - not only in African countries, but also for African diaspora. "They have taken a stand against the practice as individuals, and they have seen their kind and friends take a similar stand, but many of them believe there are others who still cling to old traditions," wrote Swedish sociologist Sara Johnsdotter, who interviewed Somalis living in Sweden on their attitude towards FGM, in a study.

Law enforcement but no conviction

This lack of communication also hinders enforcement of the laws put in place in countries across Europe, where cases are rarely brought before the courts and it is even rarer that there is a conviction.

Sweden the country with most migrants per capita and the first EU state to introduce anti-FGM laws in 1982, has only had two cases brought to court. In the UK, where there are 103,000 girls and women affected by FGM - the largest number in Europe - only one case has come before judges, but trial ended without a conviction.

But while in countries like Sweden, FGM is punishable regardless of whether it took place in Sweden or elsewhere, in Germany someone can only be prosecuted for carrying out the act if they do so within the country. To circumvent such legislation, some families are using a legal loophole. Camouflaged as a holiday trip, they travel to a country where it's possible to get their daughters cut and then return.

It was a similar case in the UK until the law was extended, bringing it in line with Sweden. Concrete measures have been implemented - authorities suspecting that a child is to be taken out of the country for the procedure can confiscate travel documents and prevent them from leaving. Other measures include handing out brochures to families at British airports informing them about the possibility of being prosecuted in the UK for getting their daughters cut in a different country.

And there are also other tricks for the girls themselves, if they fear being taken on such a journey. One being shared on social media site reddit is to put a metal spoon in your underwear, which sets of airport security alarms. Girls are then taken alone into a separate room to be searched and can alert authorities of their fears. This helps them avoid boarding the plane with their families.

One particular destination, which could raise alarm bells, is Egypt. The North African country is one of the countries with highest FGM prevalence: UNICEF estimates that 91 percent of women between 15 and 49 have undergone the procedure. And it is among the few countries where a majority of women - six out of 10 - think the practice should continue.

In contrast to other countries where the practice takes place, FGM is mainly performed by traditional practitioners - 72 percent of the affected Egyptian women were cut by doctors. "People tend to believe it is less harmful if done by a medical trained person. The continuous practice of FGM by doctors in Egypt is definitely very harmful, because it legitimizes the practice further in society. Medicalization is a big challenge for FGM eradication," says Haddad.

But there's hope: over the two decades support for FGM decreased by more than 20 percent.

And this is not only the case in Egypt. Several other countries have also made progress in eliminating the practice. The chance that a girl will be cut today is about one third lower than it was around three decades ago, UNICEF reports. 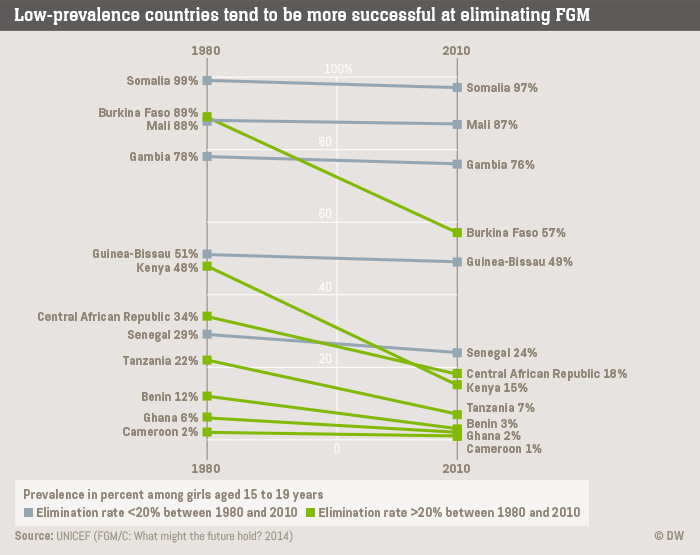 "The enactment and implementation of strong laws to end FGM is vital as we've seen in Kenya and Burkina Faso. (...) The law is not everything, but it is an essential starting point and its effective implementation sends a strong message that FGM is not acceptable and it will not be tolerated," says Wandia from Kenya-based Equality Now.

For Egypt, for example, Haddad sees opportunities for improvement to make anti-FGM-measures more effective: "[What is needed is] very serious commitment to enforce the law, through enhanced coordination between the concerned entities such as police, prosecution, forensic monitoring body...on one hand. And on the other hand, adequate awareness raising in medical schools, school curricula, religious institutions, social networks, drama and media."

So that some day, instead of cutting young girls, it will be FGM that is cut from society.