Why is the Indian government cracking down on cryptocurrency? | Asia | An in-depth look at news from across the continent | DW | 16.12.2021

Why is the Indian government cracking down on cryptocurrency?

Fearing financial instability, the Indian government is in talks over a bill that could see a ban on private cryptocurrencies while creating a framework to bring in an official digital currency by its central bank. 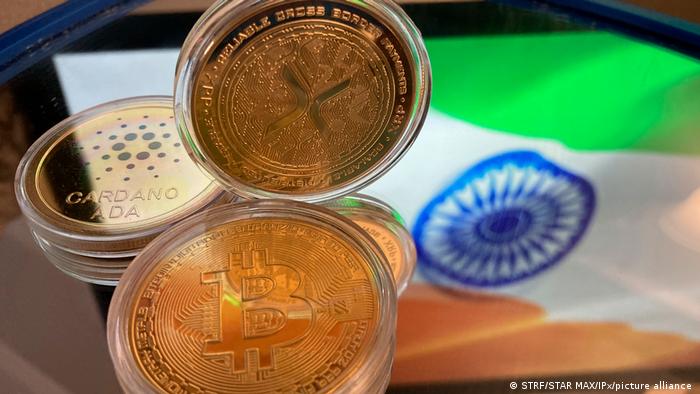 India is preparing to clamp down on its booming cryptocurrency trade with a new law likely to be introduced in parliament this month.

Details of the legislation remain unclear, but the government wants to ban all private digital currencies, with some exceptions.

India hopes that a ban would pave the way for the Reserve Bank of India — the country's central bank — to gain control over digital money, despite concerns over the lack of advanced data protection laws.

The central bank has repeatedly warned cryptocurrency could pose "serious concerns on macroeconomic and financial stability," while Prime Minister Narendra Modi in November said cryptocurrencies could "spoil our youth."

The government has also warned that unregulated crypto markets could become avenues for money laundering, fraud and terror financing.

At least eight cases of cryptocurrency-related frauds are under investigation by the Directorate of Enforcement, India's agency tasked with fighting financial crime.

But despite warnings from the government and details of the planned bill still in the shadows, many cryptocurrency investors are hoping they will still be able to trade.

"Even if there are restrictions imposed by the government, I hold multiple trading accounts in domestic, as well as foreign exchanges," Pritha Sengupta, a 25-year-old entrepreneur, told DW.

"Some of my trades have resulted in very attractive returns... almost over 500 times and bank deposits hardly give us less than 7% in a year," Pritha added.

Also unfazed by government warnings, graduate Manisha Singh insists the crypto market is a "great way to build up wealth" in India.

"The best part is that it helps us invest in small amounts. I have sold bitcoins at a profit," Singh told DW.

India has become one of the biggest markets in Asia for cryptocurrencies and one of the fastest growing in the world. The country has 15 homegrown cryptocurrency exchange platforms.

Between 15 and 20 million people in India are estimated to own cryptocurrencies, with holdings totaling approximately $6 billion (€5.31 billion), industry figures indicate.

The market for cryptocurrency and blockchain technology has surged significantly in recent years, especially during the COVID-19 pandemic lockdowns, when much of the country's population was forced to stay at home.

The local crypto market exploded when the Supreme Court overturned a previous ban last year, growing 641% between July 2020 and June 2021, according to cryptocurrency research firm Chainalysis.

Bitcoin saw an average return on investment of 66% in November and — along with cryptocurrencies Mana, Dogecoin and Ethereum — traded the most in volume during the festive season of Diwali in early November.

Film and cricket stars have also endorsed homegrown crypto exchanges by fronting advertising campaigns for platforms like CoinSwitch Kuber and CoinDCX, both of which have upped their social media campaigns.

Indians are set to invest more than $10 billion in the cryptocurrency market by 2030, according to a report by trade association Nasscom.

But when speculation around the proposed cryptocurrency legislation began last month, prices of some of the most popular digital currencies like Bitcoin, Ethereum and Tether nosedived by as much as 25% — momentarily.

Lekha Chakraborty, professor at the National Institute of Public Finance and Policy, maintains that cryptocurrency plays an important role in a globalized, post-pandemic world.

"I am not worried about the political economy of crypto, because those can be tackled through efficient monetary and fiscal coordination. However, the concern is about the regulatory framework, which needs to be strengthened, especially in the cross-border transactions," Chakraborty told DW.

"Fear of crypto is overplayed. There is no retreat of globalization in the post-pandemic world. In a globalized world, digital currency can ease the transactions," she said.

Crypto bill hangs in the balance

A proposed clause in the new law, which is still being debated, would allow for the possession of cryptocurrency as an asset and ban its use as currency or payment.

Finance Minister Nirmala Sitharaman said the new law was being reworked to take into account the rapid changes in the industry, without offering details of the changes to the original draft.

Speculation continues to abound about whether the law will prohibit cyptocurrencies or merely attempt to regulate them.

"Even keeping crypto as an asset is so speculative and volatile at this point, that it could dangerously see-saw the asset ownership landscape and impact the real economy," economist Indira Rajaraman told DW.

Why is cryptocurrency investment so popular in India?