Why Duterte won′t be prosecuted for crimes against humanity | Asia| An in-depth look at news from across the continent | DW | 23.02.2017

Philippine President Duterte has waged a brutal drug war - but do his extreme tactics also make him a criminal? The Philippines' human rights chief, Chito Gascon, tells DW why Duterte continues to act with impunity. 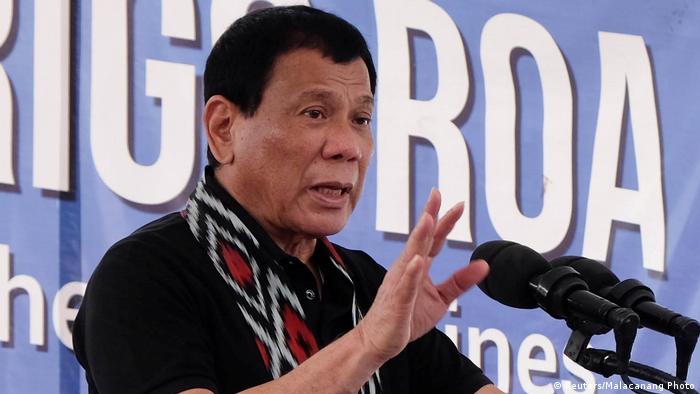 Chito Gascon has personally encountered Rodrigo Duterte only once. It was in Duterte's hometown of Davao during his term as mayor. "We bumped into each other randomly at a hotel," said Gascon. The two didn't exchange words.

Since 2015, Gascon has been the head of the Philippine Commission on Human Rights (CHR). Duterte is keeping him very busy as the organization scrutinizes the president's policies. "We are something of a thorn in the side of the government," said Gascon.

Major human rights violations have been on the daily agenda for Gascon since Duterte took office in summer 2016 and began a nationwide war on drugs. To date, more the 6,000 people have lost their lives. Most of them were petty drug dealers and users who were killed in police operations or by secret death squads. Other estimates even go as high as 7,000 victims.

Duterte as powerful as ever

President Duterte currently has the flexibility to act and govern as he pleases. He enjoys a majority in both chambers of parliament and the high court is also apparently on his side, which according to Gascon is remarkable considering that no judges on the Supreme Court were named by Duterte. "Some judges will retire during the next few years and that will be the first chance for replacement," said Gascon. 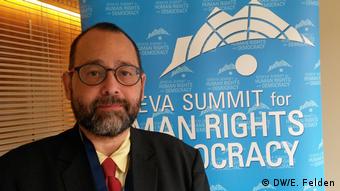 Gascon: 'We are something of a thorn in the side of the government'

Nevertheless, in 2016, the court made a controversial ruling in favor of Duterte when it permitted, at Duterte's request, the burial of former Philippine dictator Ferdinand Marcos at the Heroes Cemetery in Manila.

Another sensitive issue on Duterte's agenda that needs legal approval is the reinstatement of the death penalty for various offenses. It was abolished in 2006.

Additionally, Duterte wants to lower the age of criminal responsibility from 15 to nine.

"If congress approves this, then it is legal," said Gascon. "But there is certainly some resistance. Duterte has a majority in the House of Representatives, but there is growing opposition in the Senate."

The second chamber of parliament is currently seeking expert opinion to determine if reinstating the death penalty is legal under international law, and the Senate has suspended deliberations pending the submission of expert opinions by the Ministry of Justice. But conversely, the House of Representatives may hold a vote as early as in the next few weeks.

A case for the courts?

If you ask Chito Gascon, Duterte should also be held legally responsible after boasting that he personally killed criminals during his time as mayor of Davao.

"As reports emerged about his [Duterte's] participation in the so-called 'death squads,' the Philippine HRC initiated a four-year investigation from 2008- 2012 - before my time there," said Gascon.

The commission came to the conclusion that Duterte had the power of command in Davao at the time and therefore should be held accountable. But according to Gascon, five years have passed since then, and there have been no charges leveled.

"The commission itself cannot press charges; we can only issue recommendations," said Gascon. "The state prosecutor has to take that responsibility, but they failed to do so when Duterte was still mayor of Davao."

The next presidential election in the Philippines is planned for 2022. Gascon thinks it is unlikely that Duterte will be indicted by a national or international court before he steps down. As the sitting head of state, the constitution grants him immunity from prosecution. Gascon is therefore waiting patiently for new information to emerge.

But recently, new evidence came to light that may present an opportunity for the HRC to make a case against Duterte.

"Just this week, the chief witness of the death squads in Davao made a statement, similar to another man last summer," said Gascon. "Both admitted on the record that Duterte directly took part in criminal acts. We didn't have this evidence during our 2012 investigation."

This development could present a new opportunity to press charges against Duterte - but the accusations are very controversial and could indeed be life-threatening for both witnesses.

Philippine President Rodrigo Duterte's most outspoken political opponent could soon find herself behind bars. A Manila court issued a warrant for her arrest as part of Duterte's so-called war on drugs. (23.02.2017)

President Duterte authorized and paid for extrajudicial killings while he was a city mayor, retired policeman Arthur Lascanas has alleged. Lascanas also claims that a critical radio commentator was among those targeted. (20.02.2017)

"I honestly am very worried about retaliation against them [witnesses] and their families," said Gascon. "We need to offer effective measures for their protection in order to encourage others to speak up like they have."

International criticism of the Philippine president's brutal drug policy has not abated. But at home, Duterte is very popular. Since taking office, he has consolidated power and has grown in strength and popularity. According to Gascon, Duterte's approval ratings are over 80 percent.

"He promised change, and this is exactly what people are asking for," said Gascon. "For every person who thinks it is wrong to kill criminals without due process of law, there are countless others who are happy to have one less dealer or addict in their neighborhood or city."

Gascon also thinks that Duterte's grandiose election promises were only propaganda and that he never had a comprehensive strategy. "At the time he said that he could solve the Philippines' drug problem in three to six months," said Gascon. "He waged a similar anti-drug war as mayor of Davao for 23 years."

But even last week, drug transactions were still taking place there. "Why does Duterte think that a similar policy would be more effective nationwide?" said Gascon, adding that he is convinced it was only a tactic to lure the masses.

Human rights groups have been sounding the alarm against Duterte's authoritarian rule and this also may have a long-term effect on public opinion. "With the growing number of victims, the effects of the drug war are getting closer to home for many people," said Garcon. "More and more people are going to lose a neighbor or a relative."

Gascon doubts that he will get the chance again to speak with Duterte - but he knows exactly what he would say if given the opportunity.

"I would want to know how he defines human rights and exactly what they mean to him," said Gascon. For that matter, the Philippine justice minister declared that criminals were "not part of humanity."

"Duterte and his faithful adhere to the attitude that if someone breaks the law, then they lose all of their rights," said Gascon. "I think with this argumentation, they are justifying for themselves the developments taking place right now in my country."