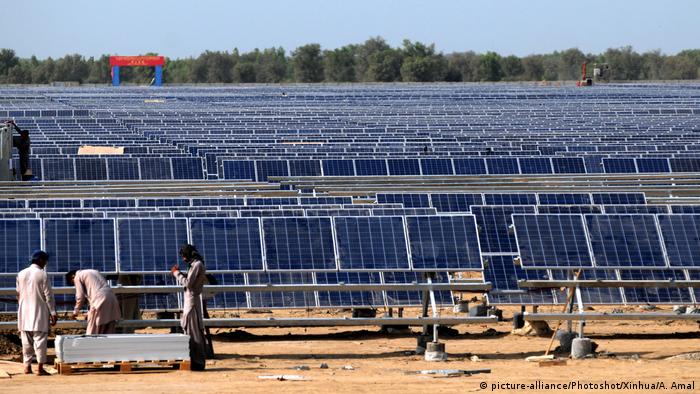 Pakistan has immense potential for generating electricity through solar power. Almost all parts of the South Asian country are dry and hot, barring a few areas in the northwest.

However, the country currently only produces a meager 1.16% of its electricity through solar power and 64% with fossil fuels. Other electricity sources include hydropower at 27% and nuclear at 5%. Renewable energy sources count for only 4% of total electricity production.

Despite being located in a region severely affected by climate change, Pakistan continues to invest in environmentally unfriendly methods of power production.

Recently, the government approved seven Chinese-funded coal power projects, which will add up to 6,600 megawatts to the national grid in the coming years.

Last year, Prime Minister Imran Khan's government promised that Pakistan would produce 60% of its electricity from renewable sources by 2030. This would require Pakistan to install around 24,000 megawatts of solar and wind power capacity by 2030, up from just over 1,500 megawatts now.

Health centers in Pakistan: Harnessing the power of the sun

Environmentalists have said that building solar power is well within the nation's capabilities, if there is enough political will to support development.

Hassan Abbas, an environmentalist, told DW that Pakistan could conceivably generate more than 2,900 gigawatts of solar power capacity. For reference, 1 gigawatt could power 110 million LED lights, according to the US Department of Energy.

"There are influential bureaucrats, policymakers and hydropower lobbies that are against solar energy," said Abbas.

"An outdated solar system installed in Punjab by China lent credence to the claims of skeptics who assert solar would not work in Pakistan," he added.

Abbas said that developing solar power would be cheaper than hydroelectric power, and claimed that a $10 billion (€8.3 billion) investment in solar power could generate 50 to 60 gigawatts of capacity. This would represent 10 times more than what is produced from the Tarbela and Mangla dams, two large hydropower projects.

What is holding solar power back?

Ghazala Reza, a Pakistani energy expert, told DW that many factors are keeping solar power from flourishing. These include complications in finding space for solar farms, procedural delays in construction approvals and unattractive tariffs for selling power to national grid.

"Lack of political will and reluctance of government investment dash the hopes of generating electricity through this sustainable method," Reza said.

Economist Shahida Wizarat said the high costs of initial investment is hampering the growth of solar power, even if diversifying energy sources makes economic sense in the long run.

However, not all Pakistani economists agree. Azra Talat Saeed warns against investing heavily in solar power without taking all factors into consideration. She told DW that although solar power is much better for the environment than fossil fuels, solar technology runs the risk of increasing Pakistan's dependence on technology owned by the US and China.

"Solar panels also occupy much space if installed on a massive scale, this could greatly hurt our agriculture, exacerbating food insecurity. Their durability is also an issue besides the huge initial investment, which can only be made by big landlords and not by poor farmers," Saeed said.

Energy expert Reza added it would be a bad idea to dismantle existing power plants, which can operate for decades, in exchange for solar power.

"Pakistan invested billions of dollars in hydro and thermal plants. Many of them can work for years. Scrapping them would be a financial disaster," Reza said.

Environmentalist Abbas said that although the government should not dismantle existing plants, it should not make new investments in environmentally unfriendly power projects.

Pakistan still suffers from power shortages caused by shaky transmission infrastructure, and localized solar power projects could be a solution.