Why bitcoin is valued in Zimbabwe | Business | Economy and finance news from a German perspective | DW | 20.11.2017

Why bitcoin is valued in Zimbabwe

This year has seen cryptocurrency bitcoin shatter all growth expectations, continuing to defy dark predictions. In Zimbabwe, its growth has been particularly striking, all the more so amid recent political turbulence. 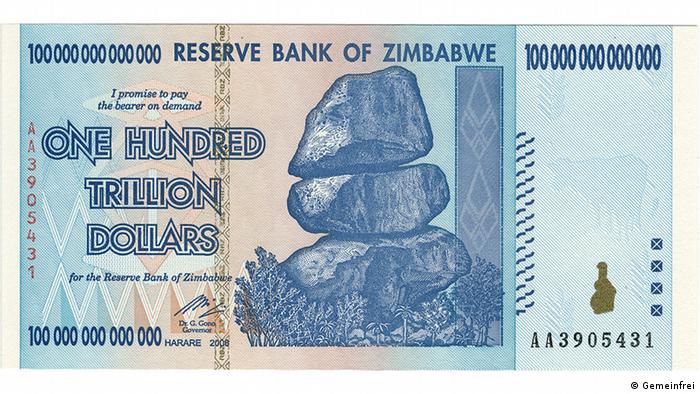 Sometimes, history is best told through the things we can hold in our hands. Keeping that in mind, the Zimbabwean 100-trillion-dollar bill provides an unusually vivid insight into that country's largely woeful modern economic story.

No legal banknote in history had more zeroes, yet it was practically worthless — at best, it would have bought you a loaf of bread. Ironically, the note today is a pricey, sought-after collectors' item, having bitten the dust as legal tender shortly after its introduction when the Zimbabwean dollar was abandoned as a currency in 2009.

A few short months before that economic nadir, an entirely new form of currency had mysteriously emerged, a long way from the street markets of Harare. The origins of bitcoin, now the world's most famous cryptocurrency, remain cloaked in mystery. The person credited with its introduction is known as "Satoshi Nakamoto," but its real identity remains a source of considerable speculation.

Like the old Zimbabwean dollar, speculation is a major part of the bitcoin story. It has known — indeed, it is known for — dramatic highs and lows. Unlike the Zimbabwean dollar though, bitcoin appears to be here to stay and, in another great economic irony, is establishing ever-deepening roots in Zimbabwe, where its value is currently higher than anywhere else.

Rapid growth, in Zimbabwe and beyond

Bitcoin has been popular in Zimbabwe for quite a while now. After the country's hyperinflation crisis of 2008 and 2009, huge amounts of personal savings were lost and Zimbabwean citizens were understandably eager to find new ways to secure their own savings and assets.

Out of reach of the country's unique brand of political and economic turmoil, bitcoin became an increasingly attractive store of value for many citizens and the situation has accelerated dramatically in 2017, particularly in recent weeks as the political crisis around the future of 93-year-old President Robert Mugabe continues to rage.

Bitcoin's global growth this year has been staggering enough, having gone from a value of less than $1000 (€851) per bitcoin at the start of the year to being worth over $8,000 at the time of writing. Yet in Zimbabwe, it is worth almost double that global rate. At the time of writing, bitcoin was trading on Golix, the Zimbabwean bitcoin exchange, at $13,750.

While bitcoin is still viewed with considerable suspicion in many established global financial quarters — the CEO of US banking giant JP Morgan Chase called it "a fraud" as recently as September — for Zimbabweans with painful memories of the gauntlet their own haunted currency ran, they view it as a far safer bet than most of their other options.

A question of trust?

"Since the collapse of the formal economy, money has been hard to find in Zimbabwe — literally real, physical money," Lorenzo Fioramonti, professor of political economy at the University of Pretoria, told DW.

"Bitcoin had a surge in value a few years back in Zimbabwe and from what we can tell it's mostly used as a transactional device, but not so much for local payments. It's primarily for remittances. There are so many Zimbabweans working abroad and they are sending the money home with bitcoin."

When the Zimbabwean dollar went out of use in 2009, it was replaced on the streets with various other, more secure global currencies such as US dollars and South African rand. However, they too are now in sharply falling supply in their physical form, and as the political uncertainty continues, Zimbabweans, both at home and abroad, are increasingly willing to put their trust in bitcoin as a means of securing the value of their own money.

"If I have $500 in the bank I won't get it back and I will be losing value, but when I have my bitcoin, it is going up every day," Arnold Manhizwa, an IT worker in Harare, told Reuters last week.

The trend toward bitcoin, while evidently strong in unstable political climates such as Zimbabwe, is a worldwide one, according to Shireen Ramjoo, CEO of Liquid Crypto-Money, a company that provides corporate training in Africa on various aspects of bitcoin investing.

"In South Africa, a lot of people are starting to use bitcoin," she told DW. "I just came back from a conference in Nigeria, and the market there is really big. People worldwide are looking for alternative currencies where they can actually see and feel that they have value."

Currency you can believe in?

While the fluctuations in bitcoin's value will continue, both in Zimbabwe and beyond (concrete confirmation of a Mugabe departure might neutralize the current surges, for example), both Ramjoo and Fioramonti believe the cryptocurrency, and the multiple other currencies it has spawned, are very much here to stay despite the many predictions to the contrary.

"As it gets more regulated, the perception is that it's getting stronger," says Ramjoo. "Honestly, I believe that bitcoin is the future of money but not bitcoin alone. It actually opened up an avenue for us to have several centralized cryptocurrencies that we are starting to see on the market," she said, citing the fact that Tunisia now has its own government-issued cryptocurrency.

Fioramonti is also convinced of the future worth of cryptocurrencies such as bitcoin and also of other decentralized, localized currency alternatives.

"The conventional idea that you need one system of currency or the other is so wrong," she says. "I think in the future, we are not going to have bitcoin and nothing else. We are going to have a variety of systems of which bitcoin will be just one."

Zimbabweans would probably agree. That means that unlike the fabled 100-trillion-dollar bill, bitcoin will likely become a collectors' item for bank accounts, rather than for the trinket-covered walls of the world's pubs and bars.