Why Bangladesh student protests are not just about road safety | Asia| An in-depth look at news from across the continent | DW | 08.08.2018

Why Bangladesh student protests are not just about road safety

The focus of recent student demonstrations in Bangladesh was road safety and law enforcement in the country. But analysts say the massive protests also reflect a deeper anger against the entire political system. 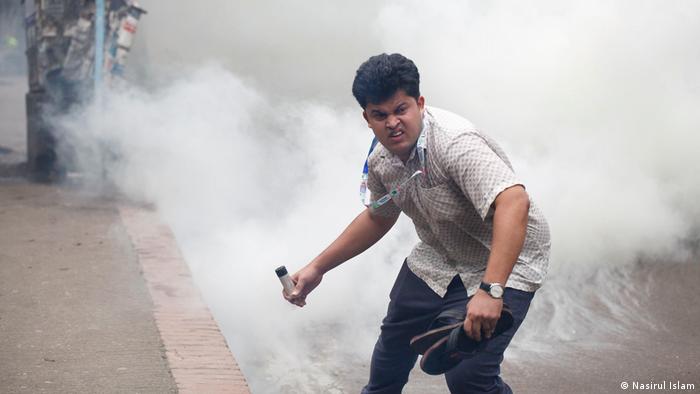 The main streets of Dhaka, Bangladesh's capital, returned to normalcy on Wednesday after days of violent student protests.

The demonstrations were sparked by the killing of two teenagers by a speeding bus on July 29. At least 7,397 people — around 20 on a daily basis — lost their lives in road accidents last year, according to the non-governmental Passengers Welfare Association.

To quell the protests, Bangladeshi security forces launched a massive crackdown on protesters. More than 150 students were wounded in clashes with police and government supporters. At least 20 journalists were reportedly beaten up by the youth wing of the ruling Awami League party. Police arrested many protesters and activists, including Shahidul Alam, one of Bangladesh's top photographers and activists, for supporting the students.

Although the protests have largely subsided, the government's use of brute force has exposed the political fault lines in Bangladeshi society.

"Authorities have arrested scores of social media activists under the 2018 digital security act," Nur Khan, a Dhaka-based human rights activist, told DW. "The protesters wanted justice, but they were mishandled by the security forces," he added.

Anger against the system

While the student protests were mainly focused on road safety, analysts say they also reflected the people's growing frustration with the government.

Michael Kugelman, a South Asia expert at the Washington-based Woodrow Wilson Center, believes that the protests were an expression of longstanding, pent-up anger about the government and its policies on the whole.

"It's hard to imagine that the mere issue of traffic safety — important though it may be — could spark such a widespread and sustained period of dissent," Kugelman told DW. "The road safety issue is the straw that broke the camel's back; these large protests were rooted in much deeper and complicated grievances."

Ali Riaz, a professor at Illinois State University, shares a similar view. He said the protests reflected broader issues including "the absence of accountability in governance and the absence of rule of law."

"A simmering discontent among the youth about the direction of the country has surfaced through this movement. Their slogan, 'We want justice,' is quite telling in this regard," he told DW.

While it is unclear whether the students can sustain these protests, political observers are of the view that they have already conveyed a strong message to Prime Minister Sheikh Hasina's government.

"Whatever happens to the movement in the coming days, however it ends, the younger generation has demonstrated that they can challenge the prevailing culture of fear," underlined Riaz, adding that "their courage will have an indelible mark on Bangladeshi society and politics."

The latest student protests were the second over the past several months that took Bangladeshi authorities by surprise.

In April, scores of university students took to the streets to protest against a "quota system" in government jobs.

Analysts say the government's use of force against students, just months before the general elections, could create problems for PM Hasina.

Around 23 million Bangladeshi youth will cast their votes for the first time in December's election. These votes are likely to swing the polls in any party's favor.

Golam Mortoza, a Dhaka-based political analyst, believes the young generation is unlikely to vote for the ruling Awami League party.

"The youth won't forget the repression unleashed by the incumbent government during the protests," Mortaza told DW.

It is unclear whether opposition parties will be able to cash in on the anti-government sentiment, but political analysts and rights activists say the citizens' anger against the country's political system is definitely mounting.