Police and the supporters of Bangladesh's ruling party clashed with students who were protesting poor road safety. More than a 100 had to be treated in hospital, many appearing to have injuries from rubber bullets.

A week of student protests in Bangladesh culminated with police clashing with students on the streets of Dhaka on Saturday, according to reports from the scene.

"A few of them were in very bad condition," Shabbir said.

Witnesses reported police using tear gas, batons, and rubber bullets in the Jigtala neighborhood of Dhaka's Dhanmondi area. Others reported seeing civilians, believed to be supporters of the ruling Awami League party, joining in the crackdown.

"It's not true," he told the AFP news agency. "Nothing happened at Jigatola."

Students launched country-wide protests last week, after speeding bus plowed into a crowd killing two teenagers and injuring nine others.  Protesters see the incident as a symptom of disregarding road safety standards in a country where drivers often operate vehicles without qualifications or documents.

The protesters put up roadblocks in Dhaka and other parts of Bangladesh. They also stopped and controlled thousands of vehicles, including those belonging to high-ranking officials and judges, to control their papers. Some buses were also vandalized by the protesters.

"We don't want to be killed [by a] road crash," 10th grader Mohammad Selim told the Deutsche Presse-Agentur news agency. 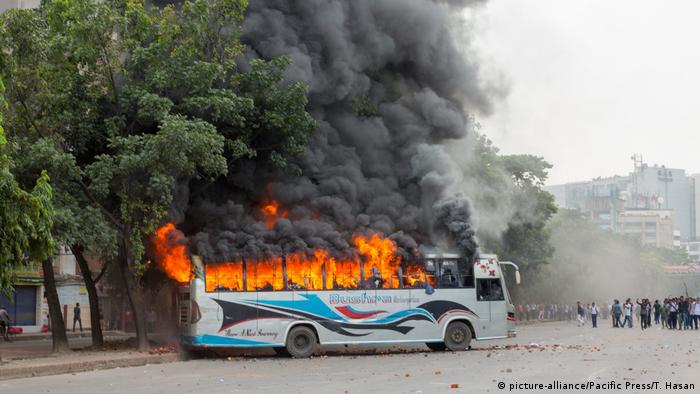 Protests intensified after Shipping Minister Shajahan Khan, who maintains close ties to transport unions, made an insensitive comment about the unrest.

"A road crash has claimed 33 lives in India's Maharashtra; but do they talk about it the way we do?" Khan said, referring to a deadly accident in neighboring India earlier that week.

The minister's comments prompted widespread criticism by social media users in Bangladesh, with some calling for him to step down immediately. Khan later apologized for his remarks.

Other officials have urged calm, saying the government will consider road safety reforms. However, their pleas have done little to discourage students from taking to the streets.

Bangladesh recently launched its first satellite, marking the nation's entry into an elite space club. While the satellite filled many Bangladeshis with joy and patriotism, some question its commercial viability. (16.05.2018)

Over four million people in the Indian state of Assam have been stripped of their citizenship, with rights groups claiming the government is targeting Muslims by using the pretext of tackling Bangladeshi immigrants. (31.07.2018)

Since 2013, Islamist assailants wielding machetes and knives have killed more than 30 people in Bangladesh. The targeted attacks on liberal bloggers, freethinkers and atheists have created a climate of repression. (21.04.2018)