Why are Indians protesting against a new military hiring plan? | Asia | An in-depth look at news from across the continent | DW | 21.06.2022

Why are Indians protesting against a new military hiring plan? 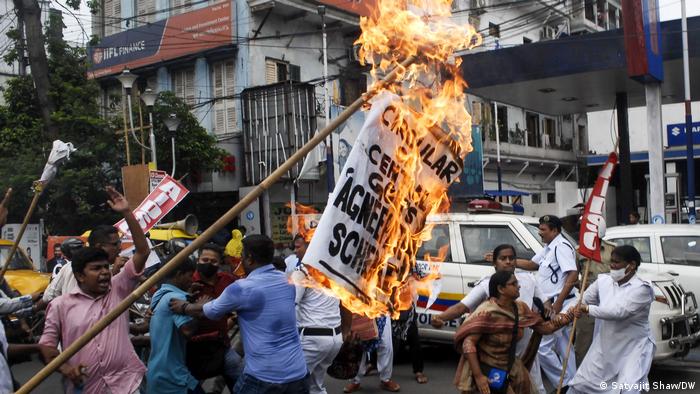 The Agnipath, or "path of fire," plan is designed to bring more people into the military on four-year contracts

Large parts of India have been engulfed by protests, with thousands of disgruntled youth setting ablaze trains, attacking homes of political leaders and damaging public property in protest of the government's new military recruitment policy.

Prime Minister Narendra Modi's government on June 14 unveiled a plan called Agnipath, or "path of fire," designed to bring more people into the military on four-year contracts and to lower the average age of India's 1.38 million-strong armed forces.

Under Agnipath, about 46,000 cadets will be recruited this year, and only 25% will be kept on at the end of their four-year terms. The cadets will go through training for six months and will then get deployed for three and a half years.

Top defense officials say the plan is a transformational reform implemented to revamp security infrastructure and cut salary and pension costs, which account for more than half of India's over-$75 billion (€72.6 billion) defense budget.

"The government had little choice but to implement the Agnipath scheme, given the high cost of military manpower, which left little money for equipment modernization," Ajai Shukla, a retired colonel and defense analyst, told DW.

"While there will also be benefits such as a reduction in the average age of the military, the key reward will be that personnel retiring after four years will not have to be paid pensions," Shukla said.

SK Chatterji, a retired brigadier who supports the plan, told DW that it's in tune with military recruitment processes globally.

"It will lower the average age from 32 to 26 and give the youth opportunity to serve the country. But, importantly, it saves pension budget that will allow for more capital budget," he said.

Chatterji said there would be adequate employment opportunities for the 75% of the soldiers who will have to leave the military following their four-year stint.

The plan sparked violent protests in parts of the country, with thousands of young men attacking train coaches, burning tires and clashing with officials.

The Railway Ministry said more than 500 trains had been called off on Monday in view of calls for protest strikes.

One of the biggest concerns is the fate of the soldiers after they finish their term.

The protesters say the plan will deprive them of the opportunity of a permanent job in the military, and with it a guaranteed pension, other allowances and social status.

"We prepare for years to become soldiers in the armed forces as it brings prestige and a regular income. How can we expect this package where there is no certainty of our future and families?" Pradeep Lal, a protester from Haryana state, told DW.

Manoj Pandey, a candidate from Bihar, questioned the rationale behind the plan.

"There has been no recruitment at the soldiers level within the armed forces for the last two years because of the pandemic. What is the logic in coming out with such a scheme?" Pandey told DW.

"How can we be committed to the armed forces given the absence of financial support after such a short tenure?" he said.

'Four years is too short a period'

Some defense experts have criticized the plan, arguing that it could weaken the structure of the armed forces and have serious ramifications for national security.

"The growth in an army unit takes a certain amount of time, and four years is too short a period in the Indian milieu to gain that experience. Soldiers after retirement have no choice but to take up demeaning jobs," Jaswinder Singh, a retired major, told DW.

The military is the second-biggest employer in the country, after the Indian Railways, and receives millions of applicants every year. And for many people, serving in the military confers social status and prestige. 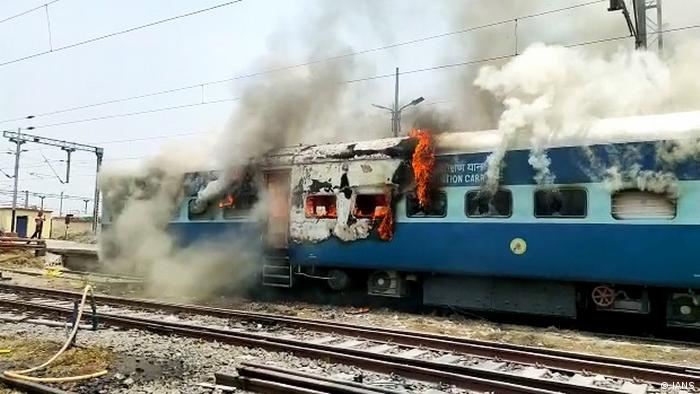 Yamini Aiyar, president and chief executive of the Centre for Policy Research, a think tank, told DW that economic vulnerability, especially high unemployment and the social value of government jobs lie at the heart of the ongoing agitation against the new plan.

"Being in the military confers status, prestige and position to individuals. Agnipath has stripped our young of this opportunity for status and mobility while offering no real alternatives," Aiyar said.

"These are demands of desperation in an economy with limited opportunity," she added.

In an effort to end the protests, the government tweaked some of the rules to pacify the angry demonstrators by adjusting parts of the plan to offer more soldiers federal and state government jobs after their service.

The federal Home Ministry said it would reserve 10% of vacancies in the paramilitary forces and the Assam Rifles, a unit in the Indian army, for people who leave the army under the plan.

The Defense Ministry said it would reserve 10% of its vacancies for people who complete the program.

Lieutenant General Anil Puri, additional secretary in the Defense Ministry, told reporters in New Delhi on Sunday that the government will ensure that people  enrolled under the plan find suitable jobs when they exit military service.

But he said anyone participating in violent protests would not qualify for the defense services under the scheme.

"Every individual who wants to join the armed forces through the Agnipath scheme will have to submit a pledge that they were neither part of any protest nor were involved in any violence," Puri said. "Military is based on discipline," he added. "There is no space for arson or vandalism."