Why are Germans afraid of the stock market? | Business| Economy and finance news from a German perspective | DW | 12.02.2016

Why are Germans afraid of the stock market?

Germans, famously prudent folk, are gradually investing more of their money in stocks. But the overall number of shareholders in Europe’s largest economy is still low for such a powerful, export-driven nation. 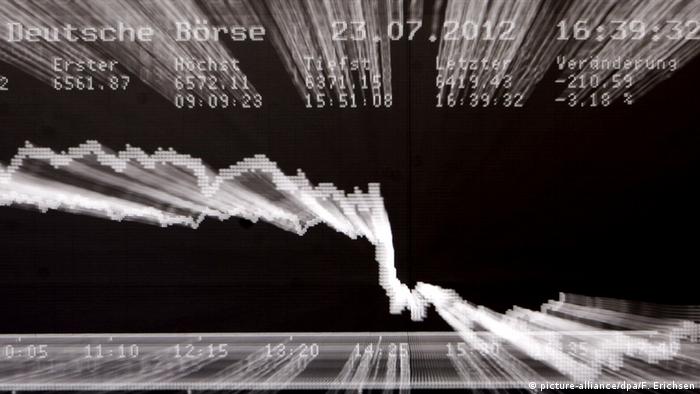 The Germans have a word for their widely-held aversion to owning stocks. It's called being “börsenscheu,” literally “market shy.”

The word reflects an almost instinctive apprehension toward financiers, whose appetite for risk runs contrary to the virtues embodied by the famously frugal Swabian housewife.

So it seemed somewhat counterintuitive when, earlier this week, the Deutsches Aktieninstitut (DAI), a shareholder lobby association, announced that the number of Germans investing their money on the stock market had hit a three-year high.

Germany's blue-chip DAX index has slumped below 9,000 points for the first time since 2014 amid a global shares sell-off caused by renewed fears for the health of banks and persistent worries over China's economy. (08.02.2016)

Share markets around the world have tumbled as fears over the health of the global economy caused a fierce sell-off in banks and commodity stocks. Europe's top share index slumped to its lowest in two and a half years. (11.02.2016)

Stocks have taken another beating as the price of oil continues down its slippery slope. From Frankfurt to Hong Kong, shares dipped. And unease over slower growth in China is only making things worse. (20.01.2016)

Releasing its economic forecast for 2016, the German government projected moderate GDP growth, with weaker export demand from a slowdown in developing countries offset by stronger domestic demand thanks to rising wages. (27.01.2016)

Business outlook clouding over in Germany

Business confidence among German managers has dropped to levels not seen since February 2015. The Ifo economic research institute said recent stock market routs had been weighing on executives' moods. (25.01.2016)

In 2015, just over 9 million Germans owned stocks in some capacity, whether by directly investing in companies, or through a mutual fund or workers' shareholding scheme.

That number is still a far cry from the 13 million people who had stocks at the height of the dot-com bubble, but it is nonetheless on the upswing.

Yet regardless of any positive trend, 9 million people in a country of 81.3 million is low for an economy as robust as Germany's. Nearly half of all Americans, for instance, invest in some way in the stock market, according to a recent survey.

In addition to tax rules that could be seen as disincentivizing investing, historically, Germany has always had a more or less functional pension system.

“We are not taught that building our own fortunes will allow us to enjoy some extra income later in life,” Fey told DW. “You have these ingrained behavioral patterns in Germany that show a large aversion to risk.”

Some of the reluctance to buy equity also comes from memories of past stumbles that refuse to fade. In 2001, it was the bursting of the dot-com bubble; in 2003, the implosion of the Neuer Markt, a technology index on the German stock market styled after the NASDAQ.

There were also a number of high-profile IPOs that went awry. In 1996, for instance, the German government privatized Deutsche Telekom and had to raffle off shares because demand was so high. Many people saw Telekom as a sure-fire way to make some money - until the share price tanked and dragged Germans' confidence down with it.

The fact that the Telekom debacle still stings betrays another idiosyncrasy of Germans' trading habits. Generally speaking, Germans tend to have a shrewd sense of when to sell, Fey says. But their problem is not always knowing when to buy back in.

If the 2011-2015 bull market in Germany explains why people gradually began to buy more stocks, the fact that the Dax index has shed 28 percent of its value since peaking at 12,374 points last April could make people skittish again.

If history is any indication, bear markets are seen as less an opportunity to invest than a reason to steer clear of stock markets.

The timing isn't optimal. Germany's historically reliable pension system is in for a shock as the country's population dwindles and fewer able-bodied workers pay into the system.

But while the number of Germans younger than 39 with stock portfolios jumped 10 percent from 2014 to 2015, only 7 percent of people in their 20s had any equity at all. For those in their 30s, that number was 13.6 percent. Indeed, most equity is concentrated at the top of the age scale.

One of those people is Georg Salzeder, a 59-year-old steel broker from Bavaria. He had Telekom stock when it crashed, but that didn't deter him from buying shares in other companies, especially German heavyweights.

“Anything can happen,” he told DW. “I'll keep investing. For me, there's no other way.”