Who would be the greenest French president? | Environment | All topics from climate change to conservation | DW | 11.04.2017

Who would be the greenest French president?

Far-left Jean-Luc Melenchon is surging in the polls, accusing his centrist rival Emmanuel Macron of cozying up to companies that harm the environment. But where do the candidates really stand on environmental issues? 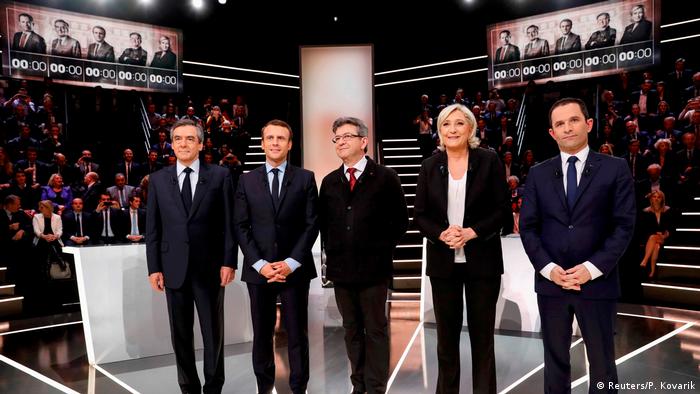 With just a few days to go until the French presidential election, the focus has quickly turned to far-left candidate Jean-Luc Melenchon, who is enjoying a sudden surge.

Much of the far-left firebrand's rise has come at the expense of the pro-EU centrist Emmanuel Macron, the former investment banker and economy minister who launched an insurgent candidacy by creating a new political party last year. Melenchon has accused Macron of being too close with business interests.

Melenchon has cast himself as the most environmentally-friendly candidate on the ballot, and the message seems to be resonating. According to figures from polling Kantar Sofres published Monday, he is now polling at 18 percent, above the center-left and center-right candidates from the country's two biggest parties, Benoit Hamon and Francois Fillon.

Melenchon is nipping at the heels of the two insurgent candidates who have been leading the race for most of this year: Macron and the far-right nationalist Marine Le Pen, who each stand at 24 percent. The top two candidates in the election's first round on 23 April will go head-to-head in a second round on 7 May.

Like in last year's US election, the issue of climate change has not been at the forefront of the French campaign. At the first presidential debate between the top five candidates in March, Melenchon was the only candidate to bring up the issue. As across the Atlantic, the big issues of economy, war, terrorism and migration have crowded out climate concerns.

But Laurence Veyne, a campaigner with Greenpeace France, says that though these issues haven't featured heavily in debates, this year the candidates have included environmental issues in their platforms in a much more robust way than in years past. All of the candidates except Fillon have been keen to stress they will ban exploration for shale gas in France, and all would take action against hormone-disrupting chemicals.

The issue of nuclear power has divided the candidates and come up routinely during the campaign. 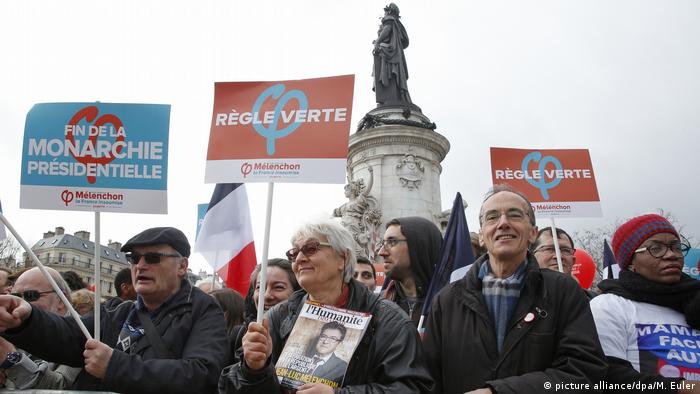 Even Marine Le Pen has been keen to cast herself as a champion of the environment, a position which contrasts sharply with Donald Trump in the United States.

"It's now in all the programs, all the candidates tried to say something about these issues, so we were able to make a comparative analysis of all the programs," Veyne told DW. "But the issue is only central to two of the main candidates - Hamon and Melenchon.”

Greenpeace France views these two leftists candidates as the most environmentally-friendly, while the organization says Le Pen and Fillon are the most problematic. They are still unsure about Macron, Veyne says, and it is this unease which Melenchon has been able to tap into in recent weeks.

"The problem with Macron is he has some very good things, but they are sometimes in contradiction," Greenpeace's Veyne said.

"We don't know if what he's saying is really to support the environment, or if it's just words and in fact he will just continue business as usual."

Veyne says that Greenpeace views Melenchon as going "deeper than Hamon in his environmental approach". But she adds that the group is concerned about Melenchon's anti-EU positioning. He has said that the structure of the EU should be wholly redesigned, and if it cannot be, France should leave the bloc.

"The place of Europe is an environmental issue, because the EU has brought environmental protection that is important to preserve," she said. "It could be very dangerous to change the way Europe is organized, or to leave Europe, so we should be careful."

On this question Greenpeace is in line with business groups, who are also worried about Melenchon's radical rhetoric on the EU which sometimes sounds similar to that of Le Pen. Medef, the French business association, has said it is concerned about the anti-EU and anti-globalization rhetoric seen on the campaign trail.

"Never before has globalization been so much criticized as a cause of the social and economic problems that our country is going through," said Pierre Gattaz, the group's president.

DW dived into the contenders' platforms to see what each of these presidencies would mean for the environment.

Macron would leave in place most of the climate and environment policies of the outgoing Socialist government, of which he was formerly a part. 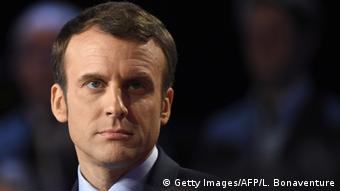 He would maintain the government's target to reduce nuclear power's share of the French energy mix from 75 percent today to 50 percent in 2025. He would replace this with renewable energy, instituting a new target to double France's wind and solar capacity by 2022.

He says he would also grant no new hydrocarbon exploration permits, and close all coal power stations in France within five years.

Other ecological measures include a promise to insulate one million homes in five years, and a cash-for-clunkers regime in which people would get 1,000 euros ($1,060) toward the purchase of new vehicles that pollute less. On a broad scale, Macron's vision is for stronger environmental action at EU level, rather than splintered national policies.

Le Pen has in the past cast herself as an environmental champion, but with a nationalist approach. She launched a "New Ecology” movement in 2014 that says international climate talks should be abandoned in favor of national action.

She is fervently opposed to wind power for aesthetic reasons, and would institute a complete ban. Instead, she would use public funds to "massively develop" other renewables, particularly solar and biogas. Unlike Macron, she would promote and increase nuclear power. She is also keen to promote hydrogen as a clean energy that would reduce French dependence on oil imports, promising state investment into research and into hydrogen cars. 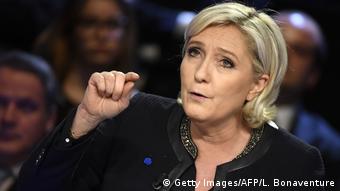 Le Pen has presented her anti-free-trade "intelligent protectionism" plan as an environmental good, because it would mean products are consumed closer to where they are produced. "The true environmentalism is to produce and consume as closely as possible and recycle on site," she wrote in her manifesto. She has also promised a complete ban on "fracking" extraction of shale gas.

Greenpeace isn't buying it. "We know that her party (the Front National) didn't care about the environment before 2014," Veyne said. "Her positions are contradictory. Local procurement is good, but she continues to support industrial agriculture in France. So we cannot say she has a solid environment program at all."

Melenchon has put forward the boldest ideas for increasing French environmental stewardship. He wants to enshrine a "green rule" in the constitution which would state that the need to balance the budget would not apply when it would pose a threat to national resources. 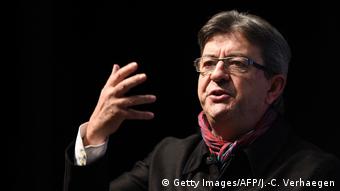 It would also prioritize the protection of "common goods," such as air and water, over revenue. Melenchon would also set a goal to produce 100 percent of energy from renewable sources by 2050.

Melenchon's vision of France's future represents a change as radical as that promised by Le Pen. This offers new possibilities for campaign groups like Greenpeace, and they like what they see in his program. But there is concern than his radical plans to not only completely reshape the French Republic, but also the European Union, might leave him little time to implement any of his promised environmental reforms.

Like Le Pen, Fillon would scale up French nuclear power. Like Macron, he has pledged to phase out coal-fired power stations - without giving an end date.

But unlike Macron, he is opposed to further subsidies for renewables. Instead he favors market mechanisms such as the EU's Emissions Trading Scheme to solve the climate challenge. He wants to intervene in the market to set a carbon floor price of 30 euros ($32) per tone of carbon. Rather than subsidies, he would use the proceeds to fund a tax credit for renewable energy. 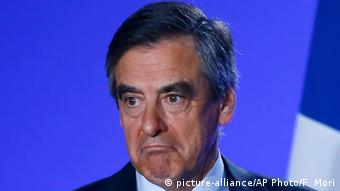 Most significantly, Fillon would amend the environmental charter added to the French constitution by center-right president Jacques Chirac in 2005. That charter states that the state can intervene any action that it deems to pose a serious and irreversible threat to the environment. He says this law is hampering innovation on environmental issues. He is the only candidate proposing to do away with it. This, Veyne says, makes Greenpeace "very worried."

Fillon is also the only candidate who would not continue France's ban on shale gas exploration, and has called the ban "criminal."

Hamon would largely carry over the policies of outgoing Socialist Francois Hollande, but would add a few additional policies of his own. 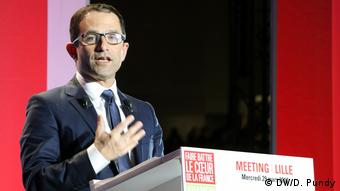 Socialist presidential candidate Hamon would push for an alternative for pesticides, among other things

Like Melenchon, he would set a 100 percent renewable energy goal for 2050. He also wants to phase out diesel fuel, with no new diesel cars after 2025. He would phase out nuclear power over the next 25 years, and make a push for alternatives to pesticides.

While environmentalists may like what they see in Hamon's plan, the Socialist nominee is tainted by his association with outgoing Socialist President Francois Hollande.

"He's from a party that has not implemented its promises," Veyne said. "The problem for Hamon is that legacy."