World Health Organization experts have begun their fact-finding mission on the origins of the global coronavirus pandemic. But it is not yet clear where they will be allowed to go and who they will get to talk to. 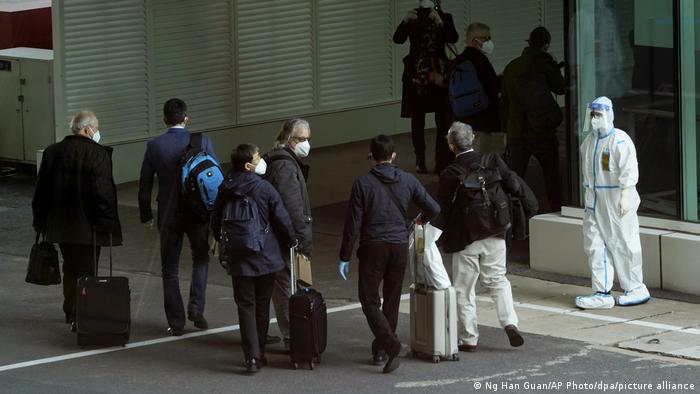 A World Health Organization (WHO) team emerged Thursday from a Wuhan hotel used for a 14-day quarantine and boarded a bus to begin its probe into the first known coronavirus cases.

Outside the hotel, reporters were kept distant by yellow entrance barriers.

It was not immediately clear where the team's masked members were headed in the central Chinese city. Despite a tough early lockdown, nearly 3,900 people died from the virus in the city, according to Chinese figures.

A so-called wet market where wild animals were sold as food is the speculative source of the pandemic. It has killed more than 2 million people worldwide, infected more than 95 million, and gutted the global economy.

Beijing has floated the unsubstantiated theory that the virus emerged elsewhere.

"The international team working to understand the origins of the #COVID19 virus completed its 2-week quarantine in Wuhan, #China on Thursday," the WHO tweeted. "As members start their field visits on Friday, they should receive the support, access and the data they need."

Relatives of Wuhan's coronavirus dead have sought a meeting with the UN agency-led team, saying since it arrived they have faced heightened official Chinese obstruction.

"This shows that (Chinese authorities) are very nervous. They are afraid that these families will get in touch with the WHO experts, said Zhang Hai, 51, whose father died early in the Wuhan outbreak.

Relatives allege that SARS-CoV-2 — the virus behind the COVID-19 pandemic — burst beyond control when it first emerged in December 2019 and that Wuhan and provincial Hubei province administrations bungled the initial response.

Earlier this month, a panel of independent experts concluded that China and the WHO could have acted more quickly, instead of waiting until January 30 last year to declare a global health emergency.

The panel called for global rethink on handling alerts.

"Viruses move in minutes and hours rather than days and weeks, especially in the highly mobile and interconnected world of today," said Helen Clark, a former New Zealand prime minister and former UN development executive.

The WHO was also constrained by its lack of funding, said Johnson Sirleaf.

"The bottom line is WHO has no powers to enforce anything," she said. "All it can do is ask to be invited in."

Thursday's investigation in Wuhan only came about after considerable wrangling.

That prompted a rare WHO complaint that China was taking too long to make arrangements for the visiting experts. China has repeatedly defended its response a year ago.

On Wednesday, Foreign Ministry spokesperson Zhao Lijian asserted that the WHO and global experts had "given their full affirmation" of China's past origins-tracing work.

"Both sides have a basic consensus on cooperation on origins-related research, and related work is progressing smoothly,'' said Lijian.

As 2020 comes to an end, life is normal again in Wuhan