The UN health body has given the new variant a name and said it is a "variant of concern." The World Health Organization has urged against hasty travel curbs while it gathers more data. 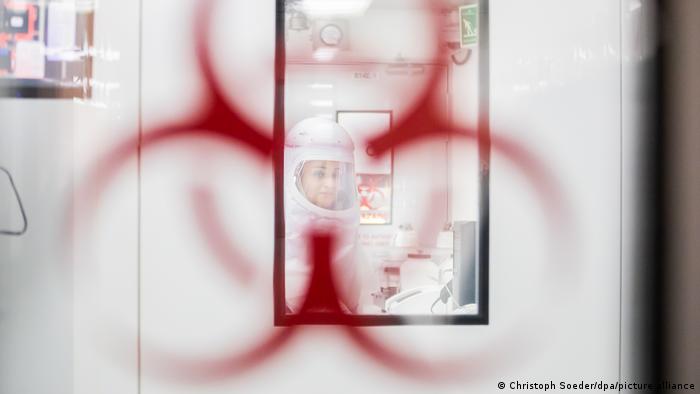 WHO experts have met in Geneva to discuss the new variant

The World Health Organization (WHO) on Friday classified the new B.1.1.529 coronavirus variant as a "variant of concern" and gave it the name "omicron."

The WHO held an urgent meeting in Geneva over the risks posed by the omicron variant, first discovered in South Africa.

It said the omicron variant appears to come with an increased risk of reinfection and likely has a growth advantage over other variants.

The working committee asked countries to increase surveillance and sequencing efforts and to report findings, and called on people to stay vigilant against the virus.

"Once a variant is classified as a variant of concern, it's really important that we have good SARS-COV2 surveillance around the world, including better genomic sequencing because we want to be able to detect this variant where it is circulating," the group said.

"This variant has a large number of mutations and some of these mutations have worrying characteristics," it added.

The variant has caused stock markets to plummet and led to a suspension of flights from southern African countries.

"At this point, implementing travel measures is being cautioned against," Lindmeier said.

Concerns that this variant will 'evade' vaccines

The WHO stressed that scientists are rushing to gain more information about the variant. In particular, health authorities are seeking to determine if the currently available vaccines are effective against omicron.

Ahead of the meeting, the WHO's special envoy on COVID-19, David Nabarro, told the BBC that, in his view, "it is appropriate to be concerned" about the new variant spreading in southern Africa.

"I'll tell you why — the virus looks like it will have greater capacity to evade the defenses that we've all built up as a result of the vaccinations we've received since the beginning of this year," he said.

South Africa's National Institute for Communicable Diseases (NICD) confirmed there were 22 confirmed cases of the omicron variant in the country.

Fewer than 100 full genome sequences of the variant are so far available, according to the WHO's COVID-19 technical lead, Maria Van Kerkhove.

"Everybody that's out there needs to understand that the more this virus circulates, the more opportunities the virus has to change, the more mutations we will see," she said.

Currently only 6.6% of people on the African continent have been fully vaccinated. However, fears are also growing in areas with much higher vaccination rate.

What's known so far about the new variant?

How has travel been affected?

Countries across the globe have reacted to the new variant by shutting down travel from southern Africa.

Germany, the United States, the United Kingdom, Israel and Italy are among a number of countries that have suspended travel to the region, but South Africa believes they have acted too hastily.

Correction, November 27, 2021: A previous version of this article misidentified the WHO's COVID-19 technical lead. DW apologizes for the error

Germany has become the latest country to pass the sad threshold. According to figures from the country's Robert Koch Institute, 100,000 people have now died of COVID-19. Behind every number is a name, and a person.

The World Health Organization will hold talks about the new COVID-19 variant found in South Africa. Concern over the variant has prompted several countries to suspend and limit flights from the region. DW has the latest.