What defense is there against off-the-shelf drone weapons? | Science | In-depth reporting on science and technology | DW | 06.08.2018

What defense is there against off-the-shelf drone weapons?

Small off-the-shelf drones have been used time and again to kill people. Repelling such threats is not that easy, but jammers, shotguns, shootable nets or birds of prey may help. 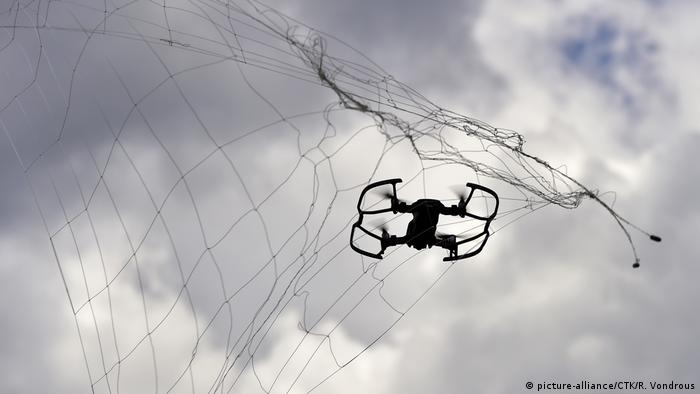 A failed assassination attempt on Venezuela's President Nicolás Maduro on August 4, 2018, reminded us once again how easy it seems to be to turn off-the-shelf drones into potentially lethal weapons.

In this case, the perpetrators had loaded two drones with 1 kilogram (2.2 lb) of explosives each. Then they apparently tried to fly them as close as possible to the president while he was addressing a military parade.

Interior Minister Nestor Reverol said that the military had "electronically" diverted one drone from its course. The second one crashed against the wall of a building blocks away from the actual target.

Use in the Iraq war

Armed groups such as the terrorist militia "Islamic State" (IS) pioneered the use of small drones to drop hand or mortar grenades with great precision on their victims. IS fighters used improvised weapons of this kind during the Battle of Mosul in April 2017. Such types of model aircraft usually cost less than 1,000 euros ($1160). Official Iraqi armed forces also later used the same method.

The internet is full of other examples of the use of inexpensive, commercially available drones for a killing mission. In addition, there are lots of videos of gun fanatics presenting their homemade armed drones.

Among them is a video of a hobbyist who has equipped his quadrocopter with a remote-controlled machine gun that he fires at dolls. To enhance the shock-and-awe effect of his show, he even prepared the dolls by fitting them with explosives. [Since original publication of this article, a reader has pointed out, that the video in question may be an animation, respectively a fake - we will continue to look into that question].

Whether reality or simply show, these examples make it clear that a good defense against drones is vital for both bodyguards and military in the field.

As far as the [possibly faked] homemade drone with the machine gun is concerned, it is questionable how dangerous it would be in a real-life deployment scenario. It could be possible to bring down a flying robot like this simply by hurling a heavy rock at it or shooting it down with a shotgun.

This is more difficult with drones like the ones we see in the video from Iraq. They can drop light grenades from a relatively great height and, being fairly quiet, are hard to detect. In addition, only experienced snipers are likely to be able to hit them.  So drones are potentially a great danger.

Specialized companies such as the Kassel-based start-up company Dedrone, which cooperates with Deutsche Telekom, rely on electronic drone defense.

This includes a sensor system that receives electronic radio data and monitors the airspace with video cameras. The system can detect drones entering a pre-defined airspace.

It identifies the flying objects via typical control commands that are transmitted to the drones by radio communication or mobile phone. It also immediately registers the drone type and construction. For example, the system can distinguish drones from birds, kites or helicopters. The software automatically tracks the drone on a video screen. 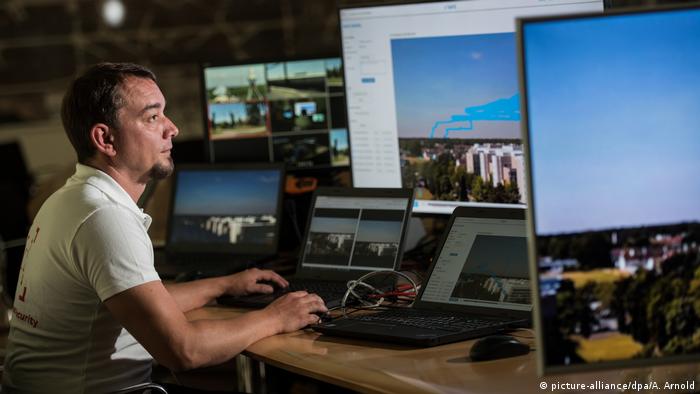 But the danger is not over as long as the drone is airborne. As a second step, authorities, such as police or judicial officers, can use a jamming transmitter with the aim of disabling the drone and forcing it to land. The German company H.P. Marketing und Consulting Wüst GmbH builds such systems.

Wüst specializes in mobile phone suppression systems that can prevent prisoners from using smuggled mobile phones within prison walls. Following the same principle, the system can also prevent drones near the prison walls from being controlled by a smartphone and delivering packages to prisoners, for example.

The system is designed in such a way that only selected individual mobile phone activities can be disrupted, meaning that activation does not paralyze all communication.

While the drone-detection technology is permanently installed in prisons, mobile systems are needed for major events such as football matches or public appearances by politicians at risk.

One such mobile antenna and camera system has been developed by Deutsche Telekom's Magenta Security division. This also includes a portable jamming transmitter from Wüst. At a Deutsche Telekom workshop in 2017, a drone was put out of action to such an extent that it had to perform an emergency landing.

Flying nets or birds of prey

Another form of drone defense is offered by Skywall. One form of it is a shoulder-held shooting device that catapults a net toward the aircraft. Once the net is wrapped around the drone, it floats to the ground by parachute.

For particularly at-risk institutions, there is even a permanently installed rotating gun turret that can be mounted on the roof of a building. It can then target automatically detected enemy drones and capture them with the flying net. 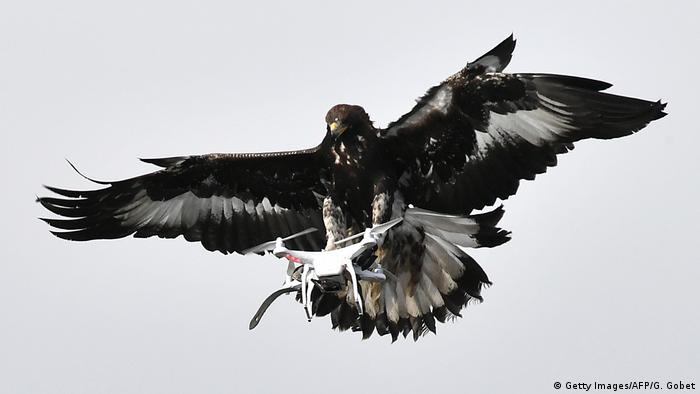 The French air force is training eagles to fetch drones

And last, but not least, various armies around the world rely on birds of prey to defend themselves against drones. The French air force, for example, is training eagles to fetch and retrieve drones in flight.

In the private sector, the Dutch company Guard from Above has developed animal-based drone control into a comprehensive business. The company is targeting military and police authorities around the world and works not only with eagles, but with other birds of prey as well.

For weeks, kites fitted with incendiary devices have been floating into Israel from Gaza. Locals fear the conflict may continue to escalate, fueled by unrest and poor humanitarian conditions in the Palestinian territory. (20.06.2018)

The world's longest-running air show has opened to aerospace industry officials and an estimated 150,000 visitors, who want to see the latest in aviation technology, including 3D-printing and electric planes. (25.04.2018)